Can a three-story building be net-zero with its own solar panels? 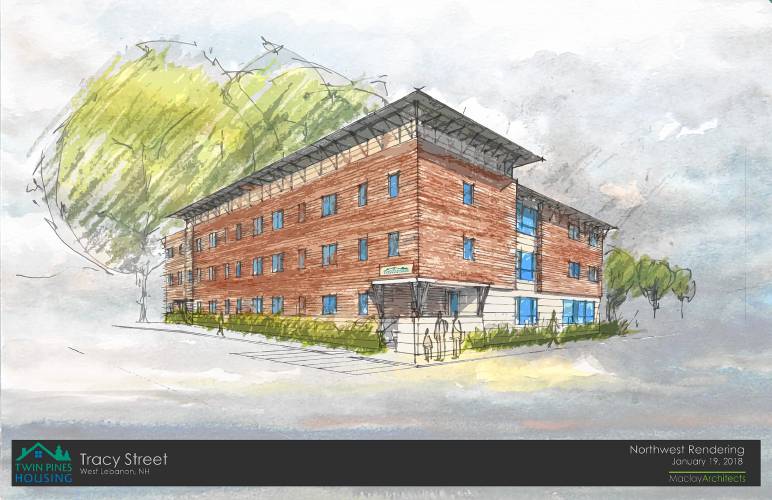 People tend to over-estimate how much electricity is put out by solar panels, so I was very dubious when I heard that a 29-unit apartment complex coming to West Lebanon would get all of its energy, including heating and cooling, strictly from panels on the building.

There’s no chance that’s correct, I told myself, secure in my poorly informed certainty. Somebody misunderstood something, I said; I’ll double-check and set the record straight.

Shows how much I know.

“There are more and more people who realize this isn’t rocket science. They have to change some practices,” said Bill McLay, an architect whose advocacy for energy savings includes his book, The New Net-Zero about design and construction methods for buildings that create as much energy as they use.

McClay is the architect for Tracy Street Community Housing, a controlled-income project created by Twin Pines Housing, which develops affordable housing throughout the Upper Valley.

When finished next year, it will be almost unique: There’s a similar “passive house” senior housing complex being built in Gilford, but that’s it for New Hampshire.

Construction has only just begun on Tracy Street but judging from drawings it will be a handsome if fairly conventional three-story apartment building.

The reason I was dubious is that number: three. When buildings get taller their volume increases and so does their energy need, but their sun-facing surface area stays pretty much the same. Solar just doesn’t seem too feasible on a taller building.

Troy McBridge at Norwich Solar Technologies in White River Junction, Vt., the contractor for the job, said this is a reasonable concern, and making it work was tricky.

“You can go net-zero on most single-floor facilities just using the roof, and it can be done with two (stories), but for a three-story to use just the roof base is unusual,” said McBridge.

McBridge said Tracy Street Community Housing will have 450 panels in four different orientations – on the roof, on cornices, vertically as siding on the south face, and some on a “small arbor over the walkway.” The total power will be 180 kilowatts DC, and will be connected to the grid via the local electric company, Liberty Utilities.

That’s really neat, of course, but as is usually the case with solar power there is plenty of unseen stuff which is just as important.

“You reduce the energy load. We can reduce it potentially by 80 percent over typical existing buildings, and 50 percent over typical new buildings. The second piece is that you then use mechanical systems – ground-source heat pump or air-source heat pump – partnered with solar or some renewable energy source. The building is still consuming energy but the power comes from renewable energy,” said Maclay, the architect.

Lots of insulation, careful design of ventilation and control systems, triple-glaze windows. These are old ideas but they keep getting better as technology and understanding evolves.

“Today, with energy modeling, we can track buildings for their actual energy use. We develop a fuel-mileage for buildings, an energy utilization index, like mileage for cars,” said Maclay.

And what about heat pumps to replace gas- or oil-fired boilers? They aren’t new, either – we’ve long known how to wring energy out of the air or underground water and use it to heat or cool a building. But the technology used to be crummy.

When I moved to New Hampshire in the 1980’s our apartment had an air-sourced heat pump and we hated it. In mid-winter it blew air that ranged from tepid to downright cool. It just couldn’t keep up.

That has changed. They’ve gotten much better, from everything I’ve read, and it seems that air-sourced heat pumps can now handle a New Hampshire winter. Tracy Street will have three of them on the roof, each connected to a number of apartments.

Key to their success is all that insulation, which greatly reduces how much work they have to do.

“If electricity went off in the apartments in the coldest weather, they would lose only three or four degrees a day. I’m pretty much convinced that you wouldn’t have frozen pipes, even if you left the heat off all winter,” said Maclay.

Sounds great but all this extra work must have cost a fortune, right? Apparently not, although it isn’t free.

Andrew Winter, executive director of Twin Pines, said construction cost $245,000 per unit, or $10,000 more than similar units in traditional buildings. That include “soft costs” like the operating reserve, but not the cost of the solar panels.

“We’re finding to do net-zero buildings, in terms of energy conservation piece, the cost is typically between $5 and $15 more per square foot,” Maclay said. But he argued that in New Hampshire, this cost is more than compensated for by lower energy bills.

“If you borrow money to pay for that additional cost, when you add up the energy cost and the extra loan cost, we’re finding that net-zero buildings typically are cash-flow positive. From day one, you’re paying less money than you would have normally,” he said. “People used to say to us, I want to do net-zero but I can’t afford it. We say you can’t afford not to do it.”

An intriguing part of this project is that is income-controlled affordable housing. Energy-saving technology is associated with high-end construction but Winter says it makes even more sense in affordable housing, where energy bills make up a higher percentage of total costs for lower income folks.

“That’s one of the things that is great here,” agreed Maclay. “This is demonstrating that solar is a way to solve problems for all levels of the economy. After all, the most important thing to do in affordable housing is to keep it affordable.”