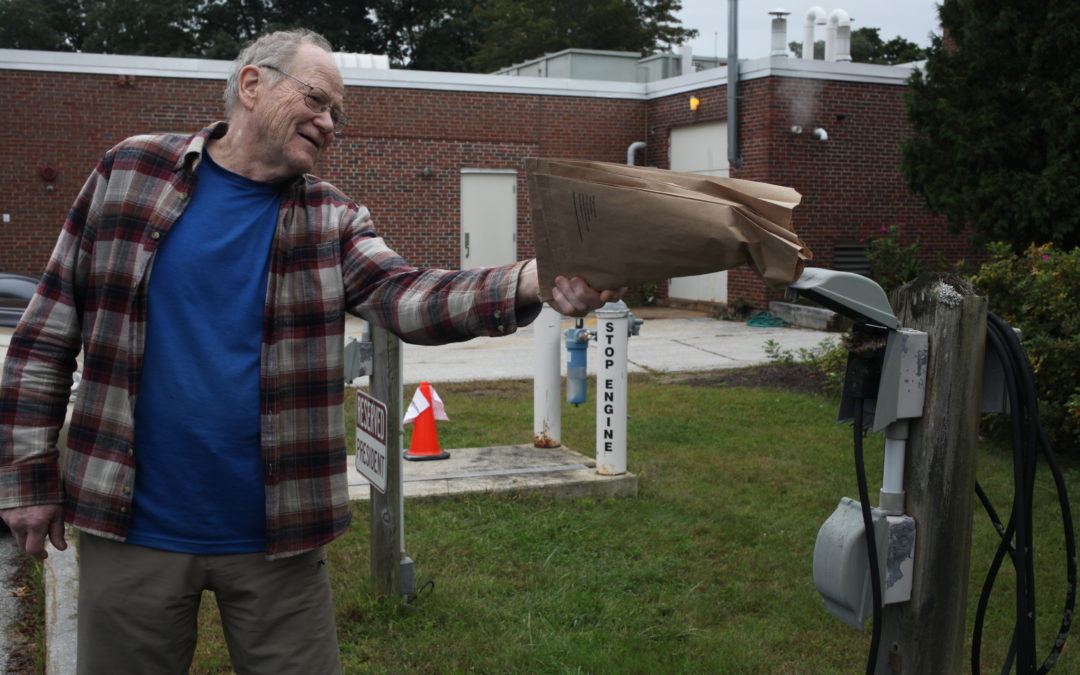 Former NHTI professor Thomas Hopper carefully checks an electric car-charging station that is used so seldom that it contains an active wasp’s nest.

(If you like old electronics, check out my story about the oldest operating solar panel in New Hampshire.)

Electric vehicles are all the rage these days but as far as former NHTI professor Tom Hopper is concerned, we’re a bunch of Johnny-come-latelys. He remembers them being the rage before the first George Bush became president.

Clear back in 1989 students and faculty at Concord’s community college, including Topper, were building cars powered by their own solar panels as NHTI became an inaugural member of the American Tour de Sol, a race of solar-powered cars.

Over the next decade or so people at NHTI racked up Tour de Sol wins and solar-car records, including a race to the top of Mt. Washington, built a pre-Prius hybrid car, obtained an electric pickup truck, and installed some of the earliest – perhaps the earliest – public car-charging stations in New Hampshire.

Today as New Hampshire is deciding how to spend $4.6 million from the VW ‘diesel-gate’ settlement earmarked for boosting electric vehicles, the NHTI chargers are still on the job: three sets of sockets plus a slightly more recent charger alongside the east parking lot at Little Hall. By the standards of Tesla Superchargers, they aren’t much, but they sure get a prize for longevity.

Maybe no prize for recent usage, however.

On Friday, Sept. 21, when Hooper was showing me the setup, he opened one of the sockets and found an empty wasp’s nest. When he opened the next one he found another nest, but this one was loaded with wasps.

“Next time, maybe bring a spray bottle,” Hooper laughed after we both leaped backward.

NHTI’s push into electric cars was a classic case of being too early for the technology. Back then such vehicles were experimental at best, and only constant effort could keep the momentum alive. The effort has flagged over the years, as the wasps indicate.

Things are different now, with major car companies falling over each other to make EVs and the state looking to boost a public charging system, and Hooper hopes NHTI can benefit.

Hooper retired 15 years ago, and for 15 years before that he taught architecture at NHTI, where he and a host of electric engineering and mechanical engineering students and faculty built electric vehicles and helped the school install two sets of solar panels. The panels, totaling just 4 kilowatts, are still operating, one fixed on a rooftop and one that can follow the sun on a dual-axis solar tracking system.

“They’re fully functional but the panels are getting old. We’re looking to replace those and to upgrade the system,” said math professor KhaterehSawal.

The solar systems were “basically designed by Tom Hopper with Steve Ryan, another professor here” to a research component: The two otherwise identical systems allowed energy production comparisons between fixed and movable panels, to see if the cost and complexity of solar tracking was worth it.

Over the years maintenance issues took their toll. Several years ago Sawal and another professor, Harold Hart, got grant money to repair the tracker, which had stopped working.

“We had a student, Andrew Allard, in his senior project for electrical engineering technology wrote the program for the tracker and fixed the wiring himself, and now it works. Without him it wouldn’t have happened,” she said.

That’s a good example of the educational value that projects like this bring to NHTI, she said.

“I think it’s most valuable when the students can be involved, designing it, seeing it built. There’s nothing like having a real project, so you can analyze the data, look at the program behind the system,” Sawal said.

As for Hooper, he hopes the new focus on electric vehicles spurred by the Volkswagen settlement may rekindle NHTI’s power passion, both for the sake of the school and for the rest of us.

“If we’re going to survive we have to become all electric, have to stop burning fossil fuels,” he said.

He has one idea for what could be the school’s next big step: Putting rows of solar panels as canopies over the school’s big parking lot. He calculates it could provide $400,000 worth of electricity a year, he said, aside from providing a bit of shade for cars in summer.

A more realistic goal would be for NHTI to extend the solar panel Hooper helped put on Little Hall’s roof decades ago. The long, thin building is perfectly aligned for a bank of panels that would go a long way toward balancing its electricity use. The school is in a transition with a temporary president in place while a search committee finds a full-time replacement to Susan Dutton, who stepped down after four years, so it may be hard for big projects to go forward. But you never know.

“Right now, we need to plan for the future,” said Hooper.