Should we save this gorgeous ash tree? It’s not an easy decision 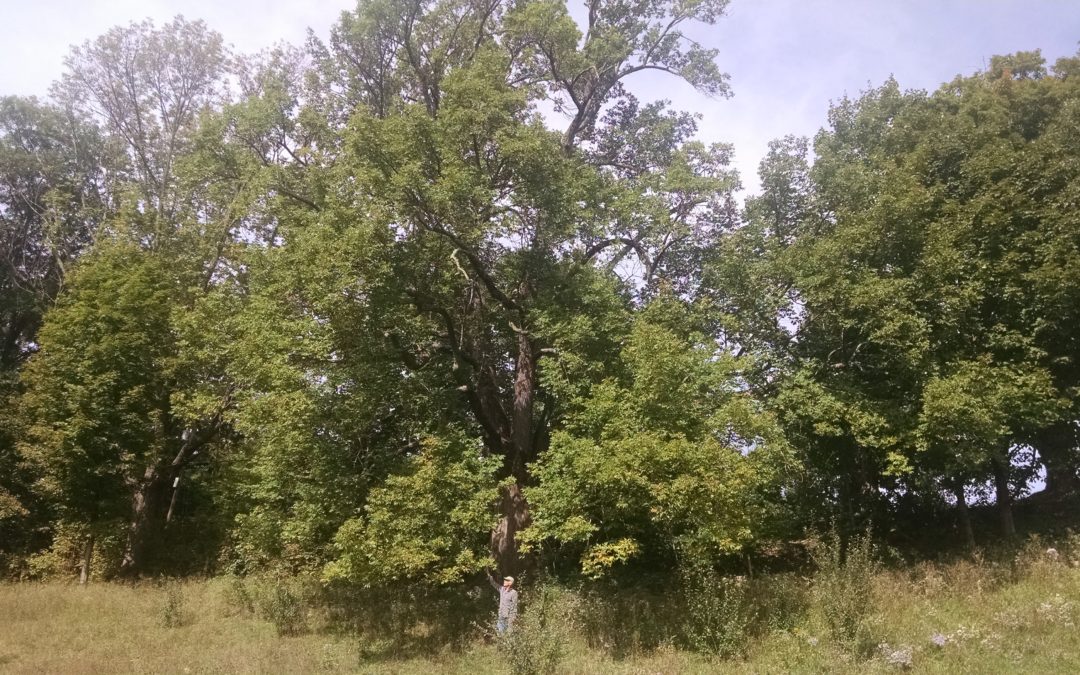 Beautiful, isn't it? Doomed, too. (That's me at the bottom - you have to look hard.)

This is the story of a massive, gorgeous tree that will die before long, the fact that we could save it but probably won’t, and the way that thousands of people, perhaps including you, are facing this same choice.

“It’s a hard decision,” is how Ethan Belair, the UNH Extension forester for Hillsborough County, put it. He’s right.

The tree in question is a white ash in the town of Lyndeborough on property recently purchased by the Piscataquog Land Conservancy. I encountered it last month while helping the PLC plant riparian buffer – biology-speak for trees and shrubs to protect a nearby brook – and I was enchanted.

The trunk is about 8 feet across at chest height. The crown looks to rise a good 100 feet and the spread of the massive limbs is hard for me to estimate: one branch, maybe 20 feet off the ground, extends so far over the field that you could hang a half-dozen tire swings off it. If it was a black ash rather than white ash it might be the biggest of its species in the state, judging from the UNH Champion Tree database.

Beautiful, yes, but doomed by the emerald ash borer beetle, unless we act soon.

The EAB, as it’s known, is spreading fast and while it doesn’t seem to have hit this tree yet, it certainly will. It’s going to kill virtually all of New Hampshire’s ash trees within a few years, as it has already done in parts of the Midwest where it first showed up. Many people believe this tree species is pretty much doomed in North America.

But individual trees can be saved. It requires regular injections of insecticide that kill the beetles as they burrow under the bark. I suggested to the PLC that they might want to take that route and save this tree. It would cost perhaps $500 every other year.

A no-brainer? Not necessarily.

Belair examined the tree at the PLC’s request and was, like me, impressed. Unlike me, he was observant.

For one thing, he noted that the sheer size of the tree indicates that it’s quite old, although it would take core samples to get an accurate number. For another, he saw some dead branches in the canopy and some “epicormic branches,” which grow from a certain type of bud along the trunk; both of those factors are signs of stress.

Finally, Belair noted that the tree is directly against a small country road. This not only constraints the roots but since the tree is on land that slopes down quickly the road covers several feet of the trunk on one side, adding to the stress.

All of which means, he said, that despite its glorious appearance this tree might not be the best investment in the EAB battle because factors other than the ash borer could take it down.

“I’d love for all the big old trees like these to be saved. Still, the rational part of me sees efficiency in saving other, smaller, more vigorous trees, maybe in easier-to-work conditions, as a potential improvement for the overall conservation of ash,” he wrote as part of an email exchange about the issue.

Jordan Bailey, stewardship coordinator for the Piscataquog Land Conservancy – which owns or controls more than 7,000 acres from Henniker down to the Massachusetts line – said the group’s stewardship committee would be discussing this tree at a later meeting, as well as the bigger question of what to do about ash trees in general.

“We’ll be looking at it as part of a forestry management plan … building a consensus, looking at funds. It’s a new game for us; we haven’t done anything like in the past,” she said.

The arrival of an apocalyptical threat like EAB does raise questions about how to respond.

Do you save the pretty ash trees? The prominent trees? Lots of small young trees because they’re cheaper to deal with? No trees at all, putting your time and money into species with more of a future?

Or maybe you should throw in your hand and cut them all down now to sell them while the lumber still has some value.

UNH is taking the long view. Belair said it is looking for trees that are young but not too young, healthy and in good locations around the state. The idea is to inoculate them and keep them growing as 99 percent of the continent’s ash trees die.

At that point, the hope is the emerald ash borer will also die from lack of food. And while some beetles will probably survive, two species of wasp that prey on emerald ash borer – biocontrols that aren’t currently making much of a dent – might be able to keep the beetle’s small remaining population in check, allowing ash trees to repopulate our forests.

My giant tree in Lyndeborough won’t help that effort; it’s just too old. If it gets saved, it will be saved for aesthetic reasons only. Sort of like me, perhaps.

Belair, by the way, was more upbeat than me about the fate of America’s ash trees. He pointed to the American chestnut and American elm which were virtually wiped out by disease last century but still exist in tiny numbers and are the subject of concentrated efforts to breed resistant varieties.

“I’m the doom-and-gloom guy when I show up, but there is precedent that tree species can somewhat recover over time. Even with emerald ash borer we have some expectation that there’s going to be a few ash trees that somehow escape and live long enough to produce seed. … There’s still going to be a few here and there, and that’s where the science comes in,” he said.

And even if the ash can’t be saved, he said, our woods will persevere.

A century ago, the chestnut was estimated to make up an incredible 20 percent of America’s eastern woodlands.

“Now those trees are gone but we still have forests. We have more forests than we did in 1900,” he said.