Updating the shallow ‘dug’ well for the modern world 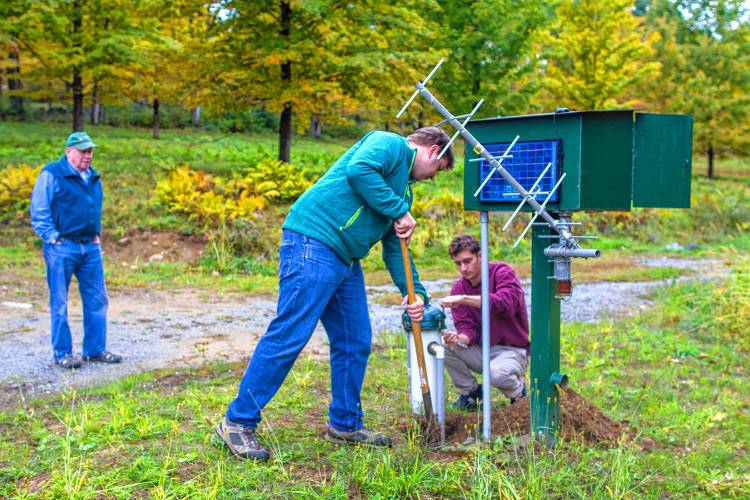 Few things say “old-time New England” more than getting your water from a dug well, a 20-foot hole in the ground covered with a concrete top that pipes water into your house.

But what if there was a whole type of dug well, one so new that its design has been patented? Would that be old-timey or newfangled, or maybe both at once?

Ayotte is a United States Geological Survey hydrologist who developed the new method in hopes of solving two problems: The way dug wells are prone to contamination, which is why they have practically disappeared from New Hampshire, and the way our geology makes drilled wells which draw water from deep in the bedrock prone to high levels of natural arsenic.

It is being tested at two sites in Concord and Loudon.

“I’m very satisfied. The water tastes good and there’s plenty of it,” said Dean Wilbur, a neighbor of Ayotte who installed one of the new designs to replace a problem well near his sugarhouse at Maple Tree Farms in Concord.

We’ll get into details of the design in a minute but first, what about that patent (US9689235B1)? Why would a research hydrologist who wants to spread the word about his new system hide it within a patent?

Because it’s not hidden, says Ayotte. A lot of people scroll through patents looking for projects and ideas.

“Scientific papers are our bread and butter … but a patent gets it out there to a whole different audience,” he said. “This is reaching a community that is interested in economically viable endeavors. People who might be interested in a viable technology. If a patent is licensed, it’s specced, it’s testable and usable.”

The patent, by the way, is held by USGS, not Ayotte personally. That should make licensing easier and cheaper, if anybody wants to commercialize it. 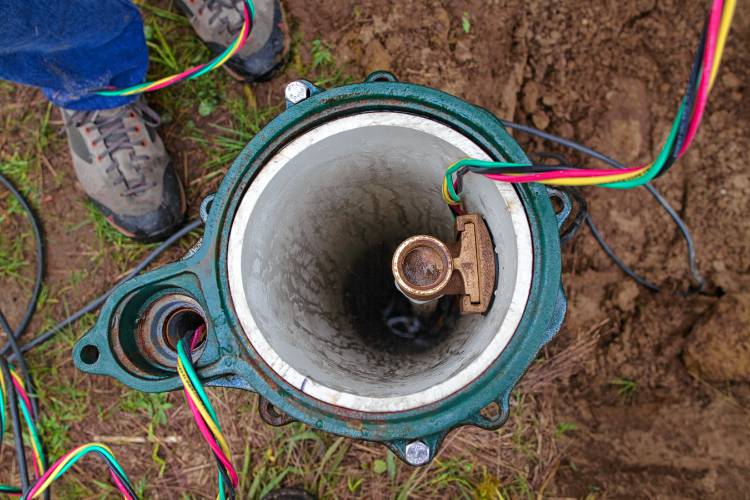 So, what would they commercialize?

A traditional well is dug down 15 or 20 feet, below the topsoil into what geologists call the glacial till. It’s usually about 3 feet across, lined with stone or concrete, and covered with a concrete cap of some sort. Water that is oozing through the glacial till oozes into the emptiness of the well, where it is stored until used.

I have a dug well on my property. We used it one summer until it ran dry, after which we installed a drilled well that goes down a couple thousand 560 feet into bedrock. It has a three-foot-high concrete wellhead with a big heavy concrete cover on top. I can push the cover aside with effort and peer down to check the water level or to see if snakes are hiding among the fieldstone rocks that line it, trying to avoid the summer heat.

Therein lies one problem with traditional dug wells, said Ayotte: They don’t keep out contamination carried in by animals, or contamination that seeps in from the surface or through the often-cracked well liners, such as fertilizer, pesticides, e.coli from animal waste, etc.

The other problem? Water generally seeps in only through the bottom of the well, a relatively small surface area. This geometry limits how much water they can hold and how fast they can recharge, as I found out during that dry summer.

Ayotte’s design is much bigger. Instead of a narrow circular hole, it is a large cube, at least 15-by-15-feet in cross section, or even bigger. It looks more like a root cellar than a well.

This means that it has perhaps 10 times as much surface area, which should produce a much higher storage volume and recharge rate. Wilbur, at Maple Tree farms, says he experimented, running his pump at 160 gallons a minute for almost an hour, indicating the storage of more than 8,000 gallons.

Ayotte installs the piping and water pump, fills the hole halfway up with crushed stone, which lets in the water, puts down a geotextile fabric, covers that with fine-grained dirt that prevents what he calls “downward migration of contamination.” He tops it off with a sanitary cap, similar to those used on drilled wells.

“Instead of a wobbly concrete cap, you’ve got a very tight-packed cap to keep everything out,” Ayotte said.

Ayotte’s not the only person who has been trying to update this 5,000-year-old design, and the USGS isn’t the only organization working on it. The New Hampshire office is collaborating with the state Department of Environmental Services, the EPA and the University of New Hampshire to get samples analyzed.

One question is why they bother.

Dug wells aren’t a big part of New Hampshire any more. The Department of Environmental Services says only about 7,000 of the state’s 132,000 private wells are shallow dug wells, or about 5 percent. The rest are drilled wells.

If dug wells are rare, and getting rarer, why does Ayotte want to upgrade the design? In a word: arsenic.

Due to geochemistry, high levels of natural arsenic is present in water from bedrock in many parts of the state, particularly the Southeast Corner. Most of our bedrock wells are slightly alkaline and the dissolved oxygen concentrations tend to be relatively low, two conditions that Ayotte said can “mobilize” arsenic so that it moves out of bedrock into water.

This arsenic has been linked to health problems, notably bladder cancer, which is prevalent in New England. Treatment systems can alleviate or lessen the risk, but they’re expensive and have to be maintained, and homeowners sometimes don’t use them properly. It would be better, Ayotte said, if wells didn’t produce arsenic in the first place.

Shallow wells in most of New Hampshire have different geochemistry – they’re slightly acidic with higher dissolved oxygen – so the arsenic stays put. Giving people a better dug-well option could have health benefits down the road.

And there’s one other plus. The increase in “extreme weather events” from changing climate is having the effect of depositing more water into the glacial till aquifer. Dug wells tap into this supply, which might be growing as our needs grow.

As for cost, it’s early yet but Ayotte says the test wells should be equivalent to or cheaper than drilled wells, although more expensive than a standard dug well.

Ayotte said he knows his idea isn’t perfect, because dug wells are dependent upon the geology of shallow areas. “This will not work everywhere, but it works in many, many places,” he said.

“We have not been thinking very much about the viability of the shallow aquifer … but I think it’s something we should be looking at again,” he added.

And if you’re wondering: Yes, he installed one for himself after his drilled well got contaminated with high iron levels.