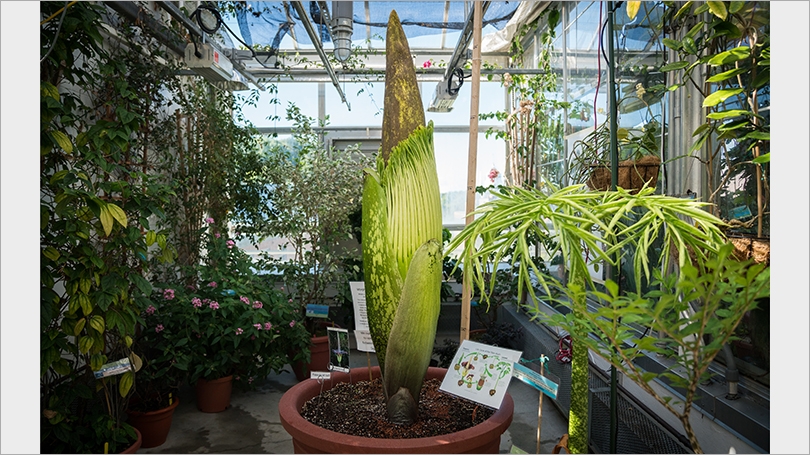 My photo of Morphy from two years ago.

From Dartmouth News Service: At Dartmouth a rare corpse flower (Amorphophallus titanum or titan arum) named Morphy is getting ready to bloom at the Life Sciences Greenhouse on campus. Once in bloom, the enormous plant will have a pungent odor that has been compared to the smell of a dead rat or dirty baby diapers. Morphy is expected to bloom sometime next week and will only be open for about three days.

A corpse flower typically blooms only about once every seven or eight years; however, 15-year old Morphy just bloomed two years ago in September 2016, topping out at an impressive height of 7’6”. The super-sized, stinky plant drew a crowd of more than 5,000 visitors. (Include me and my wife – David)

Here’s the link to a time lapse of Morphy blooming in 2016: https://www.youtube.com/watch?v=wWscTuz8puM.

The corpse flower has the largest unbranched inflorescence in the world and appears as a single bloom exhibiting striking color, bright lime green on the outside with a dark burgundy on the inside. Its ruffled collar called a spathe encircles the thick, central stalk that resembles a gigantic, French baguette or for some, a phallus. The spathe is not, technically, the flower. Tiny, yellow flowers will be hidden inside towards the base of the plant. As in 2016, visitors will get a good view of the little flowers through a square window cut in the plant. The plant is native to the rainforests of western Sumatra, Indonesia. The Life Sciences Greenhouse at Dartmouth may be the only place in northern New England to see a corpse flower.

Once Morphy opens, its strong odor will be strong for a day and then dissipate. When a corpse flower blooms in the wild, its putrid smell attracts carrion beetles and flesh flies that serve as natural pollinators. The inflorescence will die several days after it blooms. The plant is currently five feet tall and growing about three inches a day. It may grow a few more feet before it opens next week.

Here’s the link to the live webcam of Morphy: https://dartmouth-greenhouse-h-264.click2stream.com/.

“When Morphy bloomed in 2016, I was surprised by how much the odor shifted. At first, it smelled like a dead rat in your wall and then towards morning, it smelled more like dirty baby diapers. Given that the male flowers become fertile first, my guess is that the smell shifts as the female flowers become fertile, all of which may help attract different pollinators,” says Kim DeLong, manager of the Life Sciences Greenhouse at Dartmouth.

Morphy was grown from seed in 2003 by a private grower in New Hampshire and was acquired by Dartmouth in 2007. Each year, a corpse flower sends up either a leaf or a flower; each leaf lives for almost a year, whereas, a flower lives less than a week. Morphy has bloomed on two other occasions: in July 2011 and September 2016. It only had one leaf in between the two blooms, which stayed open for about 13 months and reached a height of 10 feet, nearly touching the greenhouse ceiling. During that time, the leaf was busy photosynthesizing and storing energy, as the plant must store energy to send up a flower. Once the leaf died in June, the Greenhouse repotted Morphy’s corm or swollen underground tuber, which had an estimated weight of 80 to 90 pounds and took three people to lift. More information about the life cycle of the titan arum<http://my.chicagobotanic.org/life-cycle-of-the-titan-arum/> can be found in a diagram by the Chicago Botanic Garden.

The Life Sciences Greenhouse at Dartmouth, which opened in 2011, is home to an extensive and varied plant collection. It includes the Brout Orchid Collection, which houses about a thousand orchids of many species and hybrids in two rooms. There are three other rooms open to the public: a tropical room, a sub-tropical room, and a xeric room housing cacti and succulents. The greenhouse is open to the public year-round and will have extended hours for viewing. The greenhouse is open Monday through Friday from 8:30 a.m. to 4 p.m., yet, visitors are encouraged to visit Morphy after 2 p.m., as parking options may be better later in the day. The extended greenhouse hours will be announced soon once Morphy begins to bloom.