After succeeding in space, N.H. firm wants to bring carbon nanotubes down to Earth 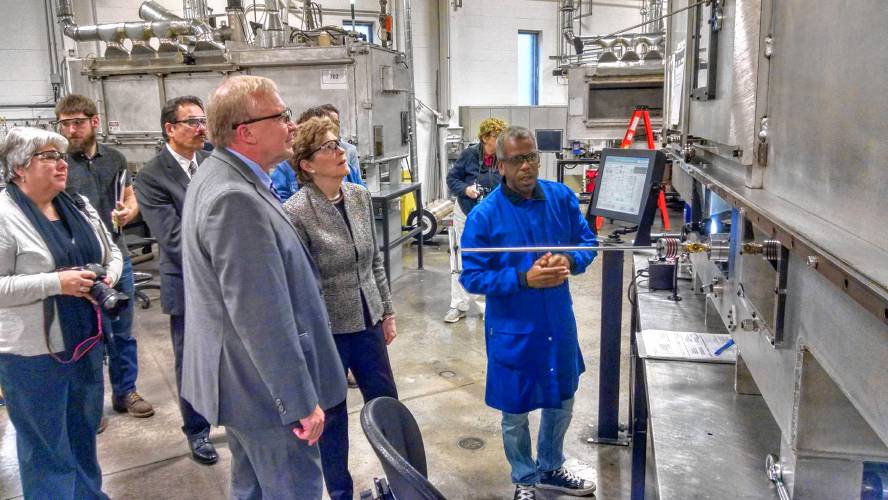 After a company has seen its flagship product launched to Jupiter, been purchased by a multi-billion-dollar conglomerate with plenty of plans for expansion, and had NASA double down on its main contract, choosing the next step might seem a bit complicated.

Here’s an idea: Protect maple syrup in the woods.

“That’s a real product,” said John Gargasz, managing director at Nanocomp, a firm that operated near the Concord airport for eight years before moving to Merrimack in 2012.

He was speaking during a press tour Monday announcing the expanded NASA contract at which a host of dignitaries, including Sen. Jeanne Shaheen and NASA officials, got a look at how the company takes carbon nanotubes – microscopic structures built of carbon atoms – and turns them into yarn and fabric with strange capabilities.

One of those capabilities is turning electric current into heat with a supple, lightweight and very strong fabric called Miralon. Nanocomp has used Miralon to heat satellites in the cold of space as well as protect them from radiation and micrometeorites, and it’s rolling out a line of more down-to-earth applications, such as chairs that can warm people while they are relaxing on a cold patio or working in a cold office.

Which brings us to the maple syrup. Commercial maple operations connect many scores of trees to tank that sit in the woods, gathering hundreds of gallons of sap that is collected by truck or ATV. Keeping those tanks from freezing during extreme cold snaps is a problem, one that Gargasz says a few strips of battery-powered Miralon could help solve.

And even though saving syrup is never going to be a major commercial market, it’s a sign that after years of research and development coupled with success in high-profile but tiny markets like orbiting satellites and spacecraft going to Jupiter, the 50-employee firm thinks it is ready to move to bigger sales.

Their purchase in March by Huntsman Corp., a $10 billion chemical and materials firm based in Texas, is the catalyst.

“We have been wanting to expand into carbon-based materials, but have never managed to do it successfully,” said Scott Wright, president of Advanced Materials at Huntsman, at Monday’s event.

Wright said that Huntsman planned to invest a lot of “capex” – business-speak for capital expenditure, meaning money – into Nanocomp “rather than more established technologies” because of the promise of nanotube-based yarn and fabric.

“We will keep the operations in New Hampshire,” he added.

Despite recent expansion, Nanocomp still has room to grow in its former Nashua Corp. paper products factory on Route 3 in Merrimack. The firm moved there after several years in Concord, largely to be closer to prospective employees in the Boston market.

Nanocomp was founded in 2004 by a trio of researchers in Lebanon, who figured out a better way to get carbon atoms to join together and form tubes a billionth of a meter in length, in what is known as the nanometer scale, and then convincing these tubes to line up in ways that let them transfer mechanical or electrical energy in useful form.

The process involves spinning a fog of carbon nanotubes to create yarn – a process often compared to making cotton candy – with the use of massive furnaces and a lot of high-pressure and high-temperature chemistry. The yarn has enormous strength for its weight as well as being able to conduct electricity, block electromagnetic interference and resist thermal expansion, traits that can be useful for everything from protecting warriors in combat to building a lighter and stronger airplane floor.

A main obstacle to any commercial application has been cost. Cutting cost partly requires a major increase in production.

Monday’s announcement of an $8 million contract from NASA over the next 15 months, and perhaps longer, should help. Nanocomp will be building more, and much larger, furnaces as part of meeting the space agency’s requirements.

“We’ve been saying for years now that we’re 5 or 10 years away from strong applications in nanomaterials,” said Jim Reuter, acting associate administrator for NASA’s space technology section. “This is a big push … to make it happen.”

Among the demonstrated products Monday were test units for NASA sounding rockets that wove Miralon into hardened containers much lighter than those made of metal. There is potential for composite materials made of carbon nanotubes to reduce the weight of rockets by as much as one-third, Gargasz said.

As for earth-bound applications, those will be coming, too.

“You’ll see stickers, like ‘Intel inside’,” Gargasz speculated. “Miralon Inside!”