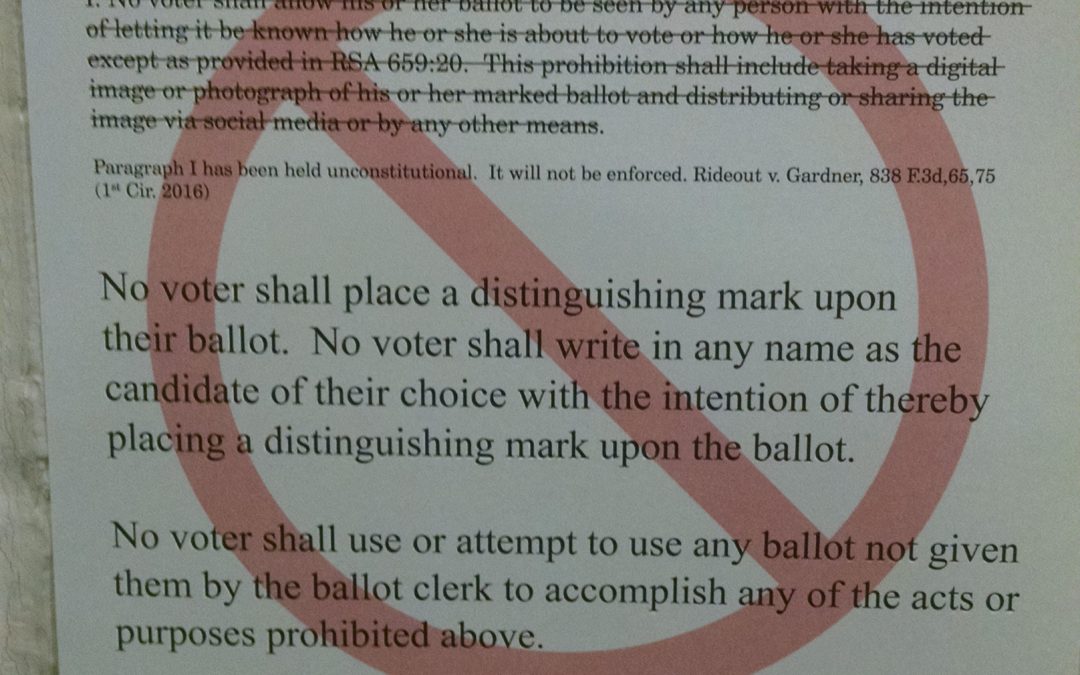 This poster was on the wall of every NH polling place.

New Hampshire election officials’ opposition to people being allowed to make “ballot selfies” – taking photos of their completed ballot and posting them online –  is rooted in a long-standing desire to keep our voting habits secret. Here’s how I described it in 2016:

Like many states, New Hampshire has long had a law on its books designed to prevent people from proving how they voted.

The law, which dated back many decades, forbade voters from showing their completed ballot to another person “with the intention of letting it be known how he is about to vote,” and from placing a “distinguishing mark” on the ballot so it could be identified after the election is over. That last statement was construed to include photographs, which is why ballot officials didn’t allow cameras in polling booths.

Such laws were born out of vote-buying habits in the 19th century, when it wasn’t uncommon for campaigns to offer money or liquor at a polling place. You showed them your marked ballot and got your payoff.

Preventing voters from showing a completed ballot, or from marking it in a way that could identify it later, was designed to prevent both vote buying and vote coercion. Your boss might threaten to fire you if you didn’t support the company candidate, but since there was no way anybody could be certain what you actually did inside the voting booth, that was a toothless threat.

This law drew little attention until smart phones and Instagram came along. The Legislature updated the law to forbid ballot selfies, but it was overturned by a court two years ago, and now we can “share” our votes online to our social-media-heart’s content.

But as I realized when voting Tuesday, the pre-ballot-selfie aspects of the law still hold sway. They are even listed in a poster on the wall of every polling place, as shown in the photo above.

In other words, you can photograph your ballot and show everybody how you voted, but you can’t make a little mark in the corner of the ballot so you can identify it later and use it to show people how you voted.