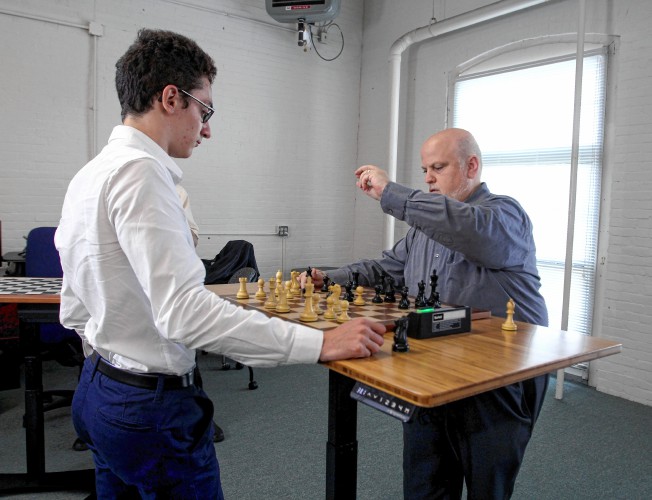 2016 photo: Michael Kind (right) CEO of Right Height Manufacturing, ponders a move in a speed-chess game against U.S. Chess Champion Fabiano Caruana at the company’s offices in the Manchester Millyard. They are playing on an adjustable-height Prodigy Desk.

Fabiano Caruana, who is tied with world chess champion Magnus Carlsen in an attempt to be the first U.S. resident since Bobby Fischer to be No. 1 in the world, has a very slight New Hampshire connection: He gave his name to an adjustable-height chess desk that was being developed by a Manchester firm in 2016.

I’m not sure that the desk was ever produced or is still being produced. There’s no mention of it on the company website and all of Caruana’s online mentions are a couple years old. I’m trying to find out, but for the time being, here’s the story I wrote in 2016:

There are markets and there are niche markets, and then there’s the market being pursued by Right Height, a New Hampshire firm developing an adjustable-height table aimed just at chess players.

“This is a very specialized market,” agreed Michael Kind, founder of Right Height, which has developed and sold ergonomic office equipment since 1991 in the Manchester Millyard. “But we think this will help expand the market (of chess players), raise awareness, makes it more mainstream.”

Kind would like to see more people playing chess because he loves the game, which he is really good at. Kind has a U.S. chess rating of around 2,000, which makes him among the two dozen best players in the state, according to the New Hampshire Chess Association.

But there’s a better player – a much better player – involved in developing and selling the Prodigy Desk. That is U.S. chess champion Fabiano Caruana, who has been rated as high as No. 2 in the world, a 24-year-old former prodigy who will be leading our country’s team at the international Chess Olympiad in Azerbaijan next month.

“This is a personal thing for me,” said Caruana during a visit to Manchester on Thursday, where he talked to several reporters and posed for photos with prototypes.

Like all grandmasters, Caruana spends hours a day studying chess on computers or at the board, and like all deskbound workers, he finds that sitting too long can pose problems. An easily adjustable desk with width and depth suitable for chess is just what he wanted.

But as a former prodigy – he played in his first tournament at age 5 and became a grandmaster before turning 15 – Caruana also knows that having a desk properly sized for children is helpful. The Prodigy Desk can go as low as 22 inches, suitable even for a kindergartener, and as high as 51 inches to handle anybody this side of Matt Bonner.

Its electric motor works carrying as much as 120 pounds, which would be one heck of a chessboard, and it includes four settings to remember different heights. As might be expected, an attached chess board will also be an option.

The desk’s attraction for children who are interested in chess is likely to be a big part of its selling point. Kind noted the role that chess often plays in schools as an aspect of science and math education, and as a way to teach children how to focus.

Kind said the eventual price will be “under $500,” with a variety of woods available and two models, one with a rectangular top and one designed to sit into the corner of a room.

A Kickstarter program is being put together, said Jonathan Brownfield of Lift Digital Media, part of the Prodigy Desk team.

Kind says he pitched the idea of the Prodigy Desk to Caruana at an open chess tournament. Such tournaments seat players according to their strength of play, which meant “I was at one end of the room and Fabiano was way over at the other end,” but he bridged the gap and made an introduction.

As a specialty product, Prodigy Desk fits the mold for Right Height, which has developed a number of items over the years for offices, from laptop holders to monitor arms to adjustable desks. A big early customer was Dartmouth-Hitchcock, Kind said.

The company has about 10 full-time employees in the former mill building at 150 Dow St., and does manufacturing at a number of locations, including Phytek Industries in Bow.