Loons are big-boned, which is a problem when lakes freeze up 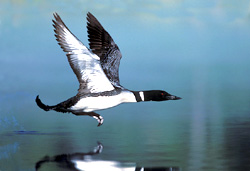 This is harder than it looks, apparently.

I’ve seen loons a few times while kayaking around New Hampshire, but I’ve never seen one take off. I have, however, seen ducks take off from the water – and it’s a long, laborious process, whereas a robin can take leap right off the ground and start flying.

I never thought about why those two processes were so different until an announcement yesterday from the Loon Preservation Committee asking people to keep an eye out for loons trapped by the early icing-up of New Hampshire ponds and lakes.

Trapped in the ice? I thought. Not exactly, said Harry Vogel, senior biologist and executive director of the Loon Preservation Committee.

The early icing over creates the risk of them getting stuck because there’s not enough open water for them to take off and migrate south.

The difficulty is that loons are relatively heavy as birds go, which means they require a very long runway, to to speak.

“On a dead calm day it can take a quarter of a mile of open water for them to get airborne,” said Vogel.

Vogel said loons (like ducks) are heavy because they are built for life in the water more than life in the air. If they had light, hollow bones like songbirds, they would be so buoyant that it would be harder for them to dive and catch prey.

“Their bones are not solid, but they are much more dense of virtually any other flying bird. … This help loons achieve neutral density in water,” said Vogel.

Loons can’t gain enough speed to take off by running across solid ice but only by paddling across water. If they’re on a lake that is largely frozen over, they may be trapped because they can’t get into the air.

“They are easy prey for eagles” if that happens, Vogel said, and they also risk succumbing to the weather if they can’t get to their wintering grounds.

Most loons have already migrated south but it’s not uncommon for some, especially this year’s chicks, to remain into December. The committee said it rescued its first iced-in loon this year Saturday, trapped on Willand Pond in Dover.

The Loon Preservation Committee is asking people to keep an eye out for loons still swimming on small patches of open water in frozen lakes. Call the group at 476-LOON (476-5666) for more information.

Loons are a threatened species in New Hampshire and are protected by federal law.