Stone walls can be found via LIDAR from above, crowd-sourcing from below 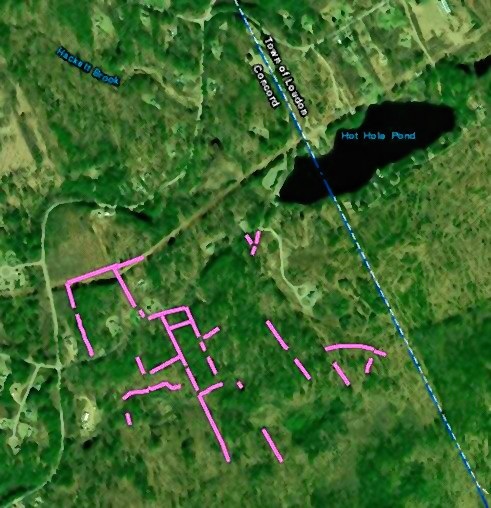 This Jan. 14, 2019, screen shot shows stone walls that have been mapped in east Concord as part of the Stone Wall Mapper project

A combination of the aerial mapping using a system called LIDAR plus Internet-based crowd-sourcing may finally answer one of the most fascinating, if not very pressing, questions about the New Hampshire countryside: How many miles of stone walls do we have?

“We want to get people to know something about LIDAR, to start looking at their surroundings, and it became obvious that stone walls were the hook,” said Rick Chormann, the state geologist and driving force behind the New Hampshire Stone Wall Project. “People have this romance about stone walls. I’m one of them, I am clearly a victim of that. For whatever reason they have an appeal.”

The project, which moved out of beta into public view on Tuesday, is pretty straightforward.

The state has uploaded a zoomable image of most of New Hampshire taken by airplanes using LIDAR, which operates like sonar but uses light waves and produces a more detailed image. Even when imaged from a mile high in an airplane going 180 mph, LIDAR can show items just a couple of feet across.

Members of the public can search through the black-and-white image and if they find what appears to be a stone wall, notable for unnatural straightness amid meandering hills or streams, they can mark it with a drawing tool that creates a thin pink line. These lines will create a map and database of the state’s stone walls. The online map include a “progress to date” link keeping a running tally of how many miles of walls have been marked.

Anyone can participate; there’s no need to sign up or to get any training. As with many crowd-sourcing projects, such openness raises questions about accuracy.

“Obviously, having the public do this, you’re going to get a lot of probably false positives,” said Chormann, meaning that some walls will be marked even though they are actually something else, such as an old road or a straight earthen berm.

One the project gets established, he said, the next step will involving creating some sort of curation or stewardship process in which people hike to the site and double-check a listing – known in the industry as ground truth or field verification.

That, however, will be an enormous job. The usual estimate for length of all the stone walls in New England is 250,000 miles, slightly more than the distance to the moon, but nobody really knows. New Hampshire is certain to contain many tens of thousands of miles of such walls; checking them all on foot for an online map may never get accomplished.

“Around Lyme there’s a fellow who has done hundreds of walls. Just to field-verify what he has done would take quite a bit of time,” said David Justice, a GIS analyst for the Earth Systems Research Center at UNH. The Stone Wall  Project is an good example of GIS, or geographic information system, a term for capturing real-world physical data in digital form. Hand-held GPS systems in smartphones are an example of a GIS product.

Chormann, the state geologist, has long been interested in aerial LIDAR because it can show geological formations not easily seen by standard photography, casting light on questions such as how the glaciers moved through New England.

He says he became aware of LIDAR’s archeological applications after hearing a presentation from Katherine Johnson, a Ph.D. candidate at the University of Connecticut.

“I had been focused on the large landforms and not paying a whole lot of attention tot he cultural features that were there, but she opened my eyes,” Chormann said. “There are some pretty neat things that you can discern once you know what you’re looking for, like charcoal hearths.”

For Chormann, however, the biggest benefit of the Stone Wall Project is that it will show off the LIDAR mapping system to the public, creating what he hopes will be a lure for them to appreciate and enjoy the state’s geology.

“If you get people to know something about LIDAR, they’ll start looking at their surroundings, start to see the landscape a little bit differently,” he said.

Aerial LIDAR mapping of New Hampshire began after the 2008 recession with money from the federal stimulus funding that creating mapping of the coastal areas of all New England states, including New Hampshire’s Seacoast. Since then it has been expanded inland, using about half a million dollars in state funding matched by federal funds.

The only part of New Hampshire not on shown on the NH Stone Wall Project at the moment is the Umbagog region on the state border. Getting the North Country mapped is difficult because it is best done after leaves have fallen from trees but before snow has fallen. That can be a short window of time up north.

Chormann said the Umbagog region has been LIDAR mapped but the government shutdown has prevented the images from being included on the Stone Wall Project site at this time.