Giving up on new gas pipelines & hoping for carbon pricing 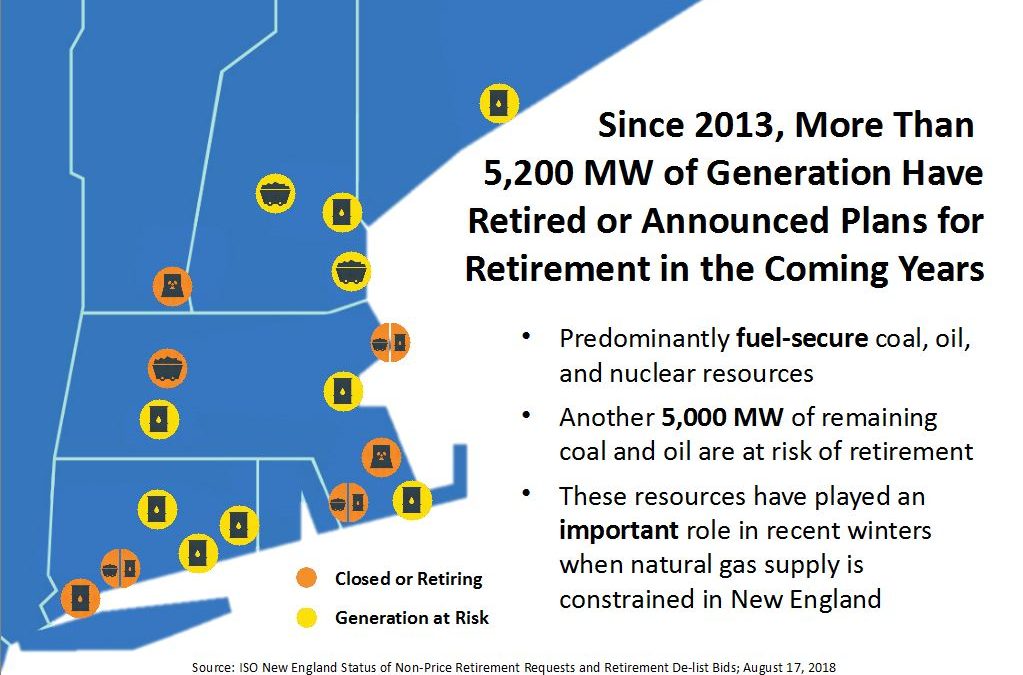 A scary slide from the presentation (scary if you're a power grid operator, anyway)

(Don’t trust my reporting? You can look at the whole presentation on the ISO-New England web page here.)

There’s an “elegant and simpler” way for New England’s power grid to deal with concerns about running out of fuel during a cold snap while meeting climate-change goals, but don’t expect to see it any time soon.

And no, it’s not building more gas pipelines.

That was part of the message delivered Wednesday by Gordon van Welie, president of ISO-New England, the organization that runs the six-state electricity grid, during an annual review of the state of the grid.

The method van Welie touted is carbon pricing, or putting a cost on each ton of carbon emitted into the atmosphere by a power plant producing electricity. Done right, he said, it would provide market signals for power plants and give them incentives to line up enough low-carbon power production to get us through emergencies.

“I’ve been a bit of a broken record about this over the years. I’ve had multiple conversations with pretty much any legislator who will give me time,” van Welie said in response to media questions after the briefing. “In the long run, it’s the right answer for the region.”

Van Welie admitted that there are two major problems with carbon pricing, which is one reason why it has not been implemented anywhere in the U.S.

One is social: Carbon pricing is regressive, hurting the finances of low-income people the most. The other is jurisdictional.

“States want to control the pace at which they decarbonize, and not turn it over to the ISO or to federal regulators,” he said. A carbon price needs to be regional, or even national, to really work.

Van Welie pointed to the Regional Greenhouse Gas Initiative, a nine-state program to put a cost to carbon emissions from power plants, as a cautionary example. While it has operated successfully and generated millions of dollars for efficiency and rate-reduction projects, the price of carbon has been so low that it has not materially affected fuel procurement.

Van Welie’s talk echoed a theme that has been central to his public comments for many years: Concern about “fuel security” due to the region’s dependence on natural gas to generate about half our electricity. During long cold snaps, so much gas is used for heating that some power plants curtail production; combined with closures of coal-fired and nuclear power plants, there are concerns about potential shortfalls in electricity production.

Van Welie said his concern about this possibility has only increased over time, but he did not mention a solution that he used to favor: Building pipelines to bring more natural gas into New England.

“We do not think we are going to see any significant new pipeline capacity into the region,” he said, acknowledging that public opposition has blocked all such efforts. “We are facing reality.”

Other details that came up in the talk:

■There are almost 160,000 small solar arrays in New England on rooftops and in yards. Overall, these produce more than twice as much electricity as Seabrook Station power plant, but they are “behind the meter” and thus invisible to ISO-NE’s planning. The grid sees them as a reduction in energy usage.

■Wind farms, particularly offshore wind farms, make up the bulk of power plants that want permission to hook into the power grid in the future via the interconnection request queue. However, van Welie cautioned that in the past a majority of proposals in the queue have fallen by the wayside before actually getting built.