Are voles the secret weapon against invasive buckthorn shrub? 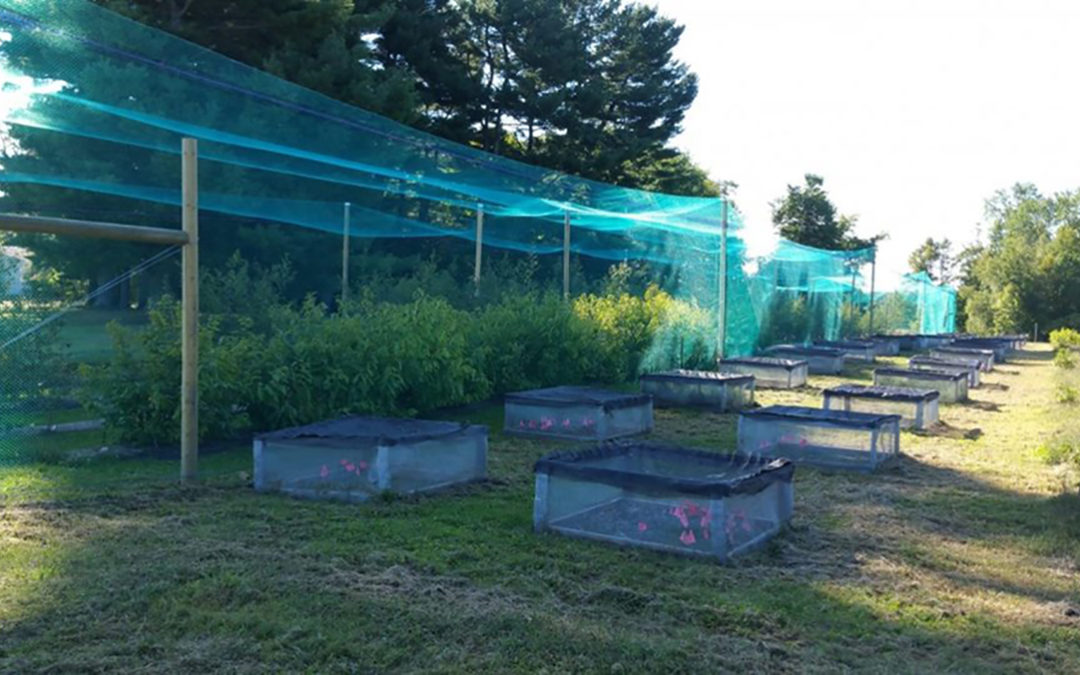 UNH photo: Planting grass turf in tilled agricultural soil greatly reduced the ability of new growth of the invasive shrub glossy buckthorn to establish itself in a new area by seed.

Planting grass turf in tilled agricultural soil greatly reduced the ability of new growth of the invasive shrub glossy buckthorn to establish itself in a new area by seed, according to researchers with the New Hampshire Agricultural Experiment Station at the University of New Hampshire. The new finding provides a promising tool for loggers, foresters, and landowners trying to manage this non-native invasive shrub known to reduce the regeneration density and growth of economically important tree species such as eastern white pine.

Researchers collected data from an experiment in which buckthorn seeds and seeds of eastern white pine were sown into plots of newly tilled agricultural soils. The agricultural plots were treated in five different ways: planted grass turf, compacted soil, oak leaf litter, pine leaf litter, and no treatment, which was the control group.

“Grass turf and pine litter significantly reduced buckthorn emergence from sown seed, but only grass turf reduced buckthorn survival,” said Tom Lee, associate professor of forest ecology and experiment station scientist. “After two growing seasons, buckthorn was nearly eliminated from grass turf, and none of the few remaining plants in that treatment flowered or produced seed. In all other treatments, buckthorn had nearly 100 percent survival in year two, and at least some plants produced flowers and seeds.”

The researchers theorize that the cause of the glossy buckthorn mortality could be competition from the turf grass but also the presence of meadow voles, which typically colonize grassy areas. “If we’re right about that, then the success of the method may not only depend on the presence of a well-established turf, but also on the establishment of meadow voles,” Lee said.

Lee conducted the research with Steve Eisenhaure, land use coordinator with the UNH Office of Woodlands and Natural Areas.

While this method reduces and virtually eliminates glossy buckthorn that is trying to establish itself in a new area, it will not help with glossy buckthorn that already has invaded an area. “That establishment of new areas of glossy buckthorn from seed cannot only be reduced but almost eliminated with planted grass turf is new information. The past year’s results suggest inhibitory effects greater than suggested in year one. Buckthorn recruitment from seed in log landings, skid roads, or other areas impacted by logging could be strongly inhibited by timely establishment of grass turfs,” Lee said.

Lee and Eisenhaure said further study is needed in regards to forest soil. The results could be different in forest soil, especially if the forest soil is less fertile and generates a turf of lower density. Also, while meadow voles are abundant in agricultural settings and colonize quickly, voles may not colonize right away in a recent patch cut deep in the forest.

Another concern is the “seed rain” of glossy buckthorn. Studies have shown that the effects of competing plants on invasive plants are reduced as the number of arriving seeds of the invasive plant increases. The amount of buckthorn seed in the test plots was limited; the glossy buckthorn may have been more successful with increased seed.

“The forest products industry is important to New Hampshire’s economy, and the eastern white pine is one of our most valuable tree species. Anything, including invasive shrubs, which inhibits eastern white pine growth is of concern to the industry and should thus be a concern to the people of the state,” Lee said. According to the North East State Foresters Association, the annual value of sales of New Hampshire’s forest products industry totals nearly $1.4 billion.

This material is based upon work supported by the NH Agricultural Experiment Station, through joint funding of the National Institute of Food and Agriculture, U.S. Department of Agriculture, under award numbers 0225004 and 1006668, and the state of New Hampshire.