Hey cell phone addicts: You’re allowed to turn them off! 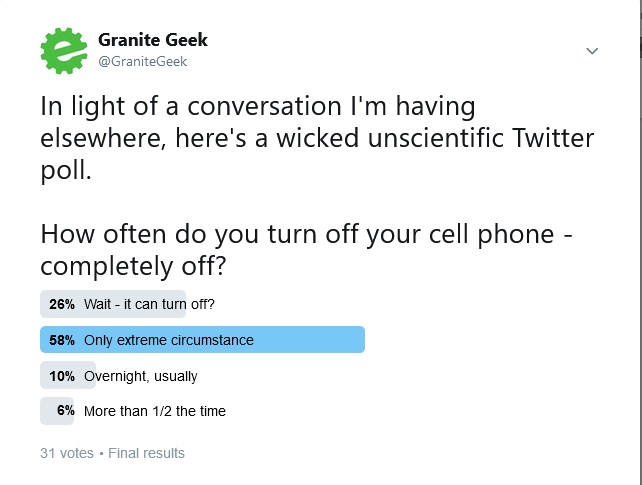 There is, of course, endless discussion both online and in real life about people’s addiction to their smartphones and many solutions being proposed: apps that dampen your usage, social compacts among friends to cut back, boxes with time locks to hold the phone for a while, trained falcons that will snatch the phone from your hands if you pull it out of your pocket, etc.

But nobody ever suggests the easiest solution of all: Turn it off.

Your phone won’t buzz or ring if it’s off and you won’t be tempted to check it during moments of boredom if you have to wait 30-60-90 seconds for it to turn back on. It’s an easy solution, and it also lengthens the time between having to recharge the battery.

I turn mine off a lot – more than half the time. It’s off every night and most weekends, since it’s used almost exclusively for work. But I’m old and my smartphone habits aren’t ingrained. Furthermore I have a landline at home and one at work, so I’m not really cut off when the cellphone is off – cellphone-only people would probably consider that cheating.

It seems to me that the idea of turning off your smartphone is taboo; it disconnects you from modern reality in a way that’s almost shocking. To check that supposition I ran a wildly unscientific little poll on my Twitter account, which has about 1,400 “followers”, whatever that means. I got 31 responses and, as you see from the screenshot above, only 5 said they turned it off regularly.

That’s un-extrapolate-able to the general but it doesn’t seem wildly unexpected. Those things really are like crack, aren’t they?