Citizen science study: Ticks are dangerous all year – plus, a new disease 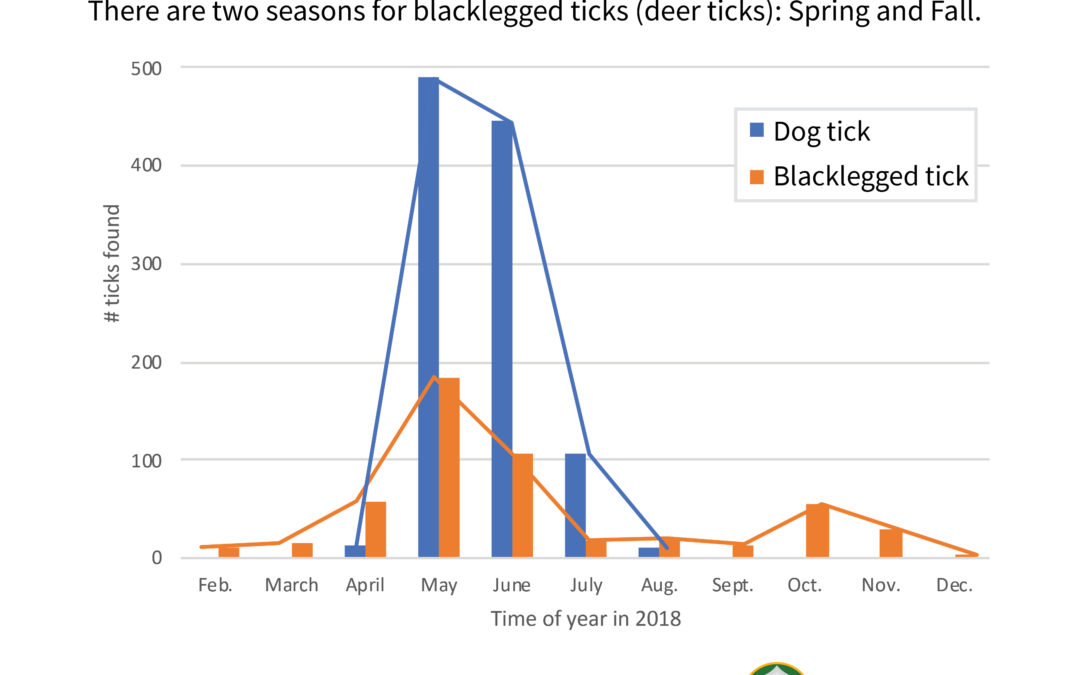 Dog ticks are only around in spring and early summer - but they're not the ticks we have to worry about. Chart by Sharon McElroy—BeBop Labs

A citizen-science study based in Plymouth has found what appears the be New Hampshire’s first case of a new tick-borne disease and also produced some unwanted news: Tick bites are dangerous all year round.

The first year of research by the nonprofit BeBop Labs has found that while the chance of encountering a tick declines in winter – although it doesn’t disappear entirely unless the ground is covered with snow – the diseases passed through tick bites, including Lyme, do not dissipate.

“When we looked at what time of year do we find tick-born diseases (in ticks) there was no trend. It really looks like there are diseases all year round, even the co-infections; no spikes, no trends,” said Kaitlyn Morse, a Ph.D. who started and runs the nonprofit BeBop Labs in Plymouth.

This is the first round of analyzing ticks that had been found and sent in by volunteers. A total of 1,654 ticks were sent in last year – 1,100 dog ticks and 554 black-legged ticks, often called deer ticks. Of those, 822 were tested for a number of diseases. Depending on where in the state they were collected, between one-quarter and one-half of ticks carried pathogens that cause at least one disease, usually Lyme.

Between 5% and 10% of ticks carried a disease-causing pathogen known as anaplasosis while a third pathogen commonly associated with black-legged ticks, basesia, was more erratic. In Merrimack County, 12.5% of ticks carried babesia as did nearly as many in Rockingham County, yet in half the state’s counties it was not found at all.

More results can be found at the website, www.bebop-labs.com/. The program emphasizes prevention – dressing and behaving in ways to minimize the chance of encountering a tick.

Morse cautioned against reading too much into the data because it represents only one year.

“In my opinion I think there needs to be three years of data to get a real trend. Some of the counties are not well represented,” she said. “But it is, I think, an indication of what’s out there.”

The disease data was combined with public data from UMass Amherst Lab of Medical Zoology and a firm called Ticknology, she said. 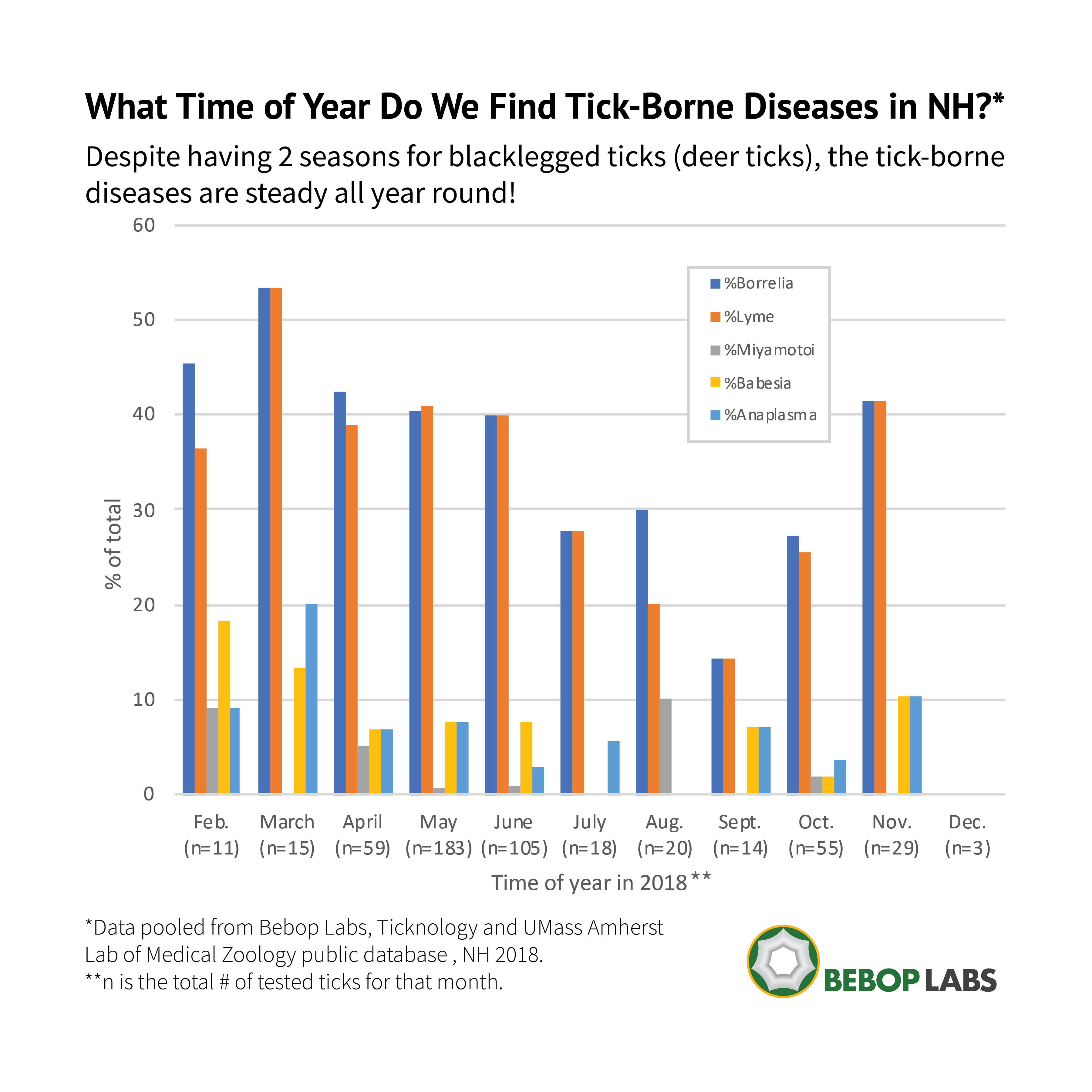 Last year the program asked people to send in ticks they pluck off their clothing or their skin, along with information about when and where it was found. The goal is to create information that is special to time and place about the risk of getting Lyme and other tick-borne diseases.

The first year’s population numbers confirmed a well-established understanding that there is a season for encountering the ticks which carry Lyme and related diseases – actually, two seasons.

Right now is prime season for both black-legged ticks, often known as deer ticks, as well as dog ticks, since newborn ticks are out and hungry in April and May. For black-legged ticks, September and October are also prime time as they bulk up for winter, while dog ticks are rarely encountered after early summer, according to the Beops Labs data. Dog ticks are much less of a concern to people; none of the them tested by the group carried Lyme or other diseases.

A surprising, and distressing, piece of information from tick testing was the presence of a disease pathogen called miyamotoi.

“This is the documented case in New Hampshire of ticks with miyamotoi,” Morse said.

While this disease was much less prevalent than Lyme, it was about as common as another disease-causing pathogen called babesia which is often found in Lyme-bearing ticks. In ticks collected in Grafton County, in fact, miyamotoi found in 5% of ticks, compared to just 3% for babesia.

BeBop Labs, named after Morse’s chocolate Laborador retriever, seeks to combine research into tick-borne diseases, GIS mapping and sociological research with outreach and public education on the other. It received confirmation as a tax-exempt nonprofit just this month.

Morse started the project partly because she felt that understanding of tick-borne diseases was lacking in central and northern New Hampshire, as compared to long-running concern in the southern portions of the state.

“Neighboring states have more data and information than New Hampshire, they have programs in place. New Hampshire is often following on their coattails,” she said. “This could make New Hampshire a leader in tick surveillance – using hands-on science, having every individual be proactive in answering their own questions.”