No-till & other types of sustainable farming are catching on in N.H. 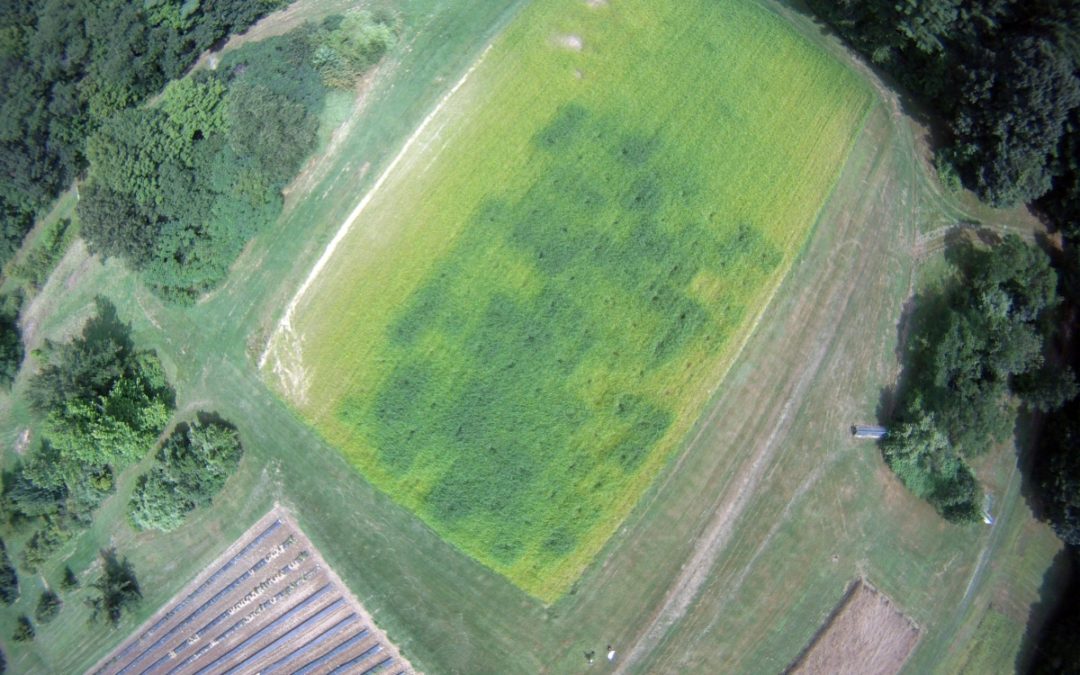 An aerial photo shows a checkerboard pattern of the cover crop project at the experiment station’s Woodman Horticultural Research Farm. Areas that had previously been planted with forage radish or some of the legume were much darker green than areas where other cover crops had been planted. Credit: Rich Smith/UNH

From UNH News Service: New Hampshire farmers are increasingly moving to more sustainable farming practices, with those adopting no-till, reduced-till, and cover crop practices dramatically increasing since 2012, according to the 2017 Census of Agriculture.

Finally, the number of acres of cropland planted with cover crops increased from 5,025 acres to 8,326, an increase of 66 percent. Cover crops are plants that are grown before or after cash crops are planted and harvested. Cover crops protect soil from erosion, improve soil fertility, suppress weeds, and/or provide additional habitat for pollinators and other beneficial organisms. Because they minimize erosion and can help to keep nitrogen and other nutrients from leaching to ground waters or being lost via other pathways, cover crops can be important tools for reducing pollution and other negative environmental impacts associated with agricultural activities.

New Hampshire Agricultural Experiment Station researcher Richard Smith, associate professor of agroecology, has conducted extensive research about these sustainable farming practices at the experiment station’s Woodman Horticultural Research Farm and Kingman Research Farm. “These data are good news for not only farmers, but for the citizens of New Hampshire. Farmers are benefiting from the biological sources of fertility, weed suppression, and soil protection that cover crops provide to their farming systems, and the public benefits from all of the other ancillary effects that come from wider-spread use of cover crops, including cleaner water and a more resilient food supply,” Smith said.

The two-year study allowed researchers to determine not just the average values for each cover crop but also the consistency of each cover crop’s performance. “Based on our research, we found that forage radish was consistently among the highest biomass-producing species in the fall, provided excellent fall weed suppression, and resulted in some of the highest productivity values in the test-crop,” Smith said.

Smith and his colleagues also found that cover crops can help reduce the need for tillage in some organic vegetable systems. Specifically, they investigated using black tarps to kill cover crops prior to planting a cash crop. Once the tarps are removed, the cash crop can be planted directly into the dead cover crop, providing a weed-suppressive mulch for most of the growing season. This allows farmers to forgo tilling, which can have negative effects on soil.

“Many people relish the bucolic image of a plowed field or a tilled garden, but tilling the soil has deleterious effects on soil structure and biology. A tilled, bare soil is vulnerable; in a dry summer like 2016, it dries out quickly from evaporation, leaving plants struggling to get enough water, and in a wet year, it is susceptible to erosion losses. Nonetheless, extensive tillage is the standard practice for vegetable production, largely because of the need to control weeds,” said Natalie Lounsbury, a doctoral student in agroecology and member of Smith’s agroecology research lab.

Smith has worked to inform Granite State farmers about the results of his research and benefits of these sustainable agriculture practices. He has presented his research to farmers, students, UNH Cooperative Extension personnel, other agriculture professionals, and the public interested in management strategies for improving the agronomic and environmental performance of crop production systems appropriate for Northeast farmers. This includes a presentation at the popular N.H. Farm and Forest Expo.

Between 2016-2018, the team held a series of farmer forums and field meetings to highlight cover cropping and no-till practices in use across the state, under a variety of production systems. They produced a series of short videos featuring farmer testimonials and demonstrating their techniques.

“It’s certainly been a great help having the people and resources at the experiment station in carrying out this work. I’ve worked with Rich Smith and others to discuss research ideas and to speak at various programs I’ve organized, and I’m glad to be able to tap into their expertise,” Majewski said. “At the same time, extension can facilitate connecting experiment station researchers with producers, putting the research they conduct into practice.”

Recently, Majewski worked with Smith and Nick Warren, doctoral student and manager of the UNH agroecology laboratory, to help dry samples of cover crop mixes for a project on measuring biomass.

“Farmers in the Northeast are not afraid to innovate and experiment with new practices; however, they are also constrained by the realities of needing to run a profitable operation. That is where research by the NH Agricultural Experiment Station and outreach by UNH Cooperative Extension can help. We do the research to test novel practices, such as using cover crops or strategies for reducing tillage, which farmers might initially consider too risky to try on their own farms. We and extension then share those results, the practices that prove to be most beneficial, as well as those that did not work out the way we planned, so that farmers have the best information upon which to base their management decisions,” Smith said.

This material is based upon work supported by the NH Agricultural Experiment Station, through joint funding of the National Institute of Food and Agriculture, U.S. Department of Agriculture, under award number 229253, and the state of New Hampshire.