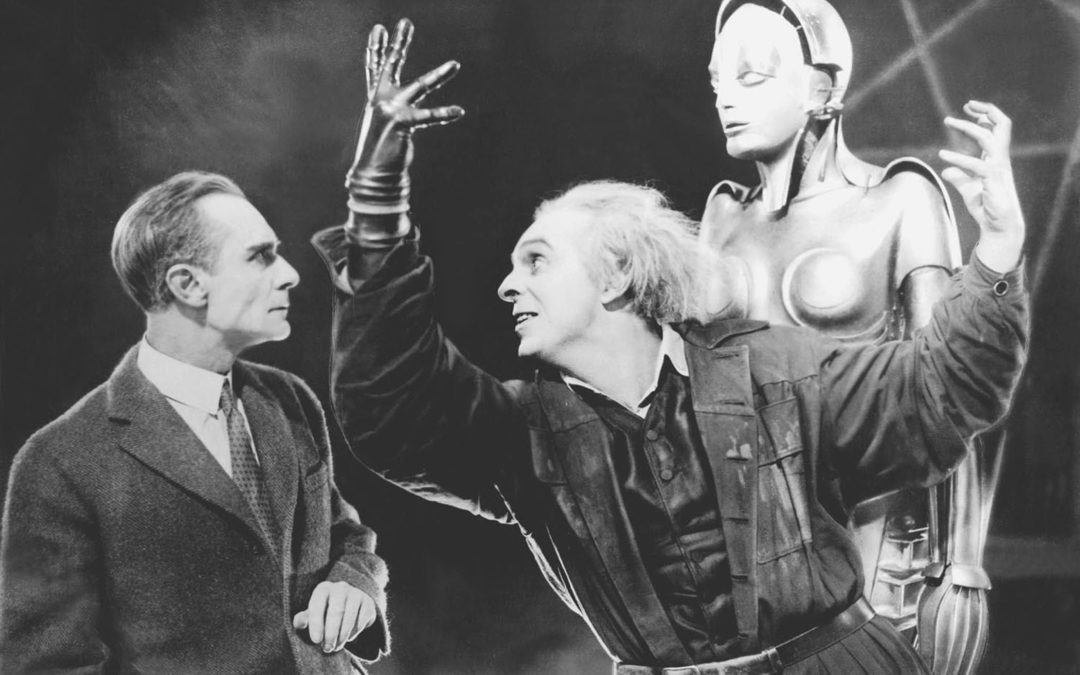 They don't overact like that any more! Industrialist Joh Frederson (Alfred Abel) looks on as scientist Rotwang (Rudolf Klein-Rogge) outlines his vision for a human-like robot in 'Metropolis' (1927).

I am slightly embarrassed that I have never seen “Metropolis”, the 1927 silent film that is generally considered the grandfather of all science fiction movies. I’ll fix that June 23 when it will shown – with live music! – at the coolest movie theater in New Hampshire, the Town Hall Theatre in Wilton.

It starts at at 4:30 p.m. at the Town Hall Theatre, 40 Main St., Wilton. Admission is free; a donation of $5 per person is suggested to help defray expenses.

Original music for ‘Metropolis’ will be performed live by Jeff Rapsis, a New Hampshire composer and silent film accompanist who performs at venues around the nation. I have seen Jeff play his own music at other silent movies in Wilton and it really makes for a different experience.

“Metropolis” by German director Fritz Lang, is set in a society where a privileged elite pursue lives of leisure while the masses toil on vast machines and live in poverty. With its visions of futuristic factories and underground cities, it set new standards for visual design and inspired generations of dystopian fantasies from Ridley Scott’s “Blade Runner” to Terry Gilliam’s “Brazil.”

The version of ‘Metropolis’ to be screened at the Town Hall Theatre is a newly restored edition that includes nearly a half-hour of missing footage cut following the film’s premiere in 1927. The lost footage, discovered in 2008 in an archive in Argentina, has since been added to the existing ‘Metropolis,’ allowing plot threads and characters to be developed more fully.

When first screened in Berlin, Germany on Jan. 10, 1927, the sci-fi epic ran an estimated 153 minutes. After its premiere, the film’s distributors (including Paramount in the U.S.) drastically shortened ‘Metropolis’ to maximize the film’s commercial potential. By the time it debuted in the U.S. later that year, the film was only about 90 minutes long.

Even in its shortened form, ‘Metropolis’ became a cornerstone of science fiction cinema. Due to its enduring popularity, the film has undergone numerous restorations in the intervening decades in attempts to recover Lang’s original vision.

In the summer of 2008, the curator of the Buenos Aires Museo del Cine discovered a 16mm dupe negative of ‘Metropolis’ that was considerably longer than any existing print. It included not merely a few additional snippets, but 25 minutes of “lost” footage, about a fifth of the film, that had not been seen since its Berlin debut.

This fully restored, 2 1/2-hour edition will be screened at the Town Hall Theatre.