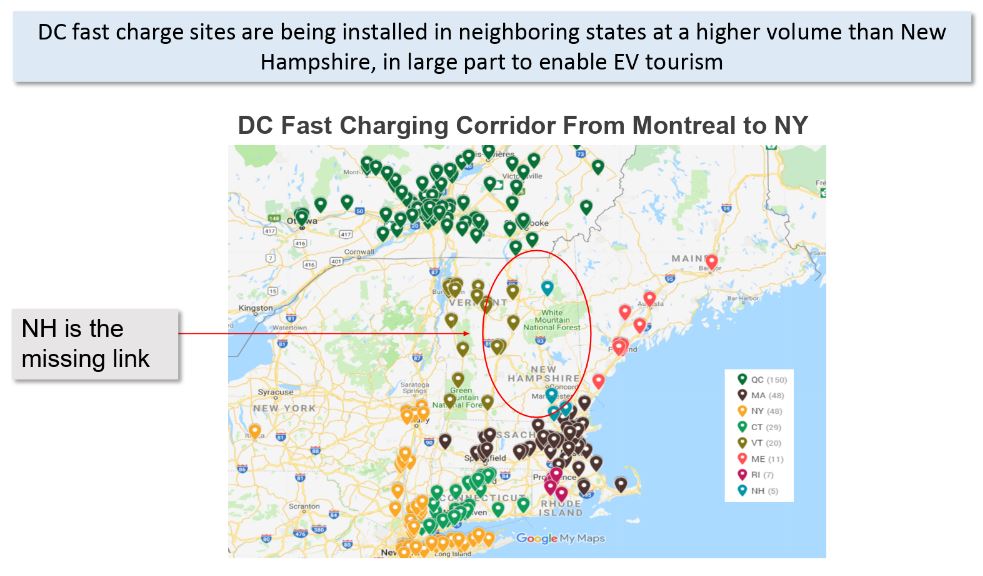 The state’s three biggest electric utilities are proposing to create a dozen fast-charging stations for electric vehicles along interstates in New Hampshire, using money from the Volkswagen emissions-rigging settlement to create the state’s first such network open to cars other than Tesla.

“What we’re going to propose is to electrify the tourism corridors – interstates 93, 89, 95 – so that individuals who own electric vehicles have a place to recharge, aren’t waiting 8 hours to charge a vehicle, but 15 minutes in and out,” said Bill Quinlan, president of Eversource New Hampshire operations during a discussion Thursday morning during a Concord Chamber of Commerce forum on energy.

The proposal from Eversource, Liberty Utilities and Unitil will be unveiled in the next month or so as part of the state’s Environmental Mitigation Plan.

Details, including the exact locations, number of charging stations at each stop as well as their electrical output, are being worked out. A presentation by Eversource showed 12 possible locations. The closest to Concord are at the Hooksett tolls, where Tesla has a Supercharger, at the intersection of I-89 and Rt. 202 in Hopkinton, and at the I-93 exit in Tilton.

As discussed Thursday, the program would be a public-private partnership using $1.9 million of the state’s settlement from VW to buy the fast chargers. Eversource would pay to hook them into the power grid, recouping the cost from increased sales of electricity, while the operation of the stations would be done by a private firm that wins the bid.

Public charging stations are designed to quell “range anxiety,” the fear a car will run out of power with nowhere to charge up. Even though roughly a dozen models of electric car are now sold that can travel further than 200 miles on a single charge and the vast majority of car charging is done at home or at work rather than at the electricity equivalent of gas stations, range anxiety is seen as one of the major obstacles keeping people from buying an electric car.

Because electric motors are more efficient than internal-combustion engines and because it is easier to clean up the sources of electricity than the tailpipes of millions of vehicles, electrifying cars and trucks is seen as an important part of fighting climate change.

The money for the charging stations comes from the state’s portion of a $15 billion settlement of a lawsuit by the U.S. government against Volkswagen for rigging its diesel vehicle’s computers to cheat emissions tests and downplay emissions of nitrogen oxide. The settlement is distributed to states based on the number of vehicles affected; New Hampshire is receiving $31 million.

As previously announced, $4.6 million of the state’s money will build charging infrastructure for electric vehicles; $15.5 million will go toward replacing diesel-powered vehicles owned by state and local governments, including school buses, with newer diesel or alternative-fuel vehicles; $6.2 million will be up for bids from public or private groups that have proposals for ways to spend it that will meet the program’s goals of reducing the state’s air pollution caused by vehicles; and $4.6 million has been earmarked for administrative costs.