Old film of famous NH flight under a bridge 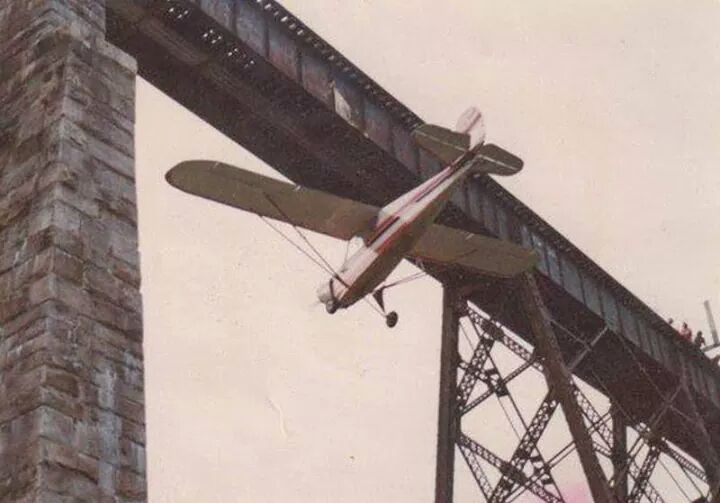 Mason resident Bronson Potter flies his plane under the Greenville railroad trestle, prompting the FAA to revoke his pilot's license, in 1979. Photo by Tim Berry.

It was a highlight of the summer of 1979: a local pilot’s daring flight under the huge railroad trestle that once spanned the Souhegan River in Greenville.

The program is free and the public is invited. Donations will be accepted to help defray expenses. The event is sponsored by the Aviation Museum of New Hampshire, the Mason Conservation Commission, and Back Lot Films.
Although the footage has been transferred to digital format, the original 8mm film will be projected for the premiere.

The film, which lasts about five minutes, contains scenes of pilot Bronson Potter flying several practice runs towards the bridge while spectators watched on nearby Route 31.

It then captures the daring run under the trestle, for which Potter had to fly through a narrow space between a metal support tower and a solid granite pillar.

At the time, pictures of Potter’s plane zipping under the trestle made newspapers around the region. The publicity led the FAA to temporarily suspend Potter’s pilot’s license.

The film has no soundtrack; live music will be provided by accompanist Jeff Rapsis, who accompanies silent film programs each month at WIlton’s Town Hall Theatre.

The railroad trestle, once the highest in the state, was taken down in 1984 after the Boston & Maine railroad abandoned the line to Greenville.
Local residents who attend will be encouraged to share recollections and stories about Potter, a long-time Mason resident and eccentric inventor who died in 2004. His gravestone features a carved image of his plane flying beneath the towering trestle.

Potter, a Harvard graduate and electronics innovator in his younger years, lived much of his life in Mason. After his death, he bequeathed more than 500 acres of land to the Mason Conservation Commission, the largest such gift in the town’s history.

To help preserve memories and stories of Bronson Potter, local filmmaker Bill Millios will be on hand to arrange for interviews with residents; the footage will be used by the Aviation Museum to create a mini-documentary about Potter and his legendary stunt.

Although the trestle was dismantled, the granite abutments still tower over the Souhegan. Using a drone-mounted camera, Millios plans to recreate Potter’s daring flight near the granite pillar from the pilot’s eye-view.

Music for the evening will be provided by The Dirty Double Crossers, a local bluegrass band.

The world premiere of recently rediscovered home movie film of Bronson Potter’s 1979 Greenville Trestle Fly-Under will be held on Friday, Aug. 9 at 7 p.m. at Mason Town Hall, 6 Meetinghouse Hill Road, Mason, N.H. The program is free and the public is invited; sharing of Bronson Potter stories will be encouraged.