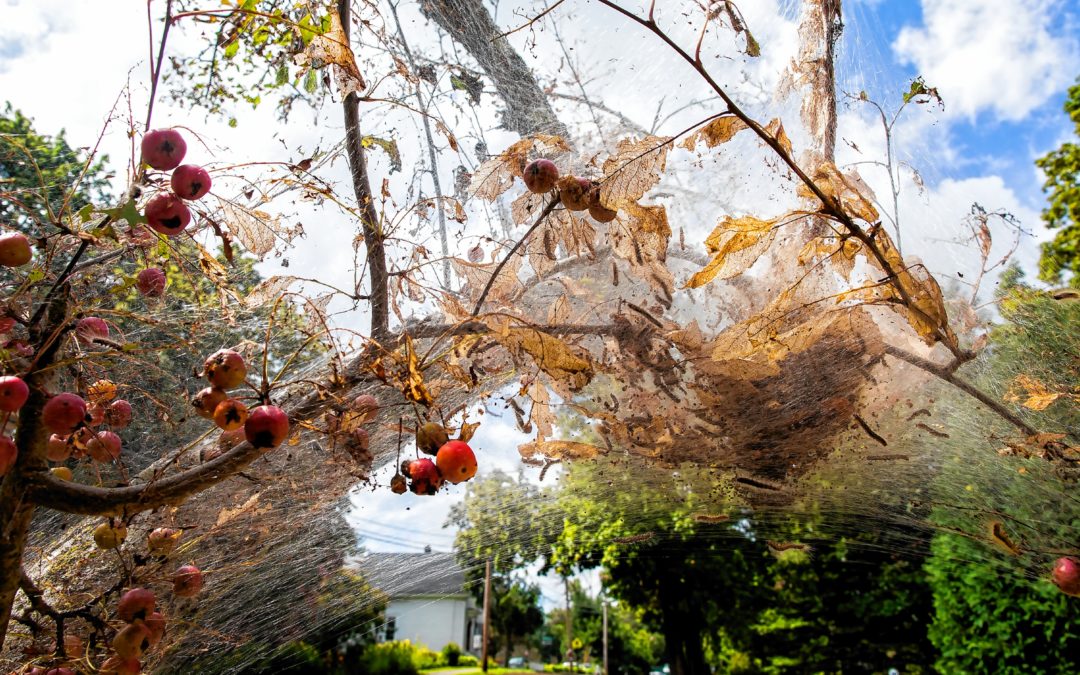 Webworms have taken over a branch of a crabapple tree on Hutchins Street in Concord. / Monitor photo Geoff Forester

There are certain rituals which signal the coming end of New Hampshire’s summer, and one of them is showing up at the end of tree branches all over the place.

“Drive down any street and you’ll see them,” said Kevin Clough, owner of K. Clough Landscaping & Design of Concord. “We do 20 condominiums, and they’re everywhere.”

We’re talking about webworms and the gauzy, sticky nests they build in trees. While they show up every August and September, they seem more numerous this year, at least in the Concord region. It’s not clear why.

“I think it’s just the cycles of nature,” said Clough, pointing to another example: “Last year the squirrels and chipmunks were really bad but this year you don’t see them.”

Webworms might be ugly but they don’t do much harm because they arrive late, after trees have already stored up energy for the winter.

“As long as you don’t let them take over the entire tree, they’re not bad,” said Clough.

Contrast that with tent caterpillars, which are less noticeable because they build their nests in the crotch of limbs but cause more damage because they show up in spring when trees are recovering from winter.

For people who don’t like the look of webworms, the solution is simple: rip it out of the tree next with a pole or stick. Just ripping holes in a nest can stop it from growing because it allows predators to get at the caterpillars.

Clough says his team tears nests down or, if necessary, will prune the branches where the nests have been built.

The fall webworm is the larval stage of a small white moth called Hyphantria cunea.

The caterpillars are about an inch long with pale yellow coloring. They extrude a silk-like substance used to create their gauzy, sticky nests; they spend the larval state inside them, protected from predators, eating leaves. As they finish one batch of leaves, they expand the next to take over more.

The caterpillars mature in about 6 weeks. Eventually the nests break apart, dropping pupae to the ground, where they overwinter in bark and debris. Adults emerge in late spring, laying hundreds of eggs on the underside of leaves, and everything starts over.