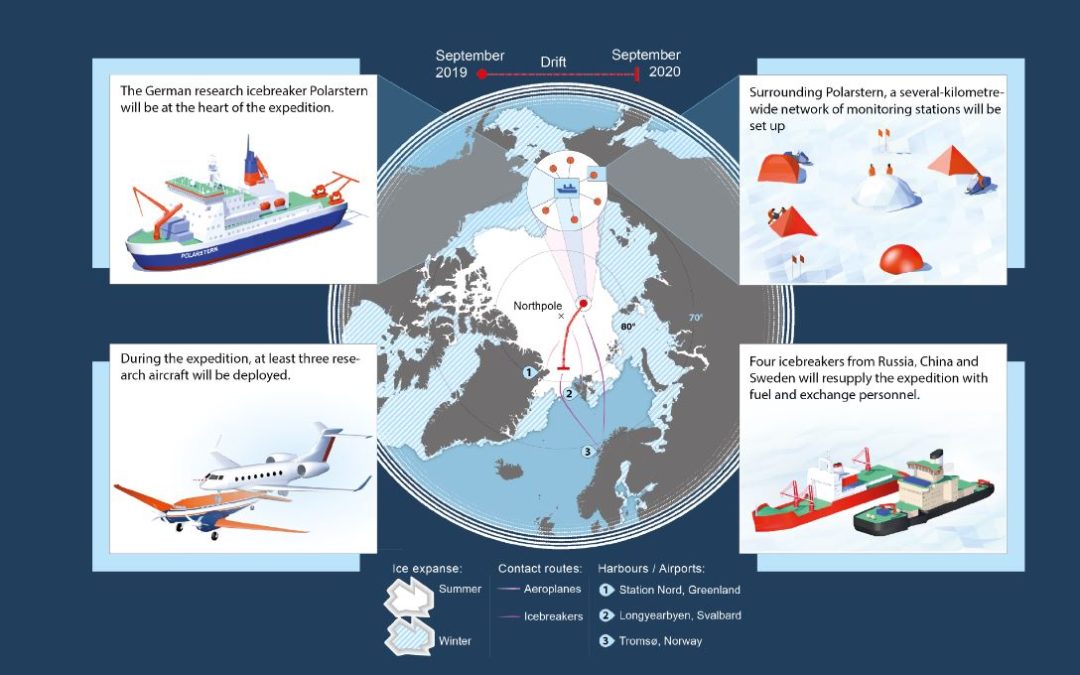 One of the most worrisome feedback mechanism in global warming is the release of methane – a very potent, if relatively short-lived, greenhouse gas – that’s trapped in arctic permafrost. As the poles warm the methane is released, leading to more warming, etc.

A team from UNH is involved in long-term research on the topic, including lots of long vigils in winter-darkened peatlands. Reuters has a good story about them – check it out here.

Meanwhile, a team from Dartmouth is motoring toward the North Pole, part of a multi-national team looking to get locked in ice over the winter for research. Here’s a report from the college:

Dartmouth experts on Arctic sea ice and snow cover are taking part in what is billed as the “largest polar expedition in history.” The year-long, multinational Arctic expedition began today when a German icebreaker, the Polarstern, set sail from Tromsø, Norway.

The Polarstern will intentionally lock itself into the Arctic ice. Once frozen into the ice, the icebreaker will drift with the floe as it tracks across the ocean to study the health of the high Arctic.

The “Multidisciplinary drifting Observatory for the Study of Arctic Climate” (MOSAiC) expedition marks the first time a modern research icebreaker will be set to drift in the Arctic for an entire year. The path of the drift is expected to allow scientists to comprehensively investigate the region, including by observing the Arctic winter in the vicinity of the North Pole.

“Hopefully, this study will be historic not only for its scale, but for its ability to allow us to understand the causes and consequences of changes in the Arctic,” said Donald Perovich, a professor at Dartmouth’s Thayer School of Engineering and the expedition’s co-lead for sea ice research.

Planning for the MOSAiC expedition began about a decade ago. Climate processes in the central Arctic that will be studied in the research form a missing piece in the puzzle that is needed to better understand global climate change.

“ The impacts of climate change are amplified in the Arctic, so this could be our best shot to explore the region while there is still time to assess and respond to change,” said Perovich, a member of the expedition’s project board.

MOSAiC is led by the Alfred Wegener Institute, Helmholtz Centre for Polar and Marine Research.

During the year-long expedition, nearly 300 researchers from 17 countries will rotate aboard the Polarstern. The project will deploy an international fleet of four icebreakers as well as helicopters and fixed-wing aircraft to support the research. In total, the expedition will include 600 international participants and cost about $155 million.

“The uncertainties in our climate models are nowhere bigger than in the Arctic,” said Markus Rex, head of MOSAiC and an atmospheric physics expert from the Alfred Wegener Institute. “There aren’t any reliable prognoses of how the Arctic climate will develop further or what that will mean for our weather. Our mission is to change that.”

Dartmouth researchers participating in MOSAiC include Perovich, Thayer graduate students Ian Raphael and David Clemens-Sewall, as well as Christopher Polashenski, an adjunct assistant professor at Thayer and a research geophysicist at the Cold Regions Research and Engineering Laboratory (CRREL).

Perovich, Clemens-Sewall and Polashenski will sail on later legs of the expedition. Raphael will join the Polarstern for a second time in August 2020 for the expedition’s final leg.

“MOSAiC is so critical because the sheer volume of data that we will collect simply isn’t feasible any other way,” said Raphael, who will research ice growth and the melting of sea ice. “We already know that the climate is rapidly changing, and we have enough data to understand why. We desperately need structural change, and that starts with evidence that can’t be ignored.”

In addition to the Dartmouth team, countries represented in the expedition include Belgium, Canada, China, Denmark, Finland, France, Germany, Great Britain, Japan, the Netherlands, Norway, Poland, Russia, Spain, Sweden and Switzerland. The ship-based teams will be supported on land by researchers from Austria and South Korea.