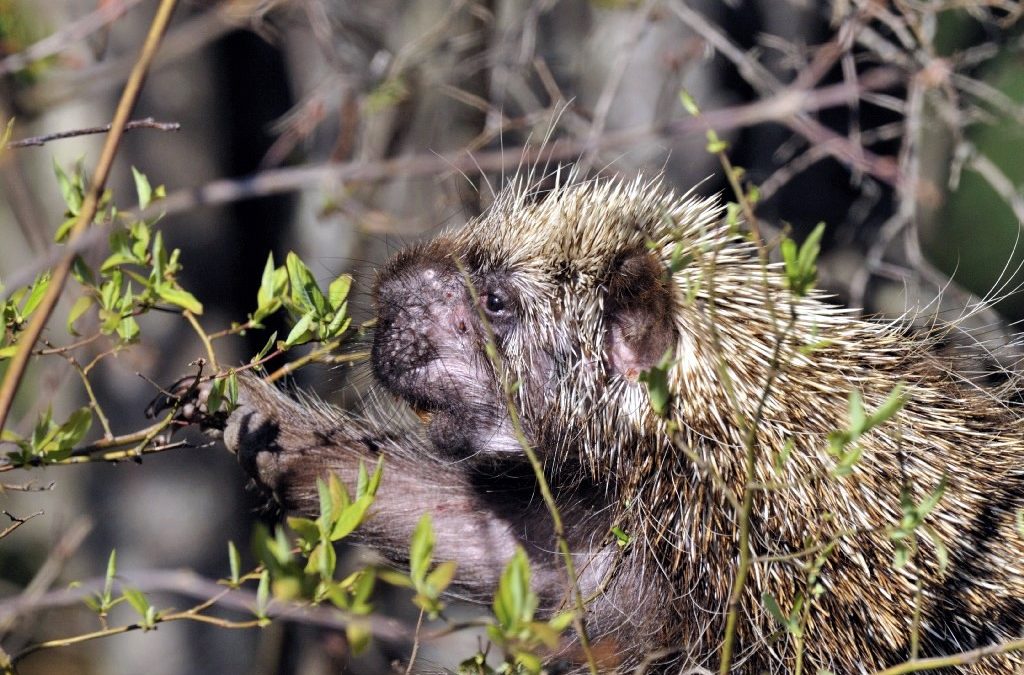 From UNH News Service: A debilitating, often fatal fungal disease has been discovered in wild North American porcupines in Maine, Massachusetts, and New Hampshire, according to the New Hampshire Veterinary Diagnostic Laboratory at the University of New Hampshire.

UNH pathologists found that 12 wild porcupines taken to wildlife rehabilitators in Maine and Massachusetts with what appeared to be mange were actually infected with a disease caused by a common fungal organism found in domesticated cats and dogs, mice and livestock, and sometimes humans. The free-ranging animals, most of which were found in coastal areas of Maine and New Hampshire, were infected with Trichophyton mentagrophytes/Arthroderma benhamiae, causing a severe skin disease. The porcupines were among 44 submitted to the lab during the seven-year study period.

“The fungus that we found to be infecting these animals usually causes localized, often minor skin infections in animals and people. In porcupines, however, the skin lesion becomes severe and spreads to affect the whole body, resulting in debilitation and death, if not treated. The disease caused by this fungus has never been reported in historical documentation about porcupines,” said David Needle, senior veterinary pathologist and assistant clinical professor with New Hampshire Veterinary Diagnostic Laboratory at UNH.

“The rarity and severity of this skin lesion occurring in likely unrelated wild porcupines from three states is noteworthy and suggests there may be a subpopulation of the species across the region with immunologic susceptibility for this particular pathogen, as has been seen with scabies,” Needle said.

UNH pathologists collaborated with Dr. Laura Goodman and her team at the Cornell Animal Health Diagnostic Center, who developed advanced molecular techniques of deep sequencing that allowed UNH scientists to confirm that older cases of porcupines with signs of the skin disease were infected by the same pathogen. These new molecular techniques now will allow pathologists to analyze older specimens of animals previously thought to be too difficult for such specific and granular molecular analysis to be investigated for the presence of important fungal pathogens. These pathogens then can be traced back to patterns of emergence and re-emergence of fungal diseases that were previously unknown.

The newly discovered fungal disease in porcupines is zoonotic, which means it can be passed on to humans, although there are no documented cases of T. mentagrophytes being caused by contact with porcupines. It also comes at a time when there has been an emergence of fungal diseases that have resulted in significant population declines of bats, amphibians, and snakes on multiple continents.

Going forward, researchers plan to use these new molecular techniques to test other archived tissue samples to provide a blueprint for themselves and other researchers to perform retrospective studies to identify pathogens in cases with no remaining fresh tissues.

“North American porcupines are an important and widespread member of the wild lands of New Hampshire and New England, with impacts on various tree species throughout the state. The porcupine serves as a primary food source for the fisher, which is itself an iconic animal of New Hampshire on the decline. This study is therefore important from the standpoint of the species affected, but also regarding what effect a decrease in this species population or activities could have on the wild landscape and the natural food web,” Needle said.

This research is presented in preprint format, prior to peer review, in the journal Pathogens (doi: 10.20944/preprints201908.0227.v1) in the article “Atypical Dermatophytosis in 12 North American Porcupines (Erethizon dorsatum) from the Northeastern United States 2010-2017.” This research also was presented at the 2018 American Association of Veterinary Laboratory Diagnosticians and the 2017 American Association of Zoo Veterinarians Zoo and Wildlife Pathology Workshop.

This research is supported by the New Hampshire Agricultural Experiment Station and the State of New Hampshire. It is part of the New Hampshire Veterinary Diagnostic Laboratory’s One Health effort, a collaborative, global movement that unites physicians, veterinarians, ecologists, and many other life science professionals in addressing and preventing health threats in people, animals, and the environment.