What are roadsides good for? Pollinator habitat 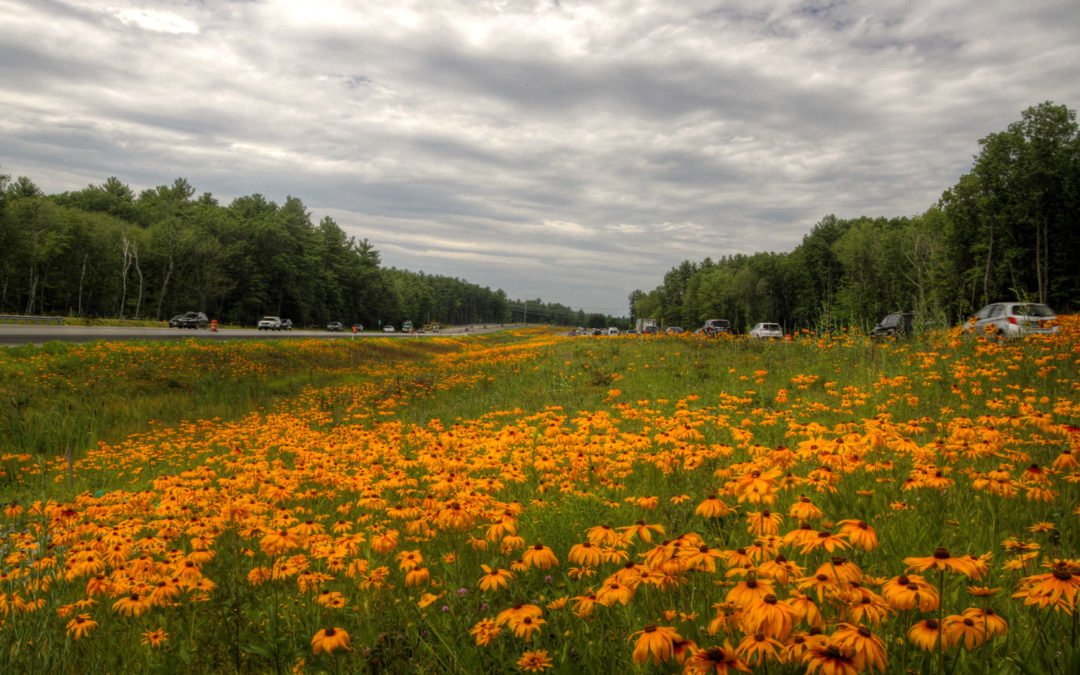 Black-eyed Susans alongside I-93 in Londonderry, between exits 4 and 5, on July 16, 2019. Photo: Barbara Rollins, N.H. Department of Transportation

Here’s one way to think about the latest effort by New Hampshire Fish and Game to support pollinators: It’s the skinniest environmental program in the state.

The target of the program, which just got a funding boost, are the rights-of-way that the state owns on both sides of its roads and highways. These are very long and narrow strips of land. Some are less than 20 or 30 feet wide, but they add up.

“The state has just under 5,000 miles of roads, everything from turnpikes to local roads,” said  Heidi Holman, wildlife diversity biologist at Fish and Game.

Rights of way along all that mileage totals tens of thousands of acres, which isn’t used for much except road signs.

Fish and Game has received a $50,000 grant from the New England Forests and Rivers Fund, boosted by $50,000 in matching state funds and grants, in hopes of using it for something else: Raising plants that support butterflies, bees and other pollen-eating insects.

That sounds like it would be easy – just toss out lots of flower seeds. But as always, the devil’s in the details.

“We need to be cautious about safety, because that is a priority,” said Holman.

This is particularly an issue with mowing, which is often needed for driver visibility or to provide places for cars to safely pull off the road. The Department of Transportation has long had mowing schedules based on various requirements, including location of equipment, but those may not fit the life cycles of butterflies or the budding schedules of wildflowers.

“We’re really looking at this as a voluntary measure on the state’s part at this time. DOT brought in people to talk about how this would impact them. They’re on board, they want to do good things, but we have to lay out a plan that’s feasible, so they’re not trucking tractors back and forth around the state,” said Holman.

Among the factors being examined are traffic and speeds in the area – there’s no point in attracting bugs if they’re going to be wiped by tractor-trailers going 75 mph – and how much salt is used to maintain a road.

The department will be running tests and pilot programs on several different measures that are deigned to help monarch butterflies, partly because people are crazy about this famous insect, partly because there is lots of information about how to protect its habitat, and partly because anything done to help them will also help many other pollinators.

“We’re using tools by Monarch Joint Venture (a collaboration to protect the monarch’s migration patterns) to assess where best pollinator habitat could be located in the state along rights-of-way,” said Holman. “For mowing, we’ll if there’s a timing that might need to be shifted in a given year. Maybe some places will be mowed every few years. … Perhaps there are places where some brush could be removed to expand the habitat.”

Holman said projects like this are easier these days because of public concern about the decline of pollinators, not just honeybees but virtually all pollen-eating insects.

“We started with a few charismatic species – start with honeybees and monarchs, then we walk down from there what we can monitor and handle. As we continue the conversation, we’ll be able to broaden our perspective,” she said.

The key often isn’t just planting more of a certain kind of flower, but making it feasible for many types of native flowers to bloom at different times of the year – which, admittedly, means that at times during the season these areas might look brown and untended.

“When we focus on diversity that has evolved with our native plants, we’re more likely to protect the pollinators over time,” Holman said. “By diversifying the habitat, we’ll support a diversity of wildlife.”