Ranked-choice voting for the Democratic primary – now available in the Monitor! 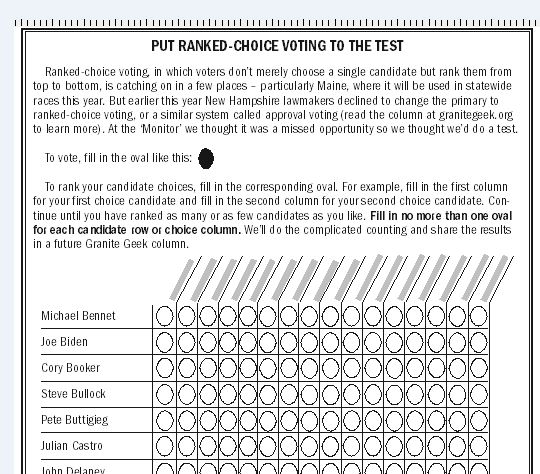 For the entire ballot, you have to buy a copy of the paper.

If there was ever an election where ranked-choice voting would be useful, the upcoming Democratic Presidential Primary is that election.

A slew of candidates! No obvious front-runner! A range of policies and personalities to choose from!

It’s a textbook example of a race where the “normal” system of voting for just one person – with the plurality leader declared the winner no matter what everybody else thinks – seems likely to do a poor job reflecting the electorate’s preferences.

Alas, the powers-that-be decided not to run the primary with an alternative voting system. So you are going to do it for them. We’ll help.

Here at the Monitor, we have created a Ranked Choice ballot for the Democratic primary. (When I say “we” I mean Sarah Pearson, the paper’s features editor and newsroom tech guru, who designed and created the ballot. Everybody say “Thank you, Sarah.”)

It is printed in today’s paper, and we will run it again several times over the next couple of weeks. You, dear reader, can fill it in, cut it out and mail it to us by Dec. 1. (NOTE: If you’re an E-edition subscriber, you can print it out and mail it in – but write on the ballot that you’re a subscriber. And don’t use Cyrillic letters or I’ll get very suspicious.)

You can send in multiple ballots, but you’ll have to get multiple copies of the paper because only newsprint ballots will be considered.

To keep results pure, no photocopies are allowed, and there’s no online version because that would just get manipulated somehow by Moscow hackers or political consultants who have to do something to justify all the money that rich candidates are throwing at them.

Before I explain how to vote, a comment: This is not – repeat, not! – a poll designed to predict the election’s outcome or to judge the value of any candidate. There won’t be enough responses to be statistically valid.

I’m doing this as a demonstration project of how ranked-choice voting looks and feels. The system has been adopted statewide by our neighbors in Maine and no longer seems quite as crazy as it once did; this is just a fun exercise to give us a little hands-on experience with it.

Two small points: The ballot was drawn up before Michael Bloomberg joined the race, and I’m not doing the GOP race because there aren’t enough viable Republican challengers to President Trump.

Okay, here’s how you vote. Just assign a unique choice level to as many of the candidates as you choose by filling out the appropriate oval.

During the first week of December, we will tally all the “first choice” listings on ballots. If anybody gets a majority of those votes, they win – just like a “normal” election.

If nobody gets a majority (more than 50 percent), we look at the candidate who got the fewest “first choice” listings. On ballots that listed him/her first, we take the candidate who was listed second and upgrade that person to first choice, then we count again. If there’s still no majority winner, we do this again and again, winnowing out candidates round by round until somebody gets a majority.

You can see how this system gives voters more say. Right now if your candidate doesn’t win then your vote has no effect, but in ranked-choice voting even when your preferred candidate doesn’t win, your second or third or fourth choice might get counted and might make the difference. In other words, even when you can’t boost your favorite you can boost your almost-favorite, and help keep out your least favorite.

Ranked-choice proponents say this forces candidates to be less extreme since they can’t win a multiple-candidate race just by appealing to their base. For years I doubted that argument in print, but I have changed my mind. Alternative voting systems certainly can’t fix democracy but I have come to believe that they can help trim its more virulent edges. Plus, it’s an excuse for a column! I’ll take that any day.