Bald eagles attack loons, but that’s not why loons are struggling 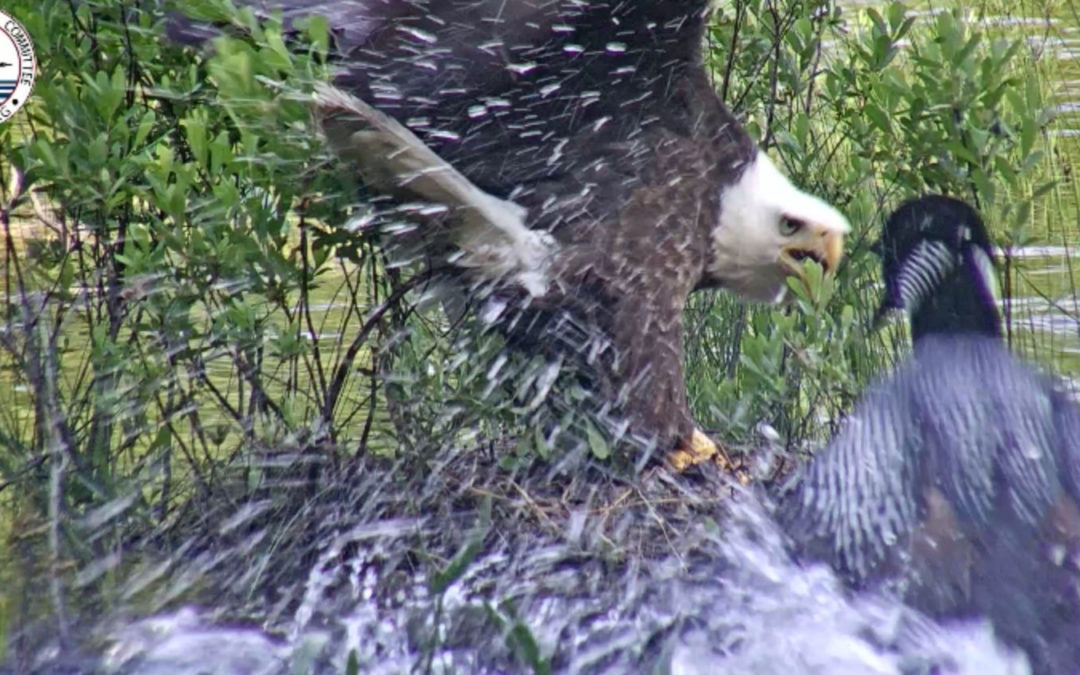 Bald eagles, as I’m sure you know, are making quite the comeback in New Hampshire (along with much of North America). New Hampshire Audubon and the Loon Preservation Committee wondered what effect this large fish-eating predator was having on another iconic fish-eating bird, the loon.

The team looked for evidence of predation attempts by an increasing eagle population, and whether this was limiting how successful loons are at raising young or if eagles provoked changes in where loons nest. The scientists found that eagle nest proximity may be contributing to about 3% of observed loon nest failures, but that this pressure does not account for local declines in loon abundance. Loons face a wide range of other simultaneous threats, including mortality from lead tackle poisoning, avian malaria, and entanglement in monofilament fishing line.

“We confirmed that eagles have joined a wide range of stressors currently impacting loons in New Hampshire,” said Loon Preservation Committee Senior Biologist John Cooley. “This result is great motivation to keep reducing the impacts caused by humans, like lead tackle poisoning, so that eventually the primary challenge for nesting loons can once again be natural predators like eagles.”

Here’s the rest of the press release:

A partnership between NH Audubon and the Loon Preservation Committee tells us more about the interactions between two of New Hampshire’s most iconic birds sharing the state’s lakes and rivers. The two wildlife conservation groups collaborated on an innovative study examining 16 years of breeding data for both Bald Eagles and Common Loons to evaluate what influence nesting eagles had on loon territory occupancy and productivity. A major article describing their findings appeared recently in the Wilson Journal of Ornithology.

For nearly 40 years, NH Audubon has partnered with NH Fish and Game to monitor and manage Bald Eagle population recovery.  The Loon Preservation Committee has a 45-year history of fostering Common Loon population recovery in the state. Loons remain on New Hampshire’s threatened list, while eagles were taken off the state’s threatened list in Spring 2017 because of significant progress toward full recovery.

NH Audubon President Doug Bechtel noted, “It’s interesting how loon and eagle populations have recovered to the point where we’re seeing more interactions between these two highly visible fish-eating species, something that probably used to happen regularly before they declined.”

Bald Eagles are known to steal fish from loons, sometimes harass incubating adult loons, and occasionally prey on loon eggs or chicks. Managing interactions between these species of conservation concern is challenging, particularly since so much evidence is anecdotal.

“For me, the single biggest take-home point is the incredible value of these long-term data sets,” said Martin. “Both LPC and Audubon gathered data on our respective species of concern for years. Then we realized that combining our data allowed us to ask and answer new and important research questions.”