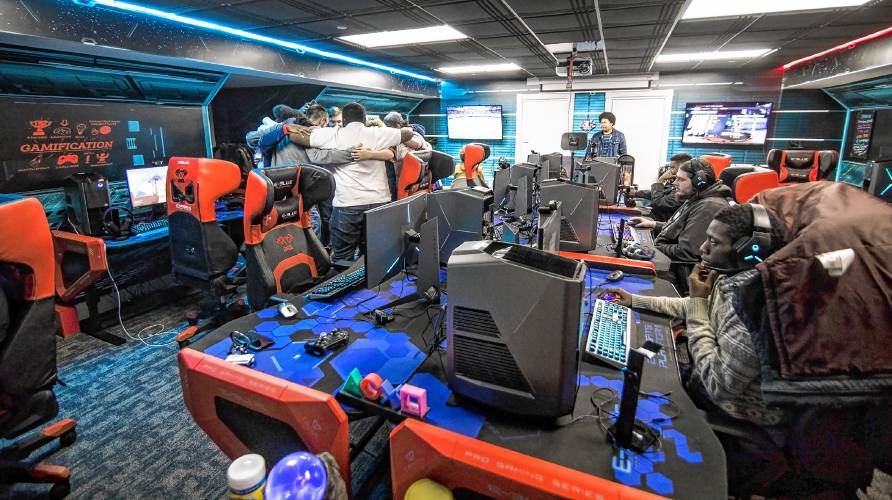 4 / 5 The New England College team huddles before matches in the new esports arena at the Simon Center. The arena has 14 high-tech computer consoles connected to their own broadband network, as well as console-connected high-definition screens inside and outside the room. GEOFF FORESTER photos / Monitor staff

Like all humans, I regard the things that I did as a teen and pre-teen to be the proper activities for those age groups and I scorn things that have become popular since then. Playing basketball on a team, for example, is normal but playing networked computer games on a team is kind of weird.

This Baby Boomer is especially unsettled by the idea of a massive industry built around watching other people play video games. I know that in theory it’s no sillier to watch a good Fornite player do things that you cannot do in the game than it is to watch the Bruins’ Tyler Seguin do things on ice skates that I cannot do. But it feels sillier to me, somehow.

So it was interesting to visit New England College during a match by its e-sports team, which the school has been pushing hard. (You can read the story here.)

The surprise for me was the way the event felt and sounded like “regular” team sports. From the pre-team cheer, to the way they scout opponents by watching “film” of past games (that is, VOD – video-on-demand), to the hours of practice to the way teammates shout encouragement and advice and warnings while they play, to the coach’s platitudes … it could have been lacrosse or rugby or football. Well, sort of.