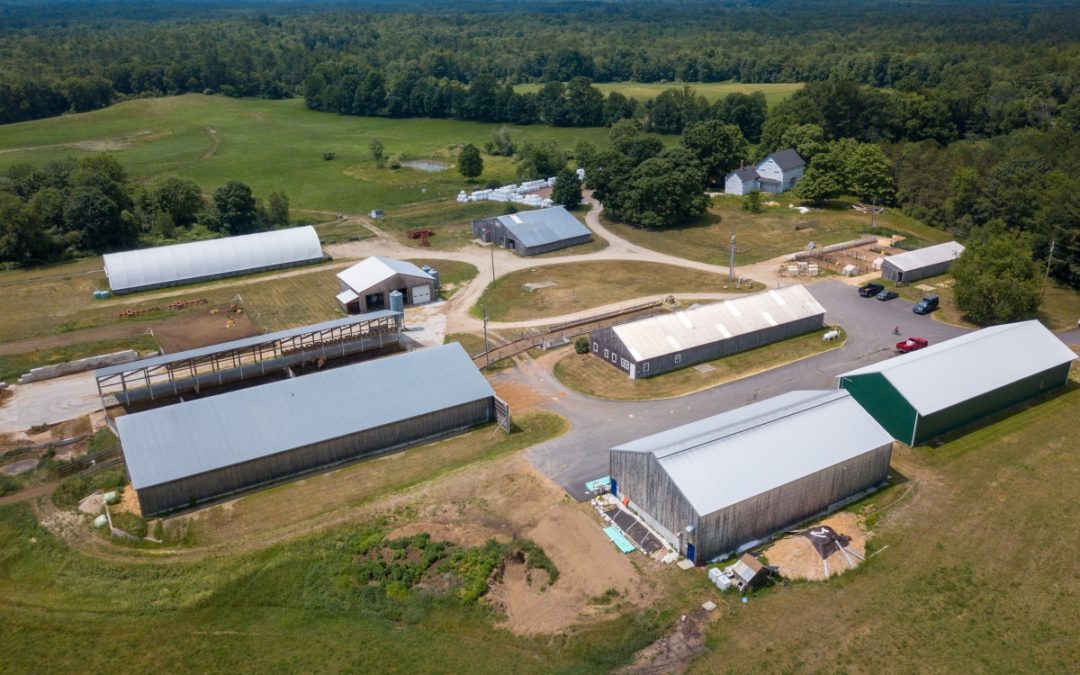 From UNH News Service: Organic dairy cows fed kelp meal produced less methane for part of the summer grazing season, according to researchers with the New Hampshire Agricultural Experiment Station at the University of New Hampshire. Based on these initial and other promising results, scientists will expand their studies to look at how kelp and other seaweeds impact animal health and methane emissions of organic dairy cows in New England.

Experiment station researchers will collaborate with New England scientists on a new $3 million grant from the Shelby Cullom Davis Charitable Fund to investigate reducing methane emissions of lactating dairy cows by supplementing their diet with kelp meal (brown seaweed Ascophyllum nodosum) and other seaweeds. Awarded to the Bigelow Laboratory for Ocean Sciences, the grant brings together researchers from UNH, Wolfe’s Neck Center for Agriculture and the Environment (Freeport, ME), Colby College, and the University of Vermont.

UNH’s portion of the project, about $600,000, involves conducting feeding trials with transition cows and grazing herds at experiment station’s UNH Organic Dairy Research Farm in Lee, N.H. Trials will be conducted in 2020 and 2021 by experiment station researcher André Brito, an associate professor of dairy cattle nutrition and management.

Specifically, Brito and his team want to see if seaweeds improve health and suppress greenhouse gas emissions in grazing dairy cows. Experiment station researchers will monitor milk production, milk quality, and body weight and condition. They will measure methane, carbon dioxide, and hydrogen emissions with the automated GreenFeed system (C-Lock Inc.), which uses built-in gas sensors to collect data on cow breath and burps and provides near real-time analysis of emissions. Grazing Jersey cows can voluntarily visit the GreenFeed system throughout the study.

In addition, Brito is teaming up with Alexandra Contosta, research assistant professor with the UNH Earth Systems Research Center at the Institute for the Study of Earth, Oceans, and Space, to use mathematical models such as the Northeast Dairy Emissions Estimator developed at UNH to evaluate pasture performance and carbon and nitrogen cycling.

“Incorporating changes in feed composition has downstream consequences for pasture performance. This includes not only grass nutritional quality and growth rates but also the rates of loss of carbon and nitrogen resources to the atmosphere in the form of greenhouse gases. Mathematical models such as the Northeast Dairy Emissions Estimator model are often used by researchers and the industry to evaluate pasture performance and carbon and nitrogen cycling,” Brito said.

Cows participating in the seaweed trials will be housed on the same pastures where scientists will measure soil nitrogen losses, grass abundance, botanical composition, and rates of grass consumption. The feed and milk production information will be then added to the Northeast Dairy Emissions Estimator model, allowing farmers to assess milk production, soil performance, and emissions when considering algae feed additives and fertilizers for pasture management.

“Through ongoing work with our partners at Wolfe’s Neck Center, we have identified several key gaps in the understanding of soil carbon change and nitrogen loss pathways that are precluding the optimization of simulation models. This includes a need to better understand the quantities and types of carbon and nitrogen that are deposited on a pasture via manure and how algae supplements may alter those values. Connecting seaweed feeds to pasture soil and biomass dynamics and milk production is vital to cost effectively manage of economic value and soil-based ecosystem services,” Contosta said.

Previous studies conducted at the UNH Organic Dairy Research Farm investigated the effect of kelp meal supplementation on milk yield, nutrient digestibility, animal health, and methane emissions during summer and winter. Scientists found that cows eating kelp meal produced less methane in July, but this response was not consistent throughout the grazing season, suggesting the need for additional research. They also found kelp meal improves the concentration of iodine in milk and decreases the stress hormone cortisol during winter and summer.

According to Brito, 59 percent of organic dairy farmers in New England fed kelp to their cattle. According to a 2015 study, organic dairy farmers in the Northeast feed kelp to improve body condition score and overall animal appearance. Farmers also reported decreased somatic cell count, reproductive issues, and cases of pinkeye in addition to reducing flies during summer grazing when cows had access to kelp.

“The knowledge generated by our project will have applications not only to pastured-based dairy farms, but also to confinement dairies and beef operations,” Brito said.

This material is based upon work supported by the NH Agricultural Experiment Station, through joint funding of the National Institute of Food and Agriculture, U.S. Department of Agriculture, under award number 1001855, and the state of New Hampshire.