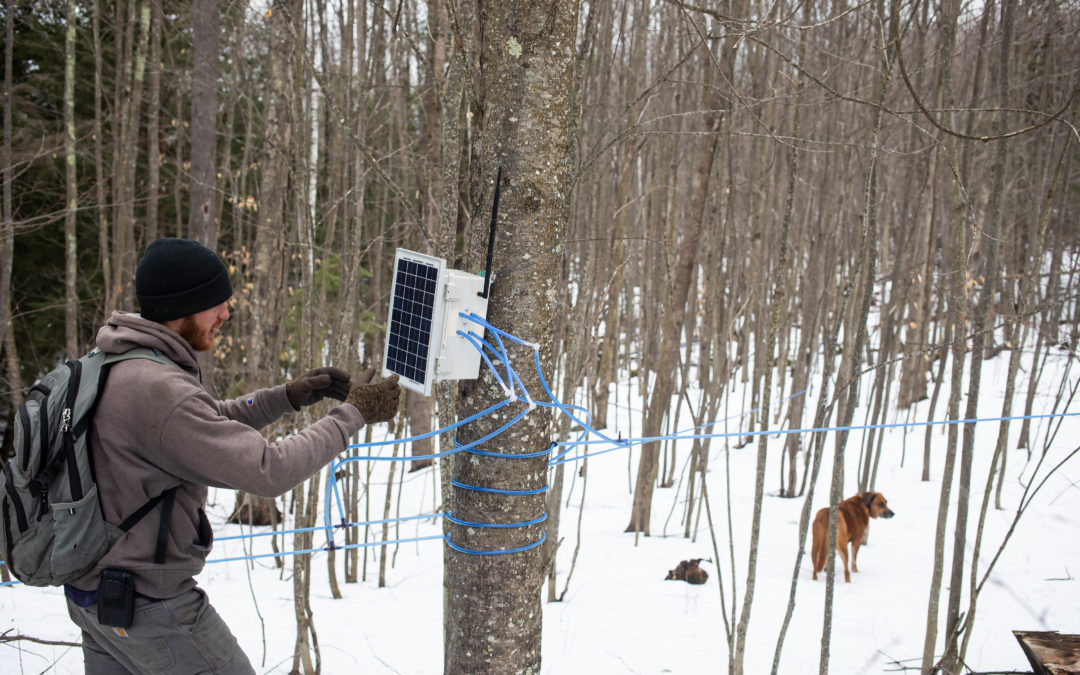 Jeff Moore checks one of the many solar-powered vacuum sensor stations out in the woods at the Windswept Maples Farm in Loudon. The radio-controlled device sends information on the vacuum strength of the tubing. That's Moe in the background. Photo: Geoff Forester, Concord Monitor

Climate change is scrambling the traditional process of gathering sap from sugar maple trees and boiling it down into that Nectar Of The Gods known as maple syrup.

Old-timers rarely started tapping trees until much before traditional town meeting day, the second Tuesday in March. Nowadays commercial operations draw a little sap during cold spells in December and definitely get going in January because they can no longer count on the season lasting long enough to wait. Once trees start to bud the sap changes and you can’t make syrup any more, and the increasing number of early warm spells are making trees bud earlier and earlier.

They’re also using more technology to increase production, including sucking out sap with vacuum and using remote sensing to minimize trudging through the woods looking for broken lines. The erratic patterns of freeze and ridiculous warmth that’s become winter norm means that it’s Mud Season all the time, so staying out of the woods as much as possible is the goal.

The Monitor will have a story about how they’re doing it at Windswept Maple Farm in Loudon. Its not written yet so I can’t point to it, but above is a teaser photo of Jeff Moore, part of the family farm. He’s checking a solar-powered sensor that measures vacuum pressure on scads of lines that go to a pump house, where it’s then pumped uphill to the sugar shack (you can’t choose your farm topography, alas).