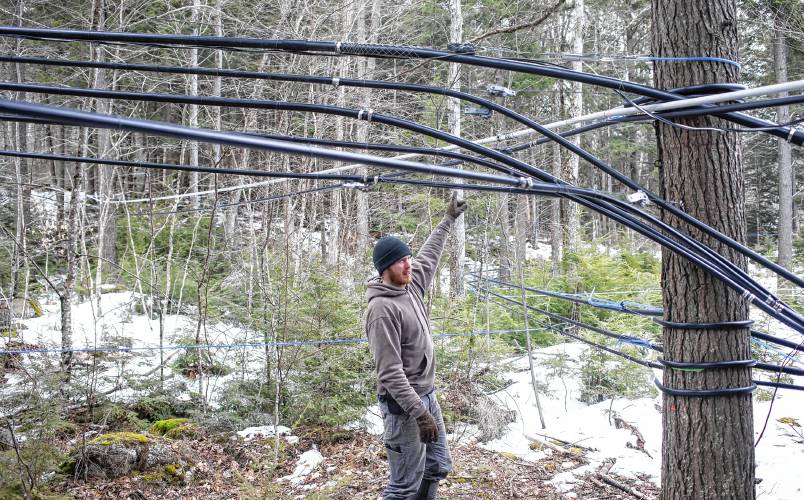 Maple sugaring is as traditional an activity as you can find, but for commercial operations, tradition is increasingly being replaced by technological improvements in a battle against modern climate obstacles.

“If you just wait until town meeting day, like they used to do, you’ll miss half the season. You can’t do that too many years or you’ll go under,” said Jeff Moore, whose family runs Windswept Maples farm in Loudon. “We’ve got to be ready, able to gather sap whenever it runs.”

Windswept, which has been a farm for eight generations stretching in various forms back to 1780, produces 6,000 to 10,000 gallons of sap in an average day when the season is running, which boils down to 100 to 200 gallons of syrup. Last year the farm made 3,500 gallons of syrup, which is about 2½ percent of the total production in the state, reported at 148,000 gallons by the U.S. Department of Agriculture

Like virtually all maple syrup producers, Windswept doesn’t collect sap in buckets hung on each tree but via blue plastic tubing that runs from to tree, gathering sap that runs to a pumping station. There it’s stored in a 1,500-gallon tank before being pumped to a sugar shack, where it gets boiled down to syrup. That last move is mostly uphill, unfortunately, because there’s a big dip in the middle of Windswept Farm, but Moore notes that you can’t change topography.

“We can’t control the weather, so vacuum is the biggest thing. It lets us take as big a piece of pie as we can in that time frame, with the least amount of stress on the trees as we can,” Moore said.

A quick primer on sugaring, courtesy of Moore: Sap moves in trees when it’s below freezing at night and above freezing in the day because water, which makes up most of tree sap, expands when it freezes. As it warms up it shrinks, creates internal pressure in the tree, which pushes sap through the xylem, the tree equivalent of blood vessels.

Drilling a hole in the trunk lets the sap leak out. Except it doesn’t just leak from trees in a working sugarbush; it’s drawn out by vacuum pumps that lower the pressure inside the plastic tubing, compensating for less internal tree pressure, as a less predictable freeze-thaw cycle becomes more common.

“With the changing climate, there’s much more inconsistency,” said Moore. “Vacuum lets us get almost twice the production during a season. We can pull more sap when the sap is running, and it lets us gather sap when there are less-than-ideal conditions for sap to flow naturally.”

A side benefit of good vacuum: Fewer holes bored into any given tree for fewer taps, which speeds things up for workers and reduces stress on trees.

“We’re generally using a single tap” in a tree, “with shallower holes, smaller in diameter. But we’re getting the same if not more sap.”

Maximizing production when sap is running is important because spring is arriving earlier each year. When buds start to appear on maple trees the chemistry of sap changes and you can’t make syrup with it, even if you get the right kind of weather.

The newest technological trend at play at Windswept Farm is remote sensing, often powered by solar panels. Computerized monitors hooked to piping throughout the woods lets them know when there’s a drop in pressure, which is often caused by the bane of syrup farms: Falling branches that break lines.

“Instead of us having to go physically look at something to determine if there is an issue or not .. then try to isolate which side of the woods it is, then go up that side and isolate which line it is … You can be at the sugarhouse doing something and see an issue come up. It will tell you exactly where it will be, you can drive directly to it, find it quickly, then go back to what you were doing,” said Moore. “We don’t need to be out here every day, we’ll go do other stuff, take care of land, make syrup, do forest management, until there’s an issue, and we can go out and fix it. Much more efficient.”

Going into the woods less often is good for the woods because erratic winters mean that it’s mud season much of the time. The less you need to churn up the ground, the better.

Moore said the changing climate, which he noted is due at least in part to all the greenhouse gases humans continue to pump into the atmosphere, has caused many other problems. He’s been cutting down dead ash trees killed by the invasive emerald ash borer that is devastating the species throughout the continent, and is struggling to control invasive plants like Japanese barberry that were once held back by long hard winters.