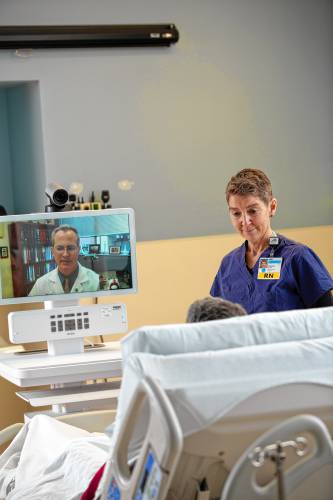 Keith McAvoy, Medical Director TeleNeurology, is shown on the screen of a mobile telehealth cart interacting with a nurse and patient at another hospital (names not available). Dartmouth-Hitchcock Medical Center—Courtesy

I wrote about (but didn’t visit – such is reporting in the COVID era, sigh) the telemedicine hub at Dartmouth-Hitchcock Medical Center in the Monitor. Telemedicine was going to be the topic of this week’s Science Cafe, so I turned it into a story instead.

The hub is bigger and more complex than I realized – not just video/audio consultations over laptops but hardwired connections to emergency rooms around the region. Just push a button on the wall and the 24/7 staffed center specialists can see, hear, talk to and get instrument feedback from the patient and staff in the room.

They’ve also put out 30-some-odd telepresence “robots” – self-propelled rolling carts with video/audio connections and some hardwired devices like stethoscope and otoscope (the thing that looks in your ear) which the staff can use on a patient, sending the result directly to the specialist. They don’t need staff to roll around and talk with patients or look at monitors.

The story is here.