Ticks are still here (but maybe carrying just one disease!) 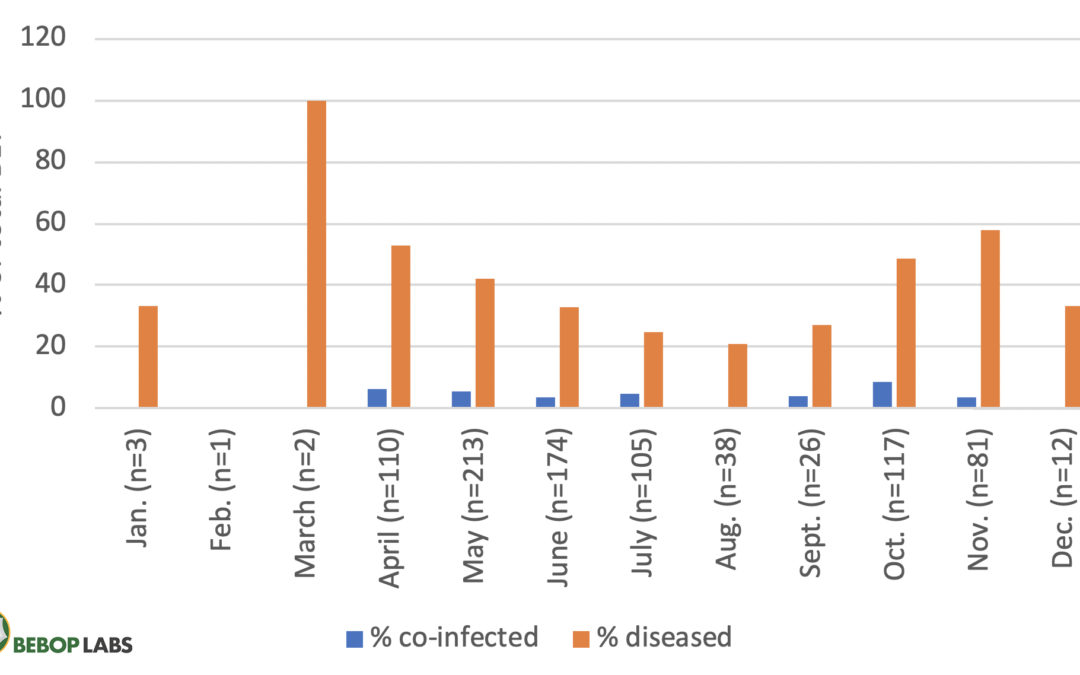 Very few of the ticks tested had more than one disease at any time of year. Chart by BeBop Labs

Before you get too depressed, there’s a little bit of good news. The second year of volunteer data collection provides some evidence that most black-legged ticks who are carrying any disease are not carrying more than one. This reduces worry about “co-infection,” at least for now. Also, most dog ticks here aren’t carrying any disease that affects humans.

Those conclusions come from two years of work analyzing ticks sent in by roughly 10,000 volunteers under a project known as BeBop Labs, started and run by Kaitlyn Morse in Plymouth, a Ph.D. who wanted to plug a hole about tick data north of Concord but now has results from all over the state.

In 2019, 1,341 black-legged ticks were collected by volunteers and analyzed by BeBop labs. Of those, 357 were carrying some disease, almost always Lyme. That’s only one-quarter of the total, which I found surprisingly low, although the percentage was about 40% in Hillsborough and Rockingham counties. The data from 2018 had infection rates closer to 40% in much of the state, which basically means you should assume all black-legged ticks are carrying something nasty.

Encouragingly, only 44 ticks in 2019 carried more than one disease, such as anaplasmosis or babesiosis. Multiple infections are one the reason that curing Lyme can prove so elusive.

Morse and collaborators have gathered lots of this data together, including an interactive map showing where samples were collected. It’s online at www.bebop-labs.com/mapping-ticks.

Morse, who is also an affiliated faculty at Plymouth State University, cautioned that these results are preliminary because the program has only been running two years. “I need one more data point – statistics are best in threes, not in twos,” she said.

Certain other conclusions, such as the distribution of black-legged vs. dog ticks by altitude, are particularly iffy at this point because there’s insufficient data to separate them from other variables such as distribution by north-south latitude, she said. But they can provide some guidance for future studies.

As I’ve noted here before, Morse started this data-collection project two years ago, calling it BeBop Labs after her chocolate Labrador retriever. It started slowly but has taken off.

“In 2019 our program went crazy,” said Morse. “We had five times the amount we collected in 2018. And not only did we get more ticks, we got more data with every tick: the date and location but also activity – if was biting, where, age of person bitten, pet or person.”

The boost came about partly because New Hampshire Camps partnered with BeBop Labs, collecting ticks as part of science projects at summer camps.

Donations have increased, too, to the point that she didn’t have to pay for some of the testing – done by a company called Ticknology in Colorado – out of pocket. UNH Cooperative Extensions hired a paid intern and Morse was able to pay a student from PSU to help, but she’s still unpaid.

Data about distribution of ticks, both geographic and temporal, and the diseases they carry is a perfect topic for citizen science because it needs more samples than paid researchers or lowly grad school grunts can collect.

And people are motivated to participate because we all hate how ticks have complicated the outdoor experience. Personally, I haven’t worn shorts outdoors since 2012 and it’s not because of knobby knees; permethrin-infused long pants are my hiking attire of choice, tucked into socks if we’re in fields or tall grass.

Some other conclusions from BeBop labs data so far include confirmation of other studies that black-legged tick numbers peak in April and May as they emerge from winter and again in October and November as they prepare for winter. Not surprisingly, there are corresponding spring and fall spikes in reports of tick-borne diseases, too.

Despite all this fine-grained data, Morse admits that for most of the state you should assume the worst, tick-wise.

“It’s better to be safe than sorry. Assuming that there are ticks when you go out is not a bad thing,” she said.