Truck traffic is back. Cars? Not so much. 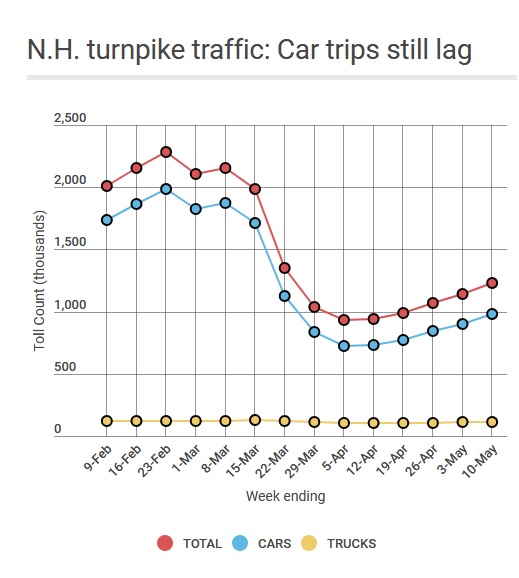 Truck traffic has returned to New Hampshire’s turnpike system but car traffic is still only half of its pre-COVID level, reflecting the fact that far fewer people are commuting to work.

A total of 1.23 million trips by cars and trucks were made through the state’s E-ZPass system in the week ending May 10, according to the state Department of Transportation. That’s about 25% higher than the low point seen in the first week of April, when just 933,000 trips were reported, and represents the fifth week in a row that the number has increased.

However, the total is still 1 million trips below the level in February and March due to the fact that car trips have not recovered. Trips by cars totaled 977,000 last week, half of the 1.9 million trips that were recorded during most weeks of February.

Truck trips, on the other hand, are back to earlier levels, with 116,000 trips last week, almost exactly the number reported in most weeks of February and early March. They never declined as much as car trips; the lowest number of truck trips was 102,000 i mid-April.