Getting sticks pushed up your nose is no longer unusual 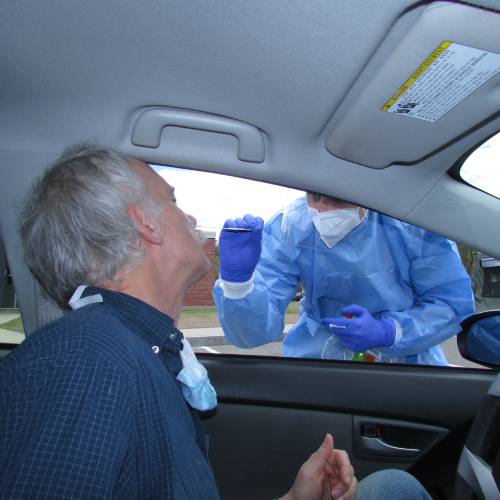 I'll always remember 2020 as the year I allowed strangers to shove a stick up my nose, and was glad of it.

When I drove up to the Milford Armory recently to get my free COVID-19 test, the National Guard solider at the gate explained the procedure this way: “It’s just like Dunkin’ Donuts.”

He meant that I should stay in my car and the medic would come to me, but I’ve got news for him. Unless corporate branding has gone badly astray, getting a COVID test is not at all like Dunkin’ Donuts.

What happened to me, as happens to more than 1,000 people every day around New Hampshire, is that a medic shoved a big stick up my left nostril, counted to five at a glacial pace, then did it again in the right nostril. It wasn’t exactly painful but my tear ducts were activated: Even the worst cup of Dunks is more fun.

Geoff Forester, the Monitor’s photo editor, also had a test done. He put it this way: “I heard that the testers know they have not gone far enough up (the nose) if the patient doesn’t tear up. The five seconds seems to last forever.”

Geoff and I got tested for free because we fit the demographic profile – a nice way of saying that we’re kind of old. It’s also free if you have certain underlying conditions; otherwise, your insurance company (or you) might get billed.

We wanted to see how the state’s testing program is going since testing is, as you’ve heard a million times, a key to coping with COVID-19. Society can’t figure out how to react to this infectious disease if we don’t know where it is, who is getting it, and how things are progressing. That takes lots of testing.

Our tests were PCR tests, so called because they use polymerase chain reaction to multiply genetic material a million-fold, allowing identification of any DNA from the coronavirus.

PCR is an awesome technology whose invention, which won the 1993 Nobel Prize in chemistry, turned an interesting technology into a worldwide phenomenon. But PCR can also multiply impurities a million-fold, so gathering samples for COVID-19 tests must be done very carefully. It requires specialized containers and collection wands and specific reagents, among other things.

Shortages of those collection materials are a big reason why the U.S. has been so slow to do enough testing. If the administration hadn’t been hiding from the truth we would have been stockpiling material ever since China, which also tried to hide the truth, finally acknowledged the virus at the start of the year. Our delay was shameful, and we’re still catching up.

My test was analyzed by Quest Diagnostics, one of the lab companies that the state has contracted with.

Geoff and I did not get an antibody test, which in theory can detect whether we’ve ever had the disease. Antibodies specific to the coronavirus are produced by the immune system when you get infected but they hang around after you’re cured, ready to defend you if the virus comes back.

New Hampshire has only just started rolling out antibody tests, another important tool in shaping our response to COVID-19. They’re one of the ways we’ll know if so-called herd immunity is possible, which would allow more relaxation of the rules that are making life so annoying.

For his test, Geoff went to old DOT headquarters on Stickney Avenue in Concord. Both that site and the Armory were staffed by personnel from the National Guard, an organization that has become the face of the state’s COVID-19 response for people who don’t go to hospitals.

Another National Guard soldier, working in leased space in the Grappone Center in Concord, called me five days later and let me know my test was negative. Geoff’s result was also negative.

I signed up for my test online via the state’s portal at NH.gov/covid19. The process is quick and easy; I asked for a test on Thursday but they were full, so it was scheduled on Saturday.

However, we’re talking about computers and the internet, so the process isn’t always easy. As I write this, the site is down: Try to open the form and you get “Error establishing a database connection.” As for Geoff, he never heard back from his online application.

Geoff was able to apply for a test as a walk-in at the Concord site when he showed up to take pictures for the Monitor. The paperwork took a couple minutes to fill out and the wait was also just a few minutes, he said.

The state has set up seven of these testing sites, in Claremont, Lancaster, Plymouth, Rochester and Tamworth as well as Concord and Milford. They average about 61 tests per day, with 12 no-shows and 5 walk-ins each, according to DHHS spokesman Jake Leon. Each is staffed by up to a dozen National Guard soldiers or airmen, although sometimes that includes mobile testing for staff at a particular health care facility.

All in all, it was relatively seamless and an important part of our response to this pandemic. And with any luck, the experience will soon be old-fashioned.

A variety of new test options for detecting COVID-19 are being rolled out. The most significant is a test just approved by the FDA which uses samples of your spit, instead of mucus from deep inside your skull. That will allow accurate samples to be taken at home and mailed to testing sites.

That will free up the National Guard and the spitting will end comparisons to Dunkin’ Donuts – unless you’re a Starbucks fan, that is.