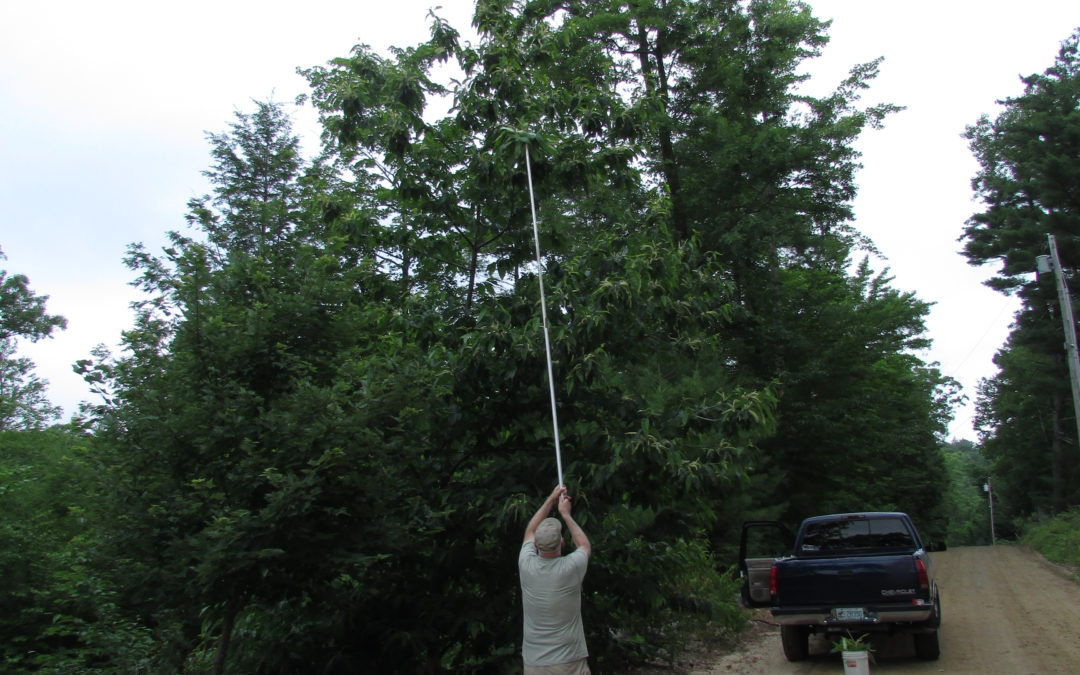 A long-running attempt to resurrect the American chestnut tree from the blight that virtually exterminated it – an attempt that can be seen in a Plymouth “germplasm conservation orchard” among other places – is now running on two tracks, one with traditional cross-breeding and one with genetic modification.

“We’ll be harvesting nuts in late September. Hopefully we’re going to have hundreds if not thousands,” said Thomas Klak, a professor at the University of New England in Maine who is about to send modified chestnut tree genes into the wild. “The weird weather has not helped us. Flower development on chestnut trees has been relatively slow this year.”

At UNE, Klak has built a lab that uses high-intensity light and fertilizers to bring trees to sexual maturity in six months as compared to a few years, speeding up cross-breeding efforts.

Recently his lab has used this process to grow trees developed at the State University of New York that contain a gene common in grasses which neutralizes the fungal toxin, rendering the blight harmless. This month he will perform the first cross-pollination between these genetically modified trees and American chestnut trees in the wild, having obtained permission from the U.S. Department of Agriculture.

If all goes as expected, Klak said, “Half of the offspring won’t die from the fungal blight” and there will be renewed hope of returning the American chestnut to our forests.

“We’ve got a long way to go. There are four billion trees to bring back,” he said.

From Georgia to Maine

The chestnut was one of the giants of Eastern forests, so prevalent that foresters joked a squirrel could travel from Georgia to Maine without leaving the chestnut canopy. It was valued both for its wood and for its bounty of nuts that were a major source of wildlife food.

Around 1904, however, a bark fungus was carried here on Chinese chestnut trees and within a few decades it had exterminated the native species. The only American chestnut trees around now are sprouts from stumps that occasionally live long enough to produce flowers and nuts for a year or two before dying.

For decades the American Chestnut Federation has been hunting down these natural remnants to mix their pollen with the flowers of Chinese chestnut trees, which resist the blight but don’t have the beauty and heft of the American species. These cross-bred trees have been grown in orchards around the country and bred back and forth with other American chestnuts or Chinese chestnuts or with each other.

The orchard in Plymouth has only pure American chestnuts that were cross-bred with each other, preserving the “germplasm” of the native species so it can be added to any resistant strain that gets created.

This has gone on for more than six generations in hopes that genes for resistance will be transferred via germplasm, or the heritable DNA, to a tree that looks and grows like the American chestnut.

Earlier this month I saw this process in action when Curt Laffin of Hudson came to my town to pollinate a chestnut tree that my wife had spotted. It probably won’t last much longer because it has a big ugly canker, a sure sign of the blight, but for the moment it’s a handsome, 30-foot tree full of green leaves and long, hanging flowers.

Laffin, a wildlife biologist and American Chestnut Foundation member who I’ve interviewed several times over the years, brought male flowers from two surviving chestnut trees in Merrimack and spent a half-hour shaking them next to female flowers on our tree. Part of the work was done with an extendable pole that he designed. Then he cut off some male flowers that he’ll take back to Merrimack to do the same there.

“We collect as much DNA from wild trees as we can,” he said.

He’ll put small bags over the flowers so they won’t be pollinated by anything else, then later will collect the nuts. They’ll be planted and the resulting trees added to the cross-breeding mix at orchards throughout the Vermont-New Hampshire chapter of the American Chestnut Foundation, increasing the genetic diversity of this long-running effort.

It takes a couple of years to grow a mature tree and more years to see if the tree can resist the blight that’s present in the environment before deciding which individuals to use for the next generation, so this has been a slow, laborious process.

And it’s beginning to look like a process that won’t succeed.

“Originally they thought that it took three or four genes from Chinese chestnut to provide resistance. Now we know dozens of genes are needed,” Laffin said. The possibility of transferring that many genes via the random mixing of cross-breeding is beginning to seem very unlikely.

Enter genetic modification, which can pick and choose among the genes that get transferred.

Scientists at SUNY’s College of Environmental Science and Forestry were able to insert a gene that lets a plant create an enzyme called oxalate oxidase, written as OxO. The enzyme neutralizes the acid produced by the fungus, which is what destroys the chestnut tree’s cells and kills it.

Klak said OxO is a good candidate for genetic transfer because it exists naturally in many different plants, from azaleas to bananas – the one used at SUNY-ESF came from wheat. Klak said there’s hardly a person in the U.S. who hasn’t eaten something which contains the gene already.

Just as importantly, Klak said OxO won’t push the chestnut tree blight into evolving resistant strains because it doesn’t alter the fungal life cycle, but merely neutralizes a side effect.

“The blight can function and live well. It doesn’t kill the blight, just makes the chestnut tree tolerate it,” said Klak.

The resulting tree is normal in all other ways, he said: “Dozens of studies have been done to document that transferring it creates a tree that is just like the wild chestnut except it won’t die from blight.”

That isn’t any solace to opponents, who are opposed to the project because of concerns about the unintended consequences of genetic modification, particularly when it transfers a gene from a species that would not naturally cross-breed with the host.

Once a gene becomes released in the wild it is almost impossible to contain it. That’s especially true if the gene jumps to other species, which has happened with some genes inserted into domestic crops, where it might cause a different and unwelcome response.

There is also a concern from opponents that the chestnut program will be used as a sort of biotech Trojan horse. If creating a GMO chestnut helps bring back a beloved and valuable species, it might become a poster boy for other GMO trees and then genetic modification of other wild species, they fear.

As might be expected, Klak thinks these concerns are misplaced.

“This doesn’t open up a Pandora’s box,” he said. “It doesn’t affect other attempts to bring genetically engineered plants into deregulation. They have to go through the same process … go through a very rigorous scientific process to ensure there are no dangers of releasing the transgenic species.”

As for Laffin and the American Chestnut Federation, they will continue with the decades-old program of crossing Chinese and American chestnuts in hopes that nature will create the solution.

The New Hampshire-Vermont chapter of the ACF is one of 16 around the country. Each is supposed to provide 35 trees that can be fertilized with pollen from the transgenic tree, which is a clone – my town’s tree and the Merrimack tree will be part of that. The idea is to create a diverse population with traits developed from growing in different parts of the Eastern seaboard, each carrying the OxO gene.

“This is a pretty vigorous tree,” he commented as he loaded his pickup. “We’ll have to see how it goes.”