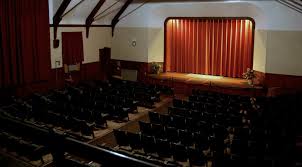 Wilton Town Hall Theatre's main screening room, as seen from the balcony (which is closed because audience heads can block the projector). This used to be the town's gathering place for plays, town meeting, and even basketball games.

I have a feeling that a large percentage of my readers like old-time silent films, especially comedies. There’s something about that pre-digital era that appeals to geek fans, as “steampunk” demonstrates.

So let me make a pitch for my local indie movie house, the Wilton Town Hall Theater. It is quite literally in the town hall of Wilton, N.H. Movies have been shown there for a century and vaudeville acts came by, too. It’s big and comfortable – the seats are so far apart I can stretch out to fill length – with a good screen and sound. It has superb popcorn, too. I’ve probably seen 200 films there over the years.

It’s struggling right now, partly because nobody is releasing new art-house films. So it’s going to the silents, as this press release describes:

In August, it forsaking first-run movies for an entire week of 1920s silent comedies, all screened with live music.

Markaverich reopened his two-screen theater in early July after being closed nearly four months due to Covid-19 stay-at-home orders.

The theater made every effort to comply with Covid-19 public safety guidelines: attendance was limited to half-capacity, face coverings were required, social distancing was enforced, and show times were staggered to keep people from congregating in the lobby and to enable thorough cleaning between screenings.

But audiences didn’t come. On many weeknights, not one person showed up for the evening shows. The one big summer hit Markaverich was hoping to book, ‘Hamilton,’ was released via streaming over the 4th of July weekend, bypassing movie theaters entirely.

“We’ve been ready to go, but we can’t run a movie theater without movies,” Markaverich said.

With few new releases in the pipeline, and with audiences reluctant to attend, Markaverich decided to pull the plug on first-run movies in late July.

“I hope we’ll be back to showing first-run features after Labor Day,” Markaverich said. “In the meantime, it says a lot about the state of Hollywood’s output, and the lack of support for independent cinemas, that we have to turn to century-old comedies to keep from going dark or closing for good.”

For more information, call (603) 654-3456 or visit www.wiltontownhalltheatre.com. For more about the music, visit www.jeffrapsis.com.