New COVID cases aren’t increasing but they’re not decreasing, either 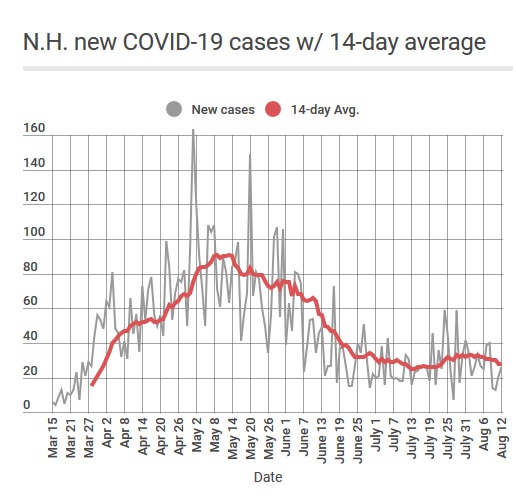 When it comes to driving safely there are two important factors to consider: How fast you’re going and how fast you’re accelerating.

It’s the same with COVID-19 caseloads. The total number of new daily cases in the state is the pandemic’s speed, so to speak, and how fast the number is changing is the acceleration. Both matter.

Happily for us the pandemic’s “speed” has been low since June and the “acceleration” negative, meaning the caseload was getting smaller, which is why the Monitor’s weekly COVID tracker was optimistic in late July.

But recently the acceleration swung back into the positive as the two-week average number of new cases crept up from mid-20s to mid-30s. Even though that new-case figure remained below our threshold of concern – our “speed” is still low – the fact that it was growing caused the tracker to backtrack for the first time on our judgment of the pandemic’s status.

Over the past week, that acceleration has ended but the number of daily new cases remains higher than it was a month ago. So the increase in new cases wasn’t a blip that goes up and down, it’s proving to be a mesa that goes up and stays there.

With the opening of many schools and colleges just a few weeks away, that’s worrisome.

Have we met this goal? No.

As noted above, the two-week average of new cases has been stagnant at around 34 since the start of the month. It is not dropping.

Have we met this goal? Yes, easily.

More than 2,000 test results were reported most days recently and the average is 2,144 per day. The number of people tested is much less because of multiple tests to individuals working in health care.

The positive rate has been around 3% as measured by the Department of Health and Human Services for more than two months.

I update three charts each weekday on the virus in New Hampshire: New cases, new hospitalizations and total deaths.