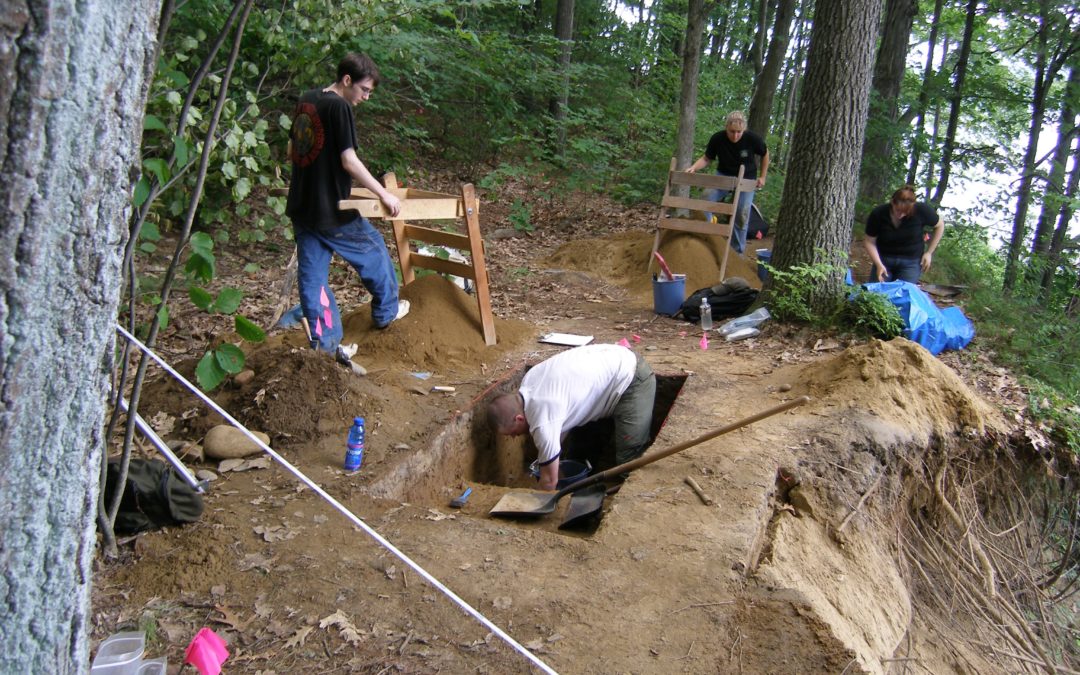 The 2004/5 dig on Wantastiquet Mountain, showing how close it was to falling into the Connecticut River.

It has always surprised me how many places in New Hampshire are named “rattlesnake.”

These names surprise me because we barely have any rattlesnakes. It’s as if Arizona had a bunch of locations called “lobster.”

Our only native rattlesnake is the timber rattler, a shy species categorized as critically imperiled. So few of them exist here that state biologists keep the location of any dens secret to protect them from collectors.

But it turns out that this was not always the case, as I learned from Robert Goodby, a professor at Franklin Pierce University who led two summers of fieldwork at a pre-Contact site along the Connecticut River, west of Keene, that had been occupied seasonally for thousands of years.

Goodby, a professor of anthropology at FPU, says they found something else amid the pottery, stone tools and other items typical of Abenaki sites at this site, which was excavated more than a decade ago. The site on Wantastiquet Mountain overlooked the river and had long been eroding away because of changes caused by the Vernon Dam. Most of it had already fallen into the river, Goodby says, which complicates analysis; it has since entirely washed away.

“We started noticing pretty soon that we were finding a fair number of burnt bone fragments. There were the usual bones – turtle, deer – but there were also these small vertebrae,” said Goodby. After consultation with a zoologist and herpetologist, they were pegged as snake backbones, lots of snake backbones.

“After counting vertebrae there was one water snake, one garter snake, some black rat snakes, one northern copperhead – rare in this part of New England – and the remaining 20 were timber rattlesnakes,” he said.

All the bones had been burnt, which is why they were preserved so well, so the question is: What was going on?

Some of the snakes were probably cooked for food, says Goodby, but the paper will describe evidence that some, particularly the venomous snakes, was used for ritual activities.

“There is enough evidence rattlesnakes were used in rituals elsewhere … that it fits,” he said.

In fact, Goodby says, the snakes may have attracted the Abenaki to the area.

“If you look at the historic records, newspapers in late 1800s describe rattlensakes being hunted commercially on Wantastiquet because there are so many of them,” he said. “If you’re thinking of them as sacred animals, sacred food, that would make sense why they (Abenaki) were here.”

Three of the species – rattler, copperhead, rat snake – they den together in the winter. They fall into the same cavities and hang out in a big pile,” Goodby said. “That’s evidence that this was a warm weather site, maybe they’d arrive in spring when (the snakes) were coming out, leave in fall, when they were going back in.”

Like many modern New Hampshire residents I have only the vaguest idea of who lived here before Europeans. Aside from a couple places like the Amoskeag Falls, I don’t know of any pre-Contact sites.

Goodby says the Wantastiquet site was valuable for anthropologists because, like Amoskeag, it had “good stratigraphy.”

“You could excavate down through layers and see what has changed. Usually it all has been compressed into the top 30, 40 centimeters of soil. Stratigraphy is really important,” he said.

The most recent material found from about 600 to 700 years ago, and the oldest was perhaps 6,000 years ago. Glaciers retreated from here about 15,000 years ago but massive meltwater lakes were formed as they retreated, trapped by ice or glacial debris, and lasted centuries or millennia before draining out and forming the Connecticut River Valley.

Goodby says the two FPU field sessions collected about eight boxes of material. It is stored at the university in Rindge and will eventually be moved to the Division of Historical Resources in Concord, since the site was on state-owned land. There it can add to our slim but growing understanding of how people lived in New Hampshire long before it was New Hampshire.

“What we found at the site offers new evidence linking snakes to their spiritual world, and it gives us a better sense of their worldview,” he said.