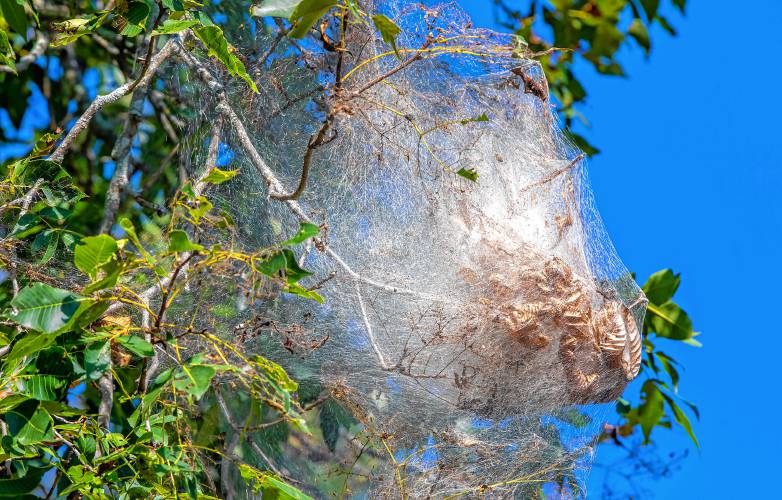 So many bad things are happening in the environment that the sight of what looks like huge balls of cotton candy all over some trees feels like the latest new disaster.

But don’t fret: They’re routine and not as bad as they look.

These aren’t gypsy moths or tent caterpillars, both of which can kill trees. These are fall webworms, whose nest are ugly but almost never a real problem. There’s certainly no need to spend money on pesticides, which probably wouldn’t penetrate the webs even if you tried.

“Don’t panic” is the succinct advice from UNH Cooperative Extension in its online page about fall webworms. It explains that these are moth caterpillars, part of a complicated lifecycle.

The moths hatch in mid- to late-July and the larvae crawl up the tree and eat leaves for a while inside a silky home they weave to protect themselves, then make a cocoon and spend the winter as pupae in the soil. In early summer the moths emerge, find a mate and lay eggs, which hatch soon afterward and start the cycle over again.

The best bet if you hate the sight of the webs is to pull them down with a rake or a pole. Even better, says Co-op Extension: “Treat yourself to a hot cup of coffee and let birds, insect predators and internal parasites keep fall webworms in check,” although poking a couple of holes in a web can help those predators get in.

No action is really needed because, despite an alarming appearance, the webs do little harm. Webworms appear late in summer, after trees have already stored much of the energy they need for winter and they are native to the area so that our forests have learned to live with them.

The only danger can come if they blanket most of a tree, which occasionally happens with cherry trees (webworms’ favorite).

It’s hard to know whether webworms are worse or better than usual in the Concord area this year. Nobody keeps track of them because they don’t do much damage, so reports are anecdotal.

So you can stop worrying about webworms and go back to worrying about disease-bearing ticks, garden-attacking grasshoppers (which are more active at the moment, thanks to our drought) and invasive beetles killing all the ash trees.