What’s hard about studying a White Mountain butterfly? Pretty much everything. 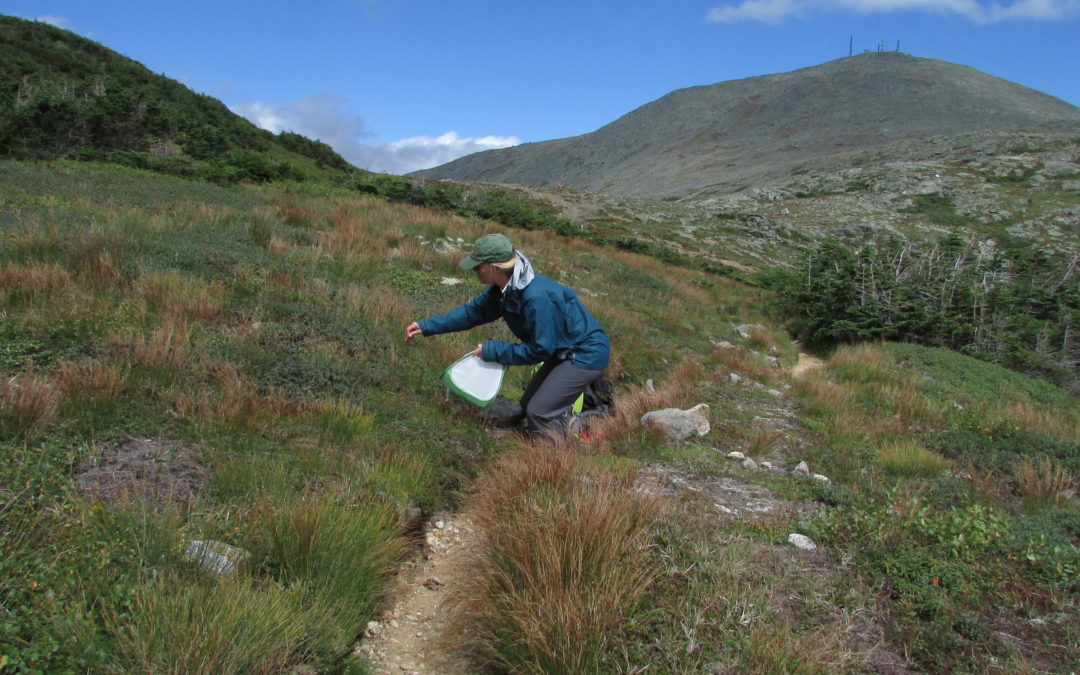 When first described to me, it sounded like a simple task: Figure out how to protect a butterfly that lives only on the Presidential Range.

Nothing’s simple in wildlife biology, especially when you’re dealing with a tiny creature – the caterpillars are so small I couldn’t find one even when biologists pointed right at it – living in a fragile ecosystem that limits research activity, and you’re starting from scratch.

And I do mean starting from scratch.

“The first year, we didn’t know how to tell male from female,” said Heidi Holman, a wildlife biologist with New Hampshire Fish and Game who is leading the study of the White Mountain fritillary.

This orange-and-black butterfly, about the size of a half dollar with a wing pattern that Holman said reminders her of “1970s zig-zag pattern,” lives only on scattered vegetation patches between Mount Eisenhower and Mount Madison. Microclimates cause snow to linger longer in these spots, supporting a different mix of plants than nearby.

We don’t know how many fritillaries there are; we don’t know if the population is growing, shrinking or moving; and while we know climate change is altering snow communities we don’t know how this will affect the butterflies, or what changes, if any, are happening to its predators or food supply.

“We don’t know enough to even generate hypotheses. That’s why basic studies like this are crucial,” said Steven Fuller, a conservation biologist with the U.S. Fish and Wildlife Service, which is supporting N.H. Fish and Game’s work.

The question is whether the White Mountain fritillary, already a state priority species, should be added to the federal list of endangered species. Efforts to make that decision began in 2017, building on research done several years earlier, and are slated to finish by 2027. That may not be enough time.

Case in point: After three years, biologists still haven’t been able to determine the host plant for the caterpillars, which is needed to raise a colony in labs for study. (The White Mountain fritillary’s lifespan is far more caterpillar than butterfly: two years crawling vs. less than two months flying.)

Tests with plants that caterpillars have been seen on in the wild – alpine bilberry, dwarf bilberry, mountain cranberry, bearberry willow and dwarf birch – have failed to sustain the population, for reasons that are unclear.

One possibility: “Some caterpillars avoid plants that are damaged. It might be a sign of predators or competition,” said Holman. Perhaps the problem is that Holman’s team is raising caterpillars on plant cuttings rather than potted living plants.

Testing that idea will require creating a miniature study greenhouse that will probably have to go in the Fish and Game lab near Concord Municipal Airport, since the project’s “laboratory” on Mount Washington is a single table in a basement storage room of the Sherman Adams Visitor Center.

Remember, all this is an attempt to find a way to keep a colony going so biologists can do things like analyze its genetics and test various strategies. This isn’t even really the first step in the scientific process; more like the preparation to begin the first step.

But nobody’s panicking. “We look 15 to 20 years out. If it takes 3 or 4 years to learn enough information about a species, that’s not a big deal,” said Fuller.

Back into the wild

Last Friday, Holman and Fuller released four female White Mountain fritillaries back into the wild, accompanied by a couple of huffing-and-puffing journalists.

Starting at the Adams Building at the top of the Mount Washington Auto Road, Holman put the butterflies into carrying cages and we scrambled down the ankle-twisting Tuckerman Ravine Trail to the lip of the ravine, where they released two of the fritillaries. Then we hiked over to Lakes of the Cloud AMC hut to release another, and then went around the back of Mount Monroe to release the final one.

This scattered dispersal was necessary to return each female to the room-sized patch of vegetation where Holman and her team had collected them a few weeks ago, much to the interest of local hikers.

“People notice where you go off-trail with a collecting net,” Holman commented. She said it’s not unusual for a full day of collecting to involve conversation with 100 people.

Going off trail is another reason this study isn’t moving faster. The alpine zone – the portion of the White Mountains that is above treeline and exposed to the winds and cold of “the world’s worst weather” – is incredibly fragile. So researchers can’t run around willy-nilly trying to find and catch butterflies, and they can’t put out markers or tape or cages and other materials common to wildlife studies.

The female butterflies had been gathered so their eggs could be collected for the latest effort in creating a viable study population. They have about 200 eggs, Holman said. This past winter, 17% of them survived, which is better than the winter before when none did.

Holman was careful to return the females to the same place they were collected because it’s possible the butterflies will lay more eggs before they die in the next week or two, and she didn’t want to mix up the genetics. This puzzled me until she explained:

Even though the total range of the butterfly is tiny, it might be the case that distinct sub-populations have developed on different mountains because they’re far enough apart. That’s one of the things later studies will determine, meaning the populations must be kept separate until then.

That’s surprising but it get more surprising: It’s possible there are different subpopulations separated not by geography but by whether the year ends in an even or an odd number.

Holman explained. Because the caterpillars live for two years before turning into butterflies to mate and lay eggs – from a functional standpoint, butterflies are nothing but flying sex organs – the species could have developed even-year and odd-year populations.

The White Mountain fritillary is an example of a cold-weather species left behind when the glaciers retreated at the end of the Ice Age some 15,000 years ago, leaving only a few places with the right sort of conditions. The aptly named White Mountain Arctic butterfly is another species in the same boat.

It’s no stretch to think that as the climate continues to get hotter and more erratic, species like these that depend on small, easily disturbed environments are in trouble. One of the long-range goals of Fish and Game’s work, in fact, is to see whether a captive population of the White Mountain fritillary could be establish to augment wild populations in the future, if that proves necessary.

For the time being, however, the goals are more modest.

“We want to understand them better,” said Holman. “That’s what we need to help them.”