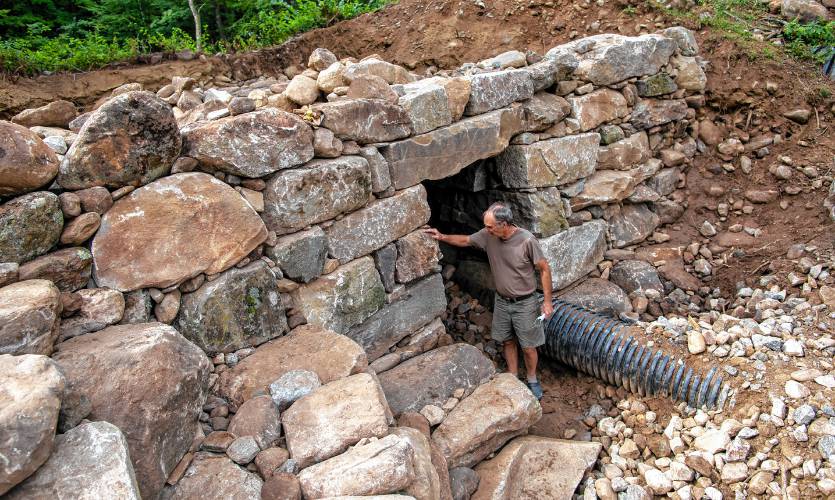 Replacing a crossing that carries a dirt road over an unnamed brook deep in the woods is no big deal, unless the crossing was originally built by the Shakers. Then it’s practically a work of art.

“We thought of doing a concrete culvert. That would be the easy thing, but this is on a preservation easement,” said Tim Meeh, whose property abuts Canterbury Shaker Village and shares the dirt road in question. “And besides: Look at it!”

Look at it, indeed. As originally built eight decades ago and as carefully reconstructed this summer, the 30-foot-long tunnel – calling it a culvert would be an insult – is a marvel of cut granite blocks and local stone.

The roof is made of multi-ton lintel stones as big as refrigerators, lined up in a row. A six-foot person can stand upright inside. It’s so wide at the entrance that a child couldn’t touch both walls at once. And it can easily support a 12-ton excavator used to smooth out the dirt road on top.

“An NRCS engineer came down. They made a rough drawing and said, we’ll count on Dennis and Kevin to do it right,” said Meeh, referring to the Natural Resources Conservation Service. “They’ve been down a few times and liked what they’ve seen.”

That would be Dennis Moore of Moore Construction – he operates the excavator – and dry stone mason Kevin Fife, who grew up nearby and has done plenty of stone work around Canterbury Shaker Village. For three weeks they have been disassembling and then reassembling the crossing on the west side of Canterbury Village, replacing some broken stones and rebuilding it from the ground up.

“I bet we hand-placed 30 (or) 40 tons of rock” atop the lintels, Fife said. Despite that, he downplayed the task.

“We haven’t worked real long days,” commented Fife during a recent visit to the worksite. “We’re getting old!” added Meeh.

The crossing dates back at least to the 1820s when a small wooden bridge was built to carry wagons over a creek that runs between a marsh on Meeh’s property and small rapids on the Shakers’ land. Remnants of the abutments of that bridge, perhaps 10 feet lower than the current crossing, were found during this summer’s work.

Meeh said the Shakers built a small mill on the rapids that operated as a sawmill and a grist mill, and probably built the stone crossing in conjunction. Fife can date some of the blocks by the shapes left behind from the drill or wedge that was used to break them.

“There was not enough torque to turn the stone. They tried a mortar and pestle arrangement with a cannonball,” he said, but that wasn’t successful and the mill was abandoned.

The stone bridge, which leads to some of Meeh’s hayfields, collapsed during high water two years ago after decades of slow erosion and undercutting.

Replacing it began by taking out many of the stones and spreading them out so that Fife could decide what needed replacing and how to put it all back together again, like a massive 3-D jigsaw puzzle.

“I’d look at them, and say ‘this is going to be a diverter, this is a backer, this is a corner,’ ” Fife said. The calculations include the knowledge that granite, while solid and heavy (160 pounds per cubic foot), is surprisingly brittle.

“I do a lot of chinking. You want all your stones to touch on several points as much as possible, to even out the (stress),” Fife said, pointing to scores of small and mid-sized rocks wedged in the spaces between adjoining stones. “It’s important to get these good and tight so it can’t break. Granite has uniform grain size, so it doesn’t take much to snap it.”

Fife was able to retain most of the foundation and reuse most of the stones, although not always in the same way.

“This header stone, we spun it 180 degrees and it sat a lot better,” he said.

Fife often had to remove debris between stones that were left in place, much of it sticks cut by beavers who occasionally build dams here. “I’d reach in and hope there are no black snakes,” he commented.

While he did see an occasional snake, Fife is happy that he didn’t see something else. “There’s no poison ivy here!”