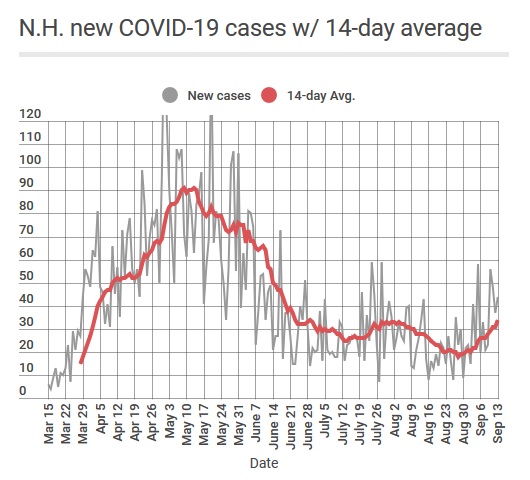 A scary number showed up Sunday on my tracking of the state’s COVID-19 status: 34.

It was scary because that was the two-week average of new cases and it was higher than the peak we saw during the mid-summer increase. We haven’t had an average that high since June 28.

The cause, of course, is outbreaks at colleges, in particular UNH, the state’s largest campus, and at public and private schools, notably an outbreak at Windham High School that scuttled plans for in-person classes at the last minute. Those numbers seem to say that the long-feared autumn resurgence in COVID-19 has begun.

The question now is how bad this will be. Cold weather will keep more of us indoors, making it easier to spread the virus. but if we stay vigilant then maybe things won’t get too bad.

New Hampshire has done very well controlling the virus this summer. In particular, the effort to test and control cases in long-term care facilities, where three-quarters of COVID-related deaths have occurred, has paid off. The state has seen only two COVID-related deaths in the past two weeks.

We had a small rise in new cases in June as businesses opened up but then numbers went back down even as people went to restaurants and beaches. If we can keep up our guard – masks, social distancing, being intelligent about gathering together; you know the routine – then we won’t have to shut back down.

For the moment, however, the Monitor’s weekly measure of the state of the virus in New Hampshire by looking at four goals is no longer totally positive.

Goal 1: A two-week drop in cases, showing that the virus is not spreading.

Have we met this goal? No.

Back on Aug. 30, the 14-day average of new cases had fallen to 19, the lowest since early in the pandemic. But two weeks later that average had risen by more than 50%, to 29 on Sept. 10. If that pattern continues we could see the sort of exponential rise that occurred in April.

Have we met this goal? Yes. Our number of new cases has been below this level for more than two months.

But if new case numbers keep rising like they have so far in September, we’ll miss this goal soon.

The average number of test results were reported each day was over 2,000 last week and frequently tops 3,000. With UNH launching its new testing lab these numbers should stay high – although since the UNH tests will be largely confined to the campus community, they won’t help us know if the virus is spreading throughout the state as a whole.

We need to keep testing all over the state for anybody who asks for it. That’s the only way we’ll know what’s actually going on.

I update three charts about the virus in New Hampshire each weekday: New cases,  new hospit alizations, and total deaths.