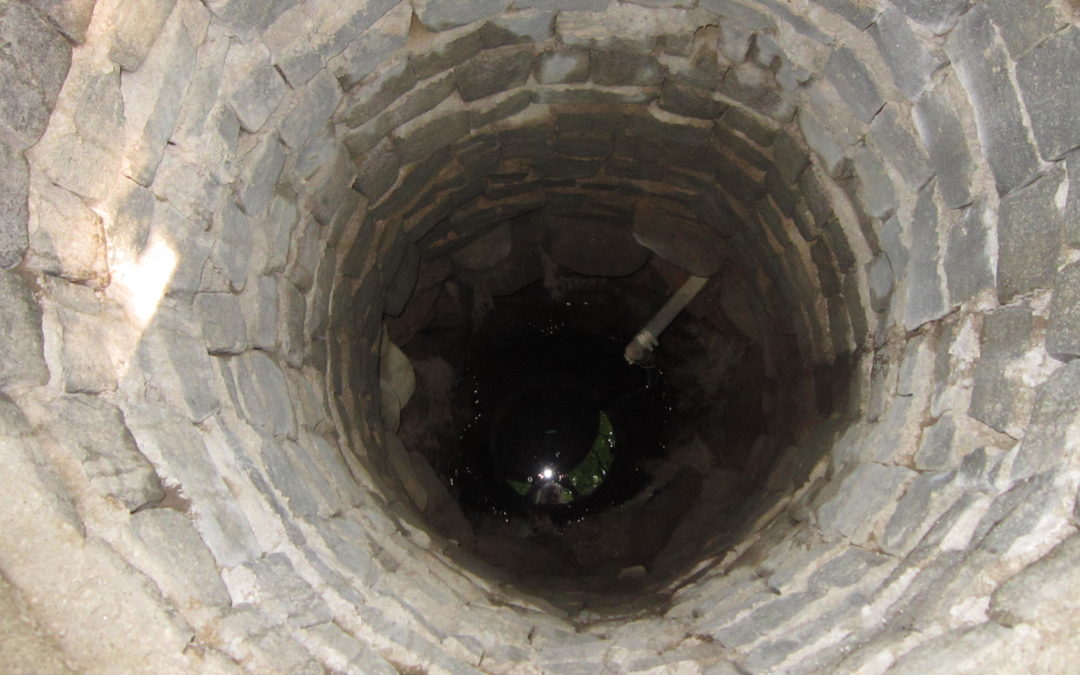 Whenever a drought hits, it occurs to me that the word “aquifer” fools a lot of people. Like, me.

To me, the word sounds like “aqua full,” producing visions of underground lagoons into which we can drop a straw when necessary. Apparently I’m not alone in this misperception.

“I talk to a lot of people and they say, What about that river under our house?” said Abby Fopiano, the water well program manager for the state Department of Environmental Services. “I have to tell them, sorry, but you don’t have a river under your house.”

Like anybody involved with underground water in New Hampshire right now, Fopiano is talking to a lot of people about their wells as the summer-long drought continues.

“We have over 100 calls a day for folks that have wells – they’re either running out of water or very concerned they’re going to run out of water,” said Jonathan Swain, president of Capital Well in Dunbarton. “And springs, too; unprecedented. A lot of homes that are fed off of springs in northern New Hampshire, those are dry.”

Depending on where in the state you live, New Hampshire has received 8 or 9 inches less precipitation this calendar year than the 30-year average. Things weren’t too bad until April and May, when it really started to get dry. Since it takes a few weeks or even a month or two for surface water to percolate down to aquifers – there’s that word again – the dryness which has been apparent on the surface is now being felt down below.

“It’s spread throughout the state, doesn’t seem to be one localized area,” said Fopiano.

Hole in the ground

A well is just a hole in the ground that water falls into. If you’ve put the hole in a place where water is moving – seeping throughout sand or gravel if it’s a “dug well” or oozing through fissures and cracks in bedrock if it’s a “drilled well” – then lots of water will fall into the hole and you can pump it into your house.

That water isn’t permanent, though; it needs to be recharged from the surface.

About 80% of New Hampshire’s area, involving about half the population, is served by private wells rather than “city water,” according to DES estimates. Almost all of those are drilled wells, ranging from 100 to 1,000 feet deep, partly because bedrock is so prevalent here. Dug wells, rarely more than 25 feet deep and usually with walls of unlined field stone, are increasingly rare partly because they’re susceptible to pollution from runoff. They’re more common in the North Country.

Roughly 4,000 new wells are drilled in New Hampshire each year, Fopiano said. That doesn’t include deepening of existing wells that have run dry.

Depending how deep they have to go to hit water, a new drilled well will cost from $10,000 to as much as $30,000 if you’re really unlucky. You’ll also need patience; Swain said there’s a 13-week waiting list for a new well.

I couldn’t find set prices for a new dug well because they’re so rare these days.

One advantage of dug wells is that you can peer inside to see how much water you’ve got. In a drilled well that is impossible to know unless you’ve got an electronic sensor installed deep in the well, which is rare. Fopiano says a good sign that a drilled well is running dry comes when the water changes color or gets a little gritty because the reduced flow can’t dilute natural minerals.

I have an old dug well on my property, 16 feet deep, that I no longer use. For this story I grunted and strained to slide off the concrete cap so I could take a picture of a dry well. A spring-fed pond nearby has almost disappeared so I assumed the well would be empty. To my surprise it had 7 feet of water in it.

That difference reflects another fact about aquifers: They’re tricky. Just because water flows from A to B on the surface doesn’t mean it flows in the same direction underground – it can easily move in the opposite direction if deep geology provides a different “downhill.”

Fopiano pointed out a drawback to drilled wells that hadn’t occurred to me.

“There’s not a lot of storage in the bedrock aquifer. Because we get water from the cracks, fractures, veins – people call them different things – that flows through a network of fractures rather than from a large pot of water, we don’t have that much storage. So capacity can diminish fairly quickly and take a while to recover,” she said.

How long to recover? It depends on your well but even if we started getting normal rain again, it will take at least a couple of weeks before it percolates down far enough to recharge. That’s partly because the surface is so dry that the soil and plants will soak it up fast.

Which brings up one more thing to think about: Winter.

“We would need a couple weeks of saturating rain” to get back to normal, said Swain of Capital Water. “What’s probably going to happen is the ground is going to freeze before it rains enough.”

Once the ground freezes, of course, rain or melting snow can’t percolate down so your well can’t get recharged.

“If we get a lot of rain from here to the end of October wells are going to be OK. If not, they are going to be impacted for a longer timeline, maybe until spring,” said Fopiano.

If you have a dry well and have to pay to have water trucked to your house and kept in a 500-gallon trailer in the driveway, that’s bad news.

“It’s not overwhelming,” she said of reports of dry wells. “It’s not as high as we would expect for where we are in the drought.

“We have been through several of these droughts in the past 20 years; people have learned to take measures to mitigate them. It has given us some resiliency. … Droughts are becoming more frequent, so people are better at holding out,” he said.

And if you do get worried, the No. 1 thing is to stop outdoor watering.

“Lawn-watering, outdoor water use, uses up to 10 times more than your indoor water use,” she said. “Some people are putting all their water into getting the grass green rather than flushing their toilet.”

Fortunately, my lawn is so lousy that I’m not tempted!