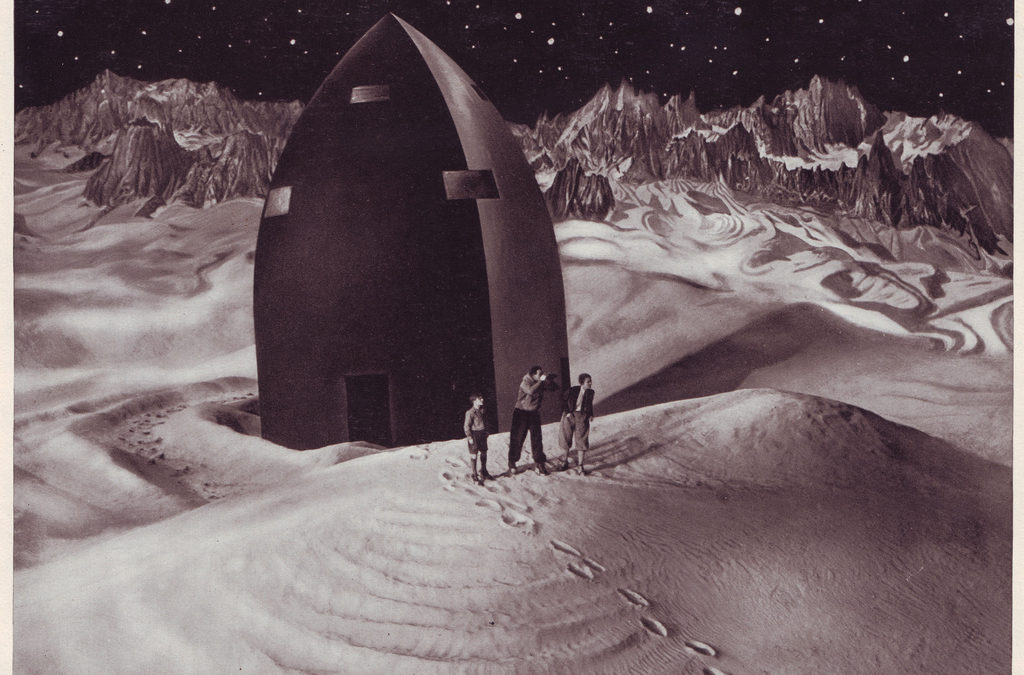 Here’s a hardly edited PR release from an art house movie theater near me. If you’ve never been to the Wilton Town Hall Theatre, you’ve missed a treat; it is an awesome place.

A sci-fi adventure sometimes called the first feature film to depict realistic space travel will be screened as part of a three-day UFO/Big Foot Film Festival this weekend at the Town Hall Theatre in Wilton, N.H.

Admission is free and the screening is open to the public; a donation of $10 per person is suggested to help defray expenses.

The screening is part of the Greater New England UFO Conference and Film Festival, which runs from Friday, Oct. 9 through Sunday, Oct. 11 at the Town Hall Theatre. For more information on the three-day festival, which also focuses on the legendary ‘Big Foot’ creature, visit www.newenglandufo.com.

The rarely seen full-length version of ‘Woman in the Moon’ follows an intrepid band of space pioneers as they attempt mankind’s first voyage to the lunar surface, where they hope to find large deposits of gold.

The story has a multi-stage rocket to escape Earth’s gravity, and a separate capsule is used to reach the lunar surface. The film is also noted for introducing the idea of a dramatic “countdown” prior to launch, which later became standard procedure in space flight.

But ‘Woman in the Moon,’ with its melodramatic plot, also stands as the forerunner of many sci-fi soap opera elements that quickly became clichés: the brilliant but misunderstood professor; a love triangle involving a female scientist and her two male crewmates; a plucky young boy who yearns to join the expedition; fistfights and gunfire and treachery on the lunar surface.

Added to the mix is a vision of the moon (created entirely on a massive studio set in Berlin, Germany) that features a breathable atmosphere, giant sand dunes, distant mountain peaks, and bubbling mud pits.

“This is a great and at-times bizarre film, one that must be seen to be believed,” said Jeff Rapsis, a New Hampshire-based silent film accompanist who will create live music for the screening.

Rapsis, a resident of Bedford, will improvise live musical accompaniment during the screening, using a digital synthesizer to recreate the sound of a full orchestra and other more exotic textures.

‘Woman in the Moon,’ a full-length feature than runs more than 2½ hours, should not be confused with the much earlier film ‘A Trip to Moon,’ a primitive “trick” short movie made by French filmmaker George Méliès in 1902 and famous for the image of a space capsule hitting the eye of an imaginary moon man.

Director Fritz Lang, responsible for the groundbreaking sci-fi epic ‘Metropolis’ (1927), planned ‘Woman in the Moon’ as another step in his quest to stretch cinema’s visual, story-telling, and imaginative capabilities.

As one of the last silent films of German cinema, ‘Woman in the Moon’ was unable to compete with new talking pictures then in theaters, making it a box office flop at its premiere in October, 1929.

However, German rocket scientist Hermann Oberth worked as an adviser on the movie, and it developed cult status among the rocket scientists in Wernher von Braun’s circle starting in the 1930s. During World War II, the first successfully launched V-2 rocket at the German rocket facility in Peenemünde had the “Woman in the Moon” logo painted on its base.

During the war, the Nazis tried to recall and destroy all prints of ‘Woman in the Moon’ due to its detailed depiction of state-of-the-art rocket propulsion technology; in later years, this served to make the film even more hard to find. For many years, the film was available only in cut-down 16mm versions that ran as short as one hour.

But pristine and complete 35mm copies of ‘Woman in the Moon’ did survive in several European archives. Today, restored prints are amazingly clear and sharp, Rapsis said.

‘Woman in the Moon’ will be shown with live music on Saturday, Oct. 10 at 2 p.m. at the Town Hall Theatre, 40 Main St., Wilton, N.H. Admission is free and the screening is open to the public; a donation of $10 per person is suggested to help defray expenses. For more info, visit www.wiltontownhalltheatre.com or call (603) 654-3456.