This year’s drought will slow tree growth next year 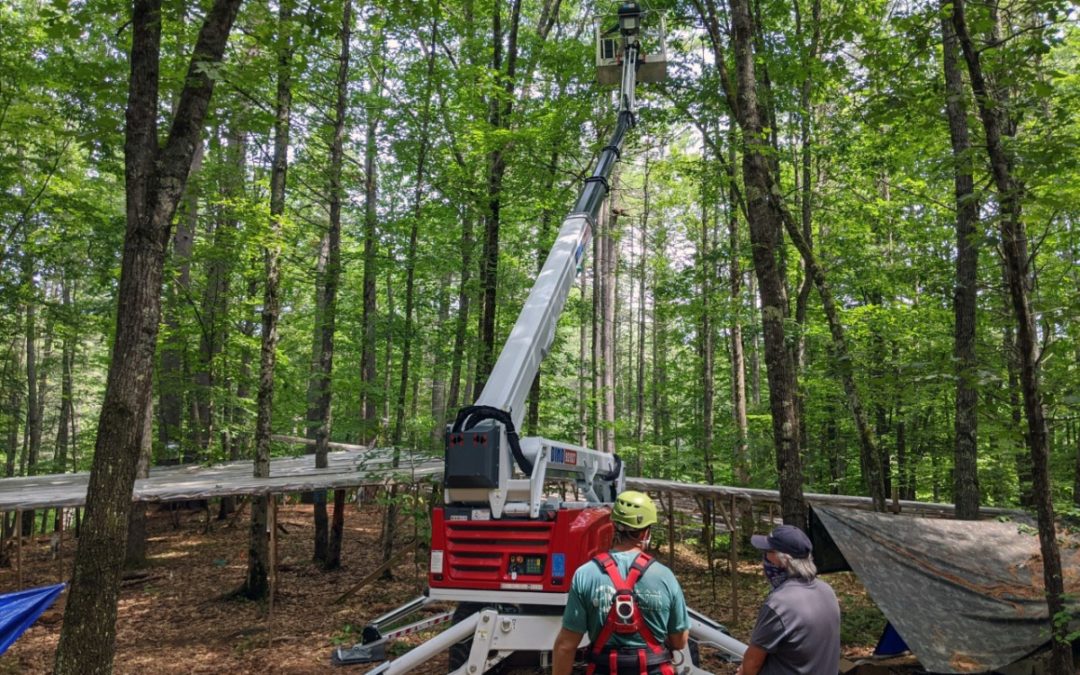 NHAES researchers sample a tree canopy in fall of 2020 as part of their drought research. (UNH photo)

From UNH News Service: Red oak and white pine trees could experience slower growth next year as a result of the severe drought in New Hampshire and most of New England that began in mid-August, according to a researcher with the New Hampshire Agricultural Experiment Station in the UNH College of Life Sciences and Agriculture.

Experiment station scientist Heidi Asbjornsen, associate professor of natural resources and the environment, said the results of previous drought experiments foretell that red oaks could experience a slower recovery from the drought next year compared to white pines, although growth for both species is likely to lag. This can result in reduced overall growth during 2021, particularly for red oaks and may make them more susceptible to pathogens and disease.

According to the NH Division of Forests and Lands, New Hampshire is 81 percent forested, accounting for 4.8 million acres. It is the second-most forested state in the United States. The forest’s direct impact on the economy of the state is $2.26 billion annually, approximately half related to forest-based manufacturing and half to recreation and tourism. Red oak and white pine are common to New England forests and represent significant economic and ecological value in the region.

The 2020 drought is similar to the one the state experienced in 2016: occurring later in the season and affecting the southeast portion of the state to the greatest extent. The 2016 drought was the 11th driest summer that New Hampshire had experienced since 1895, and the driest since 1993.

“Both red oak and white pine are having a mast year—producing a prolific amount of seed, which happens only sporadically. Red oak also experienced a mast year in 2019.  This may increase the trees’ risk for depletion of carbohydrate reserves. These reserves are important for providing energy to the tree during stressful periods, such as droughts, as well as for producing defense compounds and other responses that reduce risk from pathogens and pests,” Asbjornsen said.

Asbjornsen explained that white pine and red oak have very different ecological “strategies” for managing moisture stress that occurs during a drought. White pines tend to be relatively conservative, shutting down water uptake and photosynthesis as moisture becomes more limiting. This allows white pines to protect its tissues against damage from prolonged drought. This response comes with the tradeoff of reduced carbohydrates production—from photosynthesis—for growth and storage.

In contrast, red oak is considered a more drought tolerant species due to its deep roots, ring-porous wood, and a less conservative water use strategy that allow it to continue photosynthesizing even as moisture becomes more limiting. However, Asbjornsen’s previous results show that once soil moisture levels fall below a certain threshold, red oak also shuts down its water use and photosynthesis, suggesting that it may experience physiological stress during extreme droughts.

“Since the historical occurrence of extreme droughts was very rare in this region, the red oak’s less conservative strategy of high drought tolerance was often beneficial. However, we might expect that if the severity and frequency of droughts increase in the future, this may have a greater detrimental effect on red oak than white pine. Our experimental drought research will continue over the next several years to better understand the differing sensitivities of these two important northeastern tree species to extreme drought, as well as the implications for the health and productivity of mixed pine-oak forests,” Asbjornsen said.

“Because this drought is occurring late in the growing season, the trees already have completed much of their growth for this year. Thus, we would expect the overall effects of the drought on tree health and growth this year to be relatively low. However, as an evergreen species, white pine does continue photosynthesizing later into the season and even during the winter months, and therefore it may experience some impacts on its overall health,” she said.

Furthermore, the long-term impacts of this drought on white pine and red oak likely will depend on whether the state experiences more droughts over the next several years, as this would continue to deplete carbohydrates and weaken the trees’ ability to survive severe moisture stress, she said.

“With repeated severe droughts, it is possible that we will start to see mortality in these species. With climate change, the forecast from various modeling studies is that New England will experience an increase in total annual rainfall, but at the same time, prolonged periods without rain also will become more common, especially during the growing season,” Asbjornsen said.

Regarding other species, the most notable observation researchers saw during the 2020 drought was that some birches dropped a large number of leaves in August when it was both dry and hot. This is a strategy to reduce the impacts of moisture stress. Without leaves, they will lose less water and protect their tissues from damage. However, since they lost their leaves relatively early in the growing season, this also may put them at greater risk for negative health impacts or even mortality in the future. Scientists will be monitoring the birches next year to determine whether many of these trees succumbed to the drought this year.

“One way that forest managers can help to mitigate the impacts of droughts on our forests is by conducting silvicultural treatments that keep forests healthy and resilient to a wide range of disturbance, including drought. In particular, thinning stands so that they don’t become too dense can help alleviate the impacts of drought. This reduces competition among trees for limited water resources and allows them to increase their growth and maximize their health during ‘good years’ when water is plentiful,” Asbjornsen said.

Related stories:
Some Tree Species Fared Better Than Others in 2016 New England Drought

This material is based upon work supported by the NH Agricultural Experiment Station, through joint funding of the National Institute of Food and Agriculture, U.S. Department of Agriculture, under award number 1013351, and the state of New Hampshire.