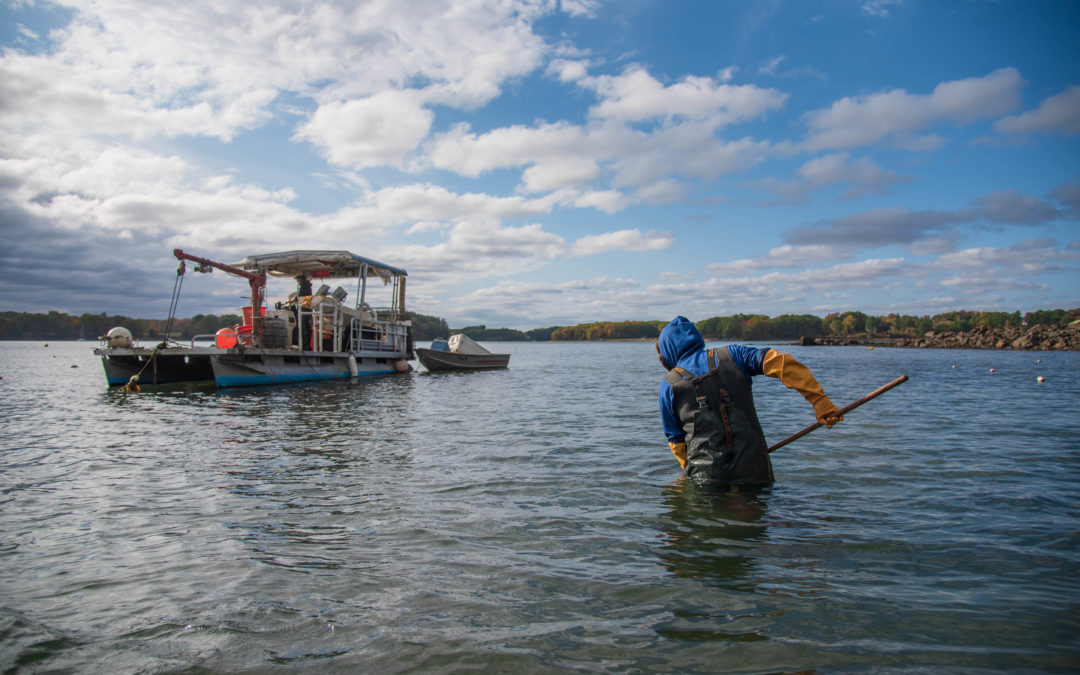 Adult oysters that can’t be sold are dumped overboard; at low tide, farmers spread them out with rakes to create beds of shells where baby oysters can grow. BELOW: Oysters on the floor of Great Bay at low tide Photos courtesy of Tim Briggs / UNH

So I’m going to ignore my inner writing snob and tell you that today’s column concerns a win-win – in fact, a win-win-win! – for the environment, for science and for a young farming industry that was hit by the pandemic.

At one time the Great Bay, the large tidal basin that erupts out of the Piscataqua River and fills some 6,000 acres between Portsmouth and Newmarket with a mix of salt and fresh water, held hundreds of millions of eastern oysters in as many as 1,000 acres of oyster beds. Then humans, as is our habit, wiped them out.

The story I hear is that we harvested them all  and sold them to  New York City after those folks decimated their own oyster beds, but that might just be a bivalve version of the Yankees-Red Sox rivalry.

Whatever the cause, the loss was bad. Oysters feed by filtering material out of the water, and they are a great way to keep both salt water and fresh water clean. The loss of oysters has been one of the factors contributing to the Great Bay’s pollution problems, so people want to restore them.

Unlike many environmental benefits, oysters have market value because some people like to eat them (they’re not my favorite), providing an extra restoration incentive. With that in mind, for the past decade or so UNH and various environmental partners have been helping independent farmers establish small oyster beds here and there, selling the product to raw bars and other eateries.

It’s a slow process because you’ve got to find the right place for an oyster, establish the right environment for oysters to grow and naturally reproduce, and be patient. The effort is still small – roughly 18 acres of reef have been re-established – but is growing, with two or three dozen operations receiving licenses to establish an oyster bed in various areas. Total sales have been in the half-million-dollar range, according to estimates.

Then the pandemic hit. Restaurants shut down and like many farmers, these growers were stuck with an unsellable product. Disaster loomed.

N.H. Sea Grant is part of a national program; Maine has one and Massachusetts a couple, each associated with a university or research institute. They provide money for research into aquaculture and other ocean-related areas. Steve Jones, UNH research associate professor and associate director of N.H. Sea Grant, explained what happened next.

“The national budget included several million dollars for natural competition for aquaculture research. Instead, it was decided to take it and distribute it to each Sea Grant program affected by COVID. In New Hampshire, the oyster growers were the obvious choice – received about $100,000,” he said.

Instead of just handing money to the farmers, however, Sea Grant is buying some of their excess oysters, usually ones that have gotten too old to sell to the few markets that remain, and getting the farmers to help them do research.

“We have established experimental restoration reefs on areas that farmers have licensed, to see how well these large oyster sites recruit, or get little oysters to settle on them and start growing,” Jones said.

Oysters reproduce by spewing larvae out into the open water, where they float and swim around until they settle somewhere and attach themselves. (Adult oysters normally stay in one place but if scraped off they can re-attach elsewhere and continue growing.)

Oyster larvae are unlikely to grow, however, unless they settle on a hard place, like a rock or concrete. They do best if they settle on a shell of an oyster or other bivalve, for reasons that aren’t entirely clear. As I’ve noted in the past, restoration efforts include projects to collect shells from restaurants and dump them into the Great Bay in hopes that young oysters will find them.

The current project is trying to jump-start that process with science, creating a large experiment to see which variables matter and in what circumstances with farmers dumping these purchases overboard in carefully selected locations and then raking them out during low tide to create new oyster beds that will be monitored.

“We have 8 – actually, now it’s 9 – farmers involved. Each of them have different areas that they are licensed to grow in, that have slightly different conditions, differences in current velocity, and salinity, and depth, things like that. So we’re going to be able to learn a lot about natural oyster population restoration,” Jones said. “All the farmers have transplanted oysters and are gathering information about them – the size, the range, evidence of growth. Next spring we will do another assessment, sample and measure. At the end of next summer, after they reproduce, we’ll be able to get a real sense of how well the restoration works.”

By then, with any luck, the economic ecosystem of coastal restaurants will be recovering and the Sea Grant aid won’t be needed.

In short, this project is helping New Hampshire oyster farmers financially (one win), helping increase the population of oysters filtering Great Bay water (another win) and providing knowledge that can help bring back even more oysters (win number three).

That’s a cliche I can live with.