UNH is part of the test-your-sewage-for-COVID team 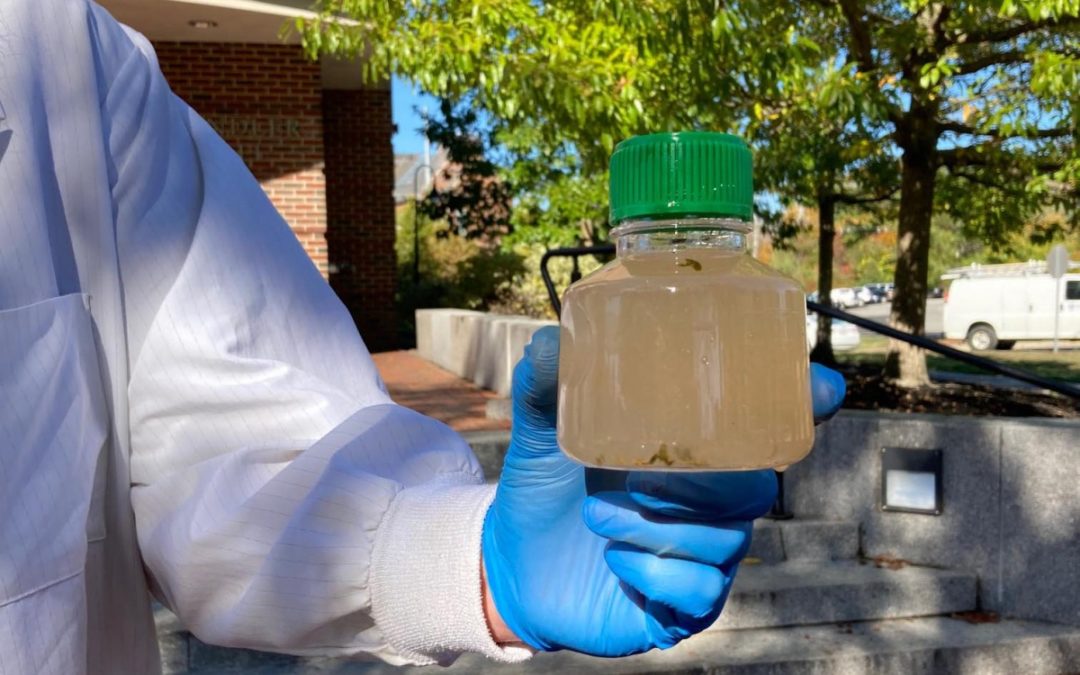 Sewage sample that will be tested in Mouser’s lab and UNH’s Hubbard Center for Genome Studies to detect and track the COVID-19 virus. UNH Photo: Paula Mouser

Testing wastewater for genetic markets indicating COVID-19 is an increasingly popular idea because it can spot outbreaks before they would otherwise be seen. I wrote in August about Keene starting it up – UNH has a similar program. Here’s their press release:

The University of New Hampshire has gone underground to flush out cases of the coronavirus by testing wastewater on campus. The sewage sampling is being used as a secondary surveillance method to twice a week individual nasal tests to track and detect SARS-CoV-2, the virus that causes COVID-19.

“Sewage sampling can be a valuable surveillance tool because it can provide an early warning to possible infection hot spots on campus and help identify areas where the virus may be present but not detected in individuals because they aren’t showing symptoms,” said Paula Mouser, associate professor of civil and environmental engineering.

The wastewater testing, which is being led by a team of environmental engineers in Mouser’s lab, can identify traces of the virus’s genetic material in human sewage. When individuals are infected, the virus is present in their gastrointestinal tract and released in human waste products which move into the sewer lines. Wastewater samples, which contain urine and feces as well as traces of sewage from cooking and laundry, are retrieved from manholes around campus and tested for two biomarkers (N1 and N2) of the SARS-CoV-2 virus. Each manhole accessed represents wastewater from a grouping of two to five dorms known as a mini-sewershed. There are ten residence hall sewersheds currently being tested, representing close to 4400 students, or approximately 80% of those living on campus. Mouser’s team is also testing wastewater at the local treatment facility to see how the campus signal relates to the biomarker signal in the whole community.

Wastewater testing began when students moved back onto campus for the fall semester. Since the sewer pipes were not in use during part of spring semester and over the summer, wastewater began flowing again when residence halls became occupied. The sensitive test was able to detect a weak baseline level of the viral biomarkers in the wastewater when students returned, which the team believes is related to former infections. The human gastrointestinal tract can shed the virus for several weeks after an individual tests negative with a nasal swab test. Even though students were required to test negative before returning to campus, initial biomarker baseline levels suggest that some students may have been unknowingly infected over the summer. Sewershed biomarker levels have also tracked closely to known infections that occurred in several campus residence halls.

At UNH, wastewater samples are taken three mornings a week. The sample processing is done in the Mouser lab with biomarker quantification conducted with a digital droplet PCR instrument housed at UNH’s Hubbard Center for Genome Studies.

If a spike of viral biomarkers is detected in the sewage from one of the dorm groupings, the information is compared with corresponding results from primary nasal swab COVID-19 tests processed at the university testing lab, located at UNH Health & Wellness. Students living on campus are routinely screened every four days with self-swabbing kits. The goal of the wastewater testing program is to correlate any uptick of cases to prevent the spread of the virus and help students get the proper care. According to the World Health Organization, wastewater testing has a long history in virus surveillance and has been used in other outbreaks like the polio virus.

“We realized early on the importance of doing virus testing ourselves,” said Marc Sedam, vice provost for innovation and new ventures. “The wastewater testing has been a useful enhancement for environmental monitoring but not a replacement for our robust campus testing process.”

While wastewater testing started as a complimentary monitoring service for the UNH testing lab, Mouser’s team has heard from a number of schools, wastewater utilities, and healthcare facilities looking for guidance on creating a similar approach and technologies. Her team is working on a pilot program to help organizations apply the biomarker surveillance approach to their own wastewater samples in their communities across the state.