COVID hospitalizations are starting to rise in New Hampshire 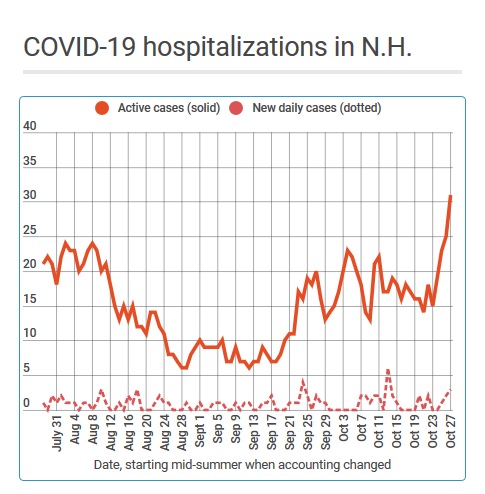 With 300 new cases of COVID-19 reported in New Hampshire in the past three days the average number of daily new cases has exceeded the peak in May and, just as worrisome, the state is seeing the first hints of an increase in hospitalizations.

10 people had been hospitalized with COVID-19 over the previous four days (as of Oct. 29) and the number of active cases in the sate is twice what it was a week earlier. While that figure is still relatively low – 29 people were in the hospital with COVID-19 on Thursday, a small portion of available beds and rooms  – it is a sharp increase the 16 hospitalizations that New Hampshire saw a week before.

As a rule of thumb, hospitalizations start to increase about two weeks after the number of new cases starts to rise. That hasn’t happened in New Hampshire unlike other other parts of the county where outbreaks of COVID-19 have overwhelmed some hospitals and emergency rooms.

Wednesday’ s report from the Department of Health and Human Services raised the two-week average of new cases in the state to 96. The previous high was 91 on May 13.

Comparison with the spring is suspect because so little testing was being done in May. But the number of positive has soared recently, doubling in three weeks, even as the number of tests has been fairly constant and the percentage of positive cases in PCR tests has hovered around one percent, indicating that testing is widespread.

One factor in that rise of cases is the addition of antigen tests to the mix, adding a dozen or two positives each day. Because antigen tests are done quickly on-site, rather than in central laboratories as is done with PCR tests, the state does not collect daily data on the number performed or their positive rate.

No new deaths were reported Tuesday. About one person has died per day in the state in October, most of them in long-term care facilities. That is slightly higher than during mid-summer.

You can see the charts I update on weekdays (and some weekends) here: Daily new cases – hospitalizations – deaths.