Ranked-choice voting just might decide the future of America (Update: Or not) 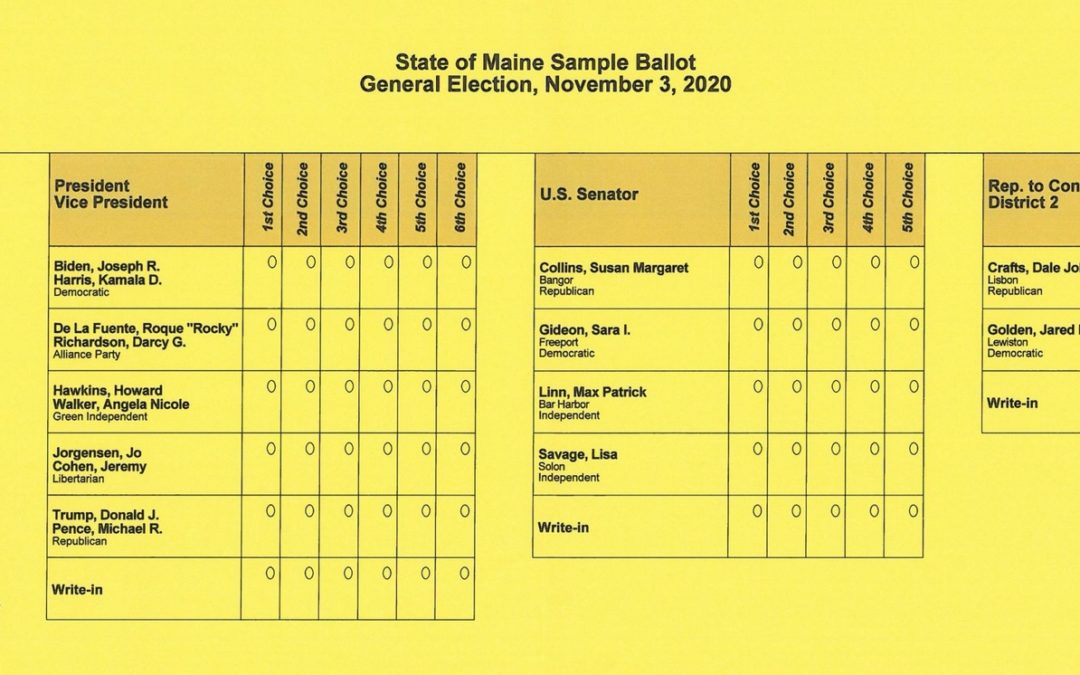 Wednesday morning note: This was written Monday and I should really rewrite it, since Collins won pretty handily in Maine and the push failed in Massachusetts, 55%-45%. But I’m beat and frazzled from the endless election, so it’ll have to stand.

It’s not entirely out of the question that the fate of the nation is going to depend on a system that until recently was regarded as a goofy geek idea unworthy of serious consideration.

I refer to ranked-choice voting, also known as instant runoff, which is being used in the U.S. Senate race in Maine for the first time. If nobody gets 50% of the votes, which is possible in a very tight race with two independents on the ballot, then voters’ second choice will be considered and ballots recounted immediately.

That’s an impressive potential effect for an idea that until recently was relegated to the back room along with Esperanto advocates and people who think humans should use a base-12 number system. RCV fans must be absolutely giddy with the attention.

Ranked-choice fans in New Hampshire will also be looking south Tuesday, when Massachusetts considers a ballot initiative to adopt ranked-choice voting in state and federal elections starting in 2022.

If that passes, it will be a real watershed. No offense to Maine, but much of the nation regards the Pine Tree State as something of an oddball. Massachusetts is in a different category; its adoption of ranked-choice voting would really make people sit up and notice.

(Speaking of Massachusetts, geeks will also be paying close attention to another statewide initiative there, which would expand the state’s right-to-repair law regarding automobiles. But that’s a different story.)

I have written about various types of ranked-choice voting many times over the decades because it’s an interesting approach to the problem of determining the “true” preference of large groups of people choosing among more than two options. You may recall that I even ran a ranked-choice experiment in the Democratic presidential primary, just for fun. I didn’t do it for the GOP race because Trump was so dominant that voting systems didn’t matter.

Pete Buttigieg won my test and came in second in the real primary, edged out by Bernie Sanders. Boy, that seems like a hundred years ago.

Despite my years of interest in ranked-choice voting, however, I was long dubious about practical applications. The various types of ranked-choice voting struck me as a typical geek way to attack a problem – concentrate on the technical mechanism rather than the human behavior – that wouldn’t work in the real world.

As support I pointed to Arrow’s Theorem from Nobel laureate economist Kenneth Arrow, which proved mathematically that no vote-counting system is perfect. (Perfection is defined technically; the wikipedia article on Arrow’s Theorem is pretty understandable if you’re prepared to tackle concepts like Pareto efficiency.) If a different voting system doesn’t solve all the problems, I said, it’s not worth the complexity and possible confusion.

But I have changed my tune. Our first-past-the-post, all-or-nothing voting has created such a toxic, inefficient and know-nothing system of governance that I now think ranked-choice or instant-runoff voting is worth adopting to help return our politics to a more rational level. It won’t do it alone, of course, but it could help.

The main argument for ranked-choice voting is that when candidates know they might have to depend on the votes not just of their most rabid supporters but of other folks, they’ll calm down and broaden their appeal. The Senate race in Maine is actually not a very good poster child for this argument because the race has been the most expensive in state history and has been loud and mean by Maine standards, although by Trump vs. Biden standards it has been a cross between a debating society and a join-hands-and-sing-kumbaya session.

If the Maine race does go to a ranked-choice runoff then pundits say Collins will probably lose because the more popular of the two independents has urged her supporters to put Gideon in the No. 2 slot.

Should that happen the GOP, which regards the system as some sort of complicated trick, will bust a gut, even more than when instant runoff unseated a Maine Republican congressman in 2018. The Maine GOP has sued several times trying to overturn RCV and its use in the Maine Senate race would certainly play into any loud, angry and hopefully not violent attempt to upend the national vote.

That’s a lot of pressure for a system which most Americans have never heard of. Let’s hope it works well.