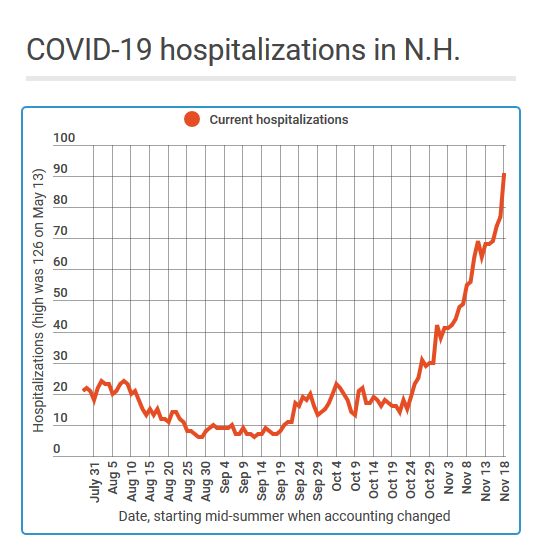 You know things are going badly with COVID-19 when it’s not worth the effort to warn people anymore.

New Hampshire public health officials announced last week that they would cut way back on contact tracing, the process of alerting people who have been in contact with somebody who tested positive for COVID-19.

Contact tracing is useful when a contagious disease is relatively rare because it can contain outbreaks before they spread. People can be warned about a previously unsuspected danger and take action, getting tested or hunkering down.

But once infection is circulating widely, tracing the contact of each positive case doesn’t accomplish much because everybody who has been in contact with anybody else is already in danger of infection. There’s no point in finding them and telling them except for certain extreme situations, such as in nursing homes.

“As community transmission increases, it becomes a less effective strategy of identifying and breaking the chains of transmission,” is how State Epidemiologist Dr. Benjamin Chan put it in the weekly briefing.

Even more than the startling rise in case numbers that New Hampshire has seen, this change in policy is a sober reflection of how quickly the pandemic has gone from being under control in New Hampshire to getting out of control.

And the numbers are startling. Several days recently more than 400 new cases have been reported in one day, and the 14-day average of new cases being tracked by the Monitor reched 302 on Wednesday, having doubled in the past two weeks.

If this growth continues, then by Thanksgiving we’ll be seeing more new cases every two days than we saw during the entire month of August.

Perhaps more worrisome: Hospitalizations have started rising sharply, tripling from 30 to 91 in a little over two weeks.

One bright spot: COVID-related deaths have been increasing quite slowly, with about one person a day dying.

Back in the spring, health officials were warning that no matter what happened in the summer things would get worse in the fall – just as they did during the Spanish Flu of 1918, and during regular flu seasons. That prediction is coming true with a vengeance.

More than ever, it makes sense to wear masks, socially distance yourself, avoid unnecessary contact, and get a flu shot. COVID-19 vaccines will be coming next year. Just stay healthy until they arrive!