What about that C-130 fuselage that crawled through Concord? 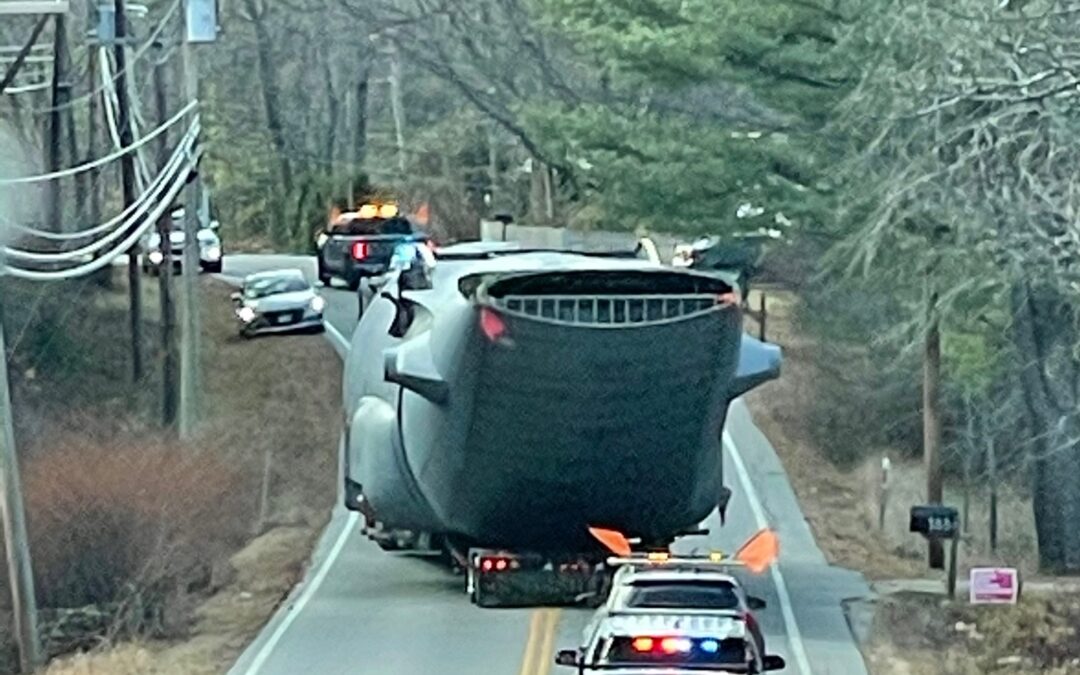 Last week the 55,000-pound, 50-foot-long fuselage of a C-130 cargo plane was hauled through Concord for reasons that are still a little mysterious, and since then I’ve been writing about it almost every day, much to the interest of readers. I’ve been besieged with people calling/emailing with theories, sightings (“Here’s a picture of it in Hopkinton!”) and reminiscing about their active-days jumping out of or otherwise interacting with C-130s.

Until the Air Force or other military contacts release the story, we won’t know exactly why it was here or where it will end up. The contractors I’ve talked to would love to tell me but don’t want to piss off their customer.

Here’s what we know as of Thanksgiving, from the Concord Monitor. Hopefully the final story will come out eventually.

The huge military transport plane that was hauled through Concord last week had previously spent time inside a temporary hangar at Pease International Airport, where it had been sent after being at an Army base in Maryland that conducts biomedical research.

That’s the latest update in the story of the 55,000-pound fuselage of a C-130 that crawled through Concord and Hopkinton on Wednesday, raising a thousand questions from Monitor readers. The plane’s complete history and resolution awaits official release from the military.

According to John Robinson, a civilian pilot who works at Pease airport and observed the plane over many months, the C-130 flew into the airport some months ago, after which “they built this big structure and they put the plane in it.

“It was almost like a makeshift hangar,” he said, describing the structure as being made of fabric-like material, sealed up. “It looked like it was being fumigated, or something like that.”

Pease authorities say a Florida company called Aeroclave was involved with the plane there. Aeroclave sells “a system capable of decontaminating commercial and military aircraft from pandemic-producing viruses and other disease-causing pathogens,” according to its website, but the company declined to discuss specifics until the military has authorized the release.

According to a report from the Airline Operators and Pilots Association, before coming to Pease, the C-130 had been decommissioned and taken to Fort Detrick in Maryland, where it was “used to test equipment and procedures.” The history of Fort Detrick says that it is a “center for advanced biomedical research and development” that includes the National Interagency Biodefense Campus as well as branches of the National Biodefense Analysis and Countermeasures Center with the U.S. Army Medical Research Institute of Infectious Diseases. Until 1969, the site in Frederick, Md., about 50 miles from Washington, D.C., was the center of research into “offensive biological warfare,” involving “agents requiring specialty containment.”

According to Robinson, the plane was in the hangar for some months, then a few weeks ago the structure was taken down and then the plane’s engines, wings and tail stabilizers were removed. Last Wednesday the fuselage was carried on a flatbed through New Hampshire, passing through Concord and Lebanon on the way to Vermont. According to the company hauling the plane, it is being taken to Legacy Aerospace in Fletcher, N.C., which does repairs, support and service to older aircraft. The wings and stabilizers will be moved separately.

Legacy Aerospace declined to comment on the eventual fate until the military gives permission.

The C-130 is a four-engine turboprop created in 1956 for carrying troops and equipment around the world. It is still being produced today, making it what appears to be the longest continuously made military plane in U.S. history. According to the serial number, this plane was built in 1974 and  decommissioned last year.