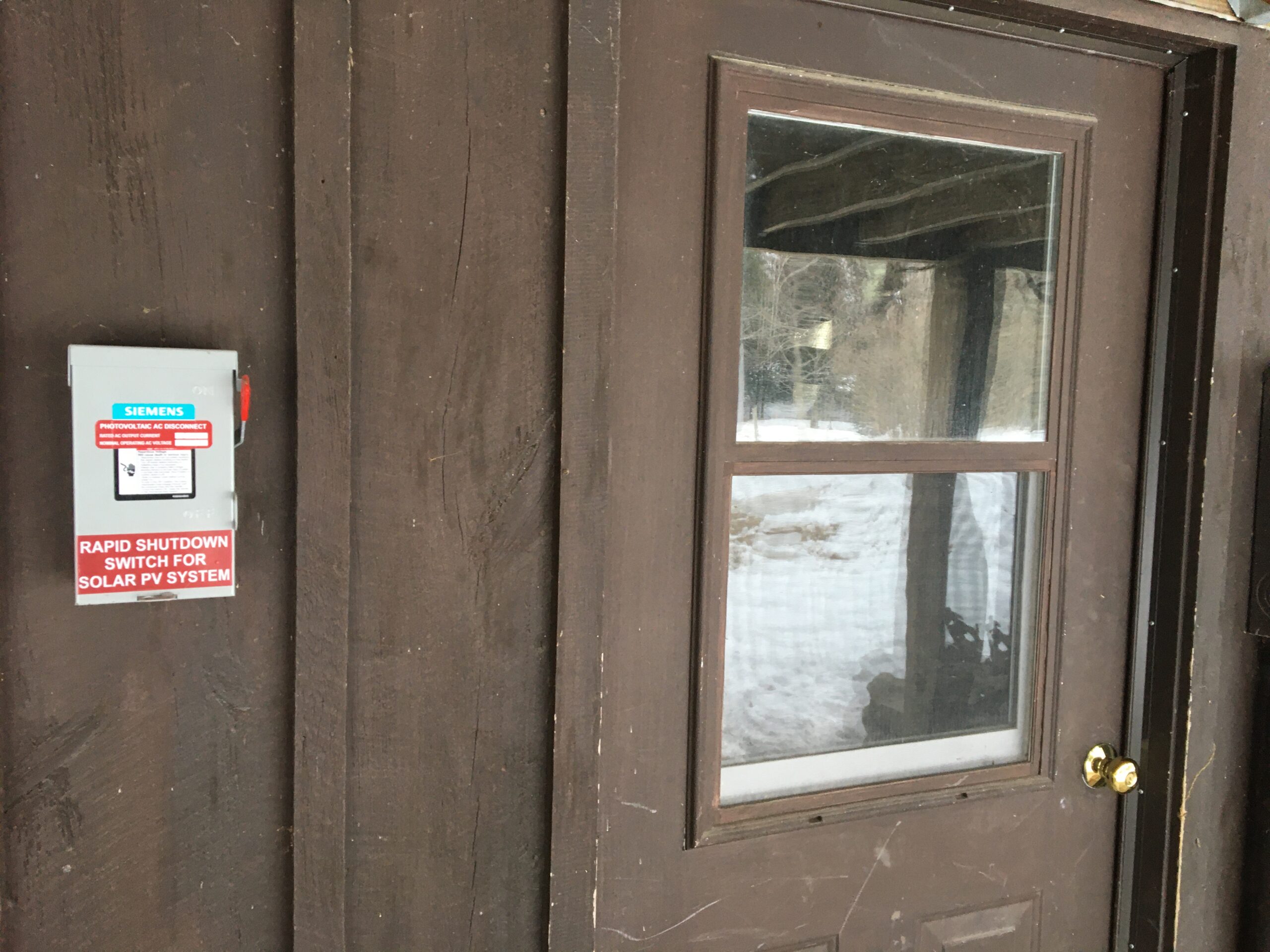 The exterior throw switch at my house lets firefighters shut off my PV system without entering.

As we all know, water and electricity don’t mix. Unless, that is, you’re fighting an electric-car fire.

“It’s like a normal fire attack, but you have to have an adequate supply of water to ensure you can cool that battery. You may need additional water supply,” said Capt. Daniel Tice of the Division of Fire Standards & Training.

What?!? Firefighters don’t need new high-tech foamy stuff or chemical thingamajigs when they respond to accidents, even though lithium-ion batteries are starting to replace tanks of gasoline?

No, said Tice, patiently explaining what I should have already realized: “Batteries are direct current. Alternative current is where we have that concern about water and electricity.”

I talked with Tice and Chief Andy Anderson of the Bureau of Fire Training last week because I was curious how New Hampshire’s first responders are preparing for the rise of electricity storage in buildings and vehicles.

This is a hot topic, so to speak, in the industry. The National Transportation Safety Board just issued a report argument that first responders need more training to deal with the possible fire risk from crashed electric cars.

The concern is that lithium-ion batteries can explode, especially when exposed to high heat. It’s not that the batteries are more dangerous than the thin-walled tanks full of explosive liquid loaded into most cars; per mile traveled, instances of fire are far lower for electric vehicles than gasoline vehicles, says the NTSB.

The problem is that the dangers are different and might come as a surprise. For first responders, surprises are to be avoided.

Firefighters have always needed to be able to identify different vehicles on the fly to plan response at an incident. Knowing whether it’s the hybrid version of the vehicle, or an all-electric car, is just one more thing to keep in mind.

“Once you find out it’s a hybrid or electric vehicle, you communicate – let’s get our thermal imager out, make sure (the battery’s) not overheating. You need communication on-scene about what’s going to happen with everybody,” said Tice. “For the incident commander, alert the law enforcement or tow truck operation that it is an electric vehicle. They may have their own process or procedures downstream, after the emergency is secured.”

These issues first arose with hybrid cars, which have both electric and gas-powered engines, and will only get more common. The Fire Academy has incorporated hybrid vehicles into its training at the Concord facility and has put together handouts for fire, police and ambulance departments that can’t make it to a live training session.

“You need to de-energize the source. The (National Fire Protection Association) has downloadable information, a guide on every single vehicle that’s hybrid or electric (including) location of power shutoff, if it’s a cable to be cut, disk to pull out, whatever,” said Tice.

As more all-electric cars arrive, loading with lots more batteries in unexpected places such as under the floor in Teslas, the number of variables that have to be considered on the fly will only increase.

That’s to be expected, said Tice. “Things change for us all the time and we’ll adopt our techniques, our training.”

They’ve been adapting for house fires, too, as solar panels have become more common. My house is typical: It has an outdoor throw-switch to kill the whole photovoltaic system plus a visible warning sticker on the electric panel, both of which are required for permits. Fire crews also have to change the way they attack fires in the top floor or attic of solar homes since you can’t cut your way through rooftop panels like you can through shingles.

Home battery systems that provide power backup are still rare but becoming less so. I haven’t got one but if I did, the outside controls and warnings would reflect it. Still, it’s unlikely that home batteries will ever be as dangerous as propane tanks, or the way homeowners keep dangerous substances around without anybody knowing they exist.

Then there is large-scale stationary storage, in which racks full of hundreds or thousands of batteries are installed in industrial buildings to provide longer-term storage of electricity. They’re the future of our electric grid but they come with issues.

In the worst incident so far, an explosion caused by an unexpected build-up of gases during a fire at a grid battery installation near Phoenix in early 2019 hospitalized several fire-fighters, leading to calls for more research and training. Concern about this from the Littleton Fire Chief in late 2019 was a big factor in killing what would have been New England’s first battery energy-storage facility in that town.

The Training Academy doesn’t have specific modules about stationary storage yet, Anderson said, but that could change.

“I would regard this as just one more thing for fire, EMS. We’ve become an all-hazards kind of agency,” said Anderson. He said a fire at a battery-storage facility would probably be treated more like a fire at an industrial warehouse than a fire at a house. Since there’s little risk of loss of life inside, concern about hazardous materials would prevail, requiring a very different approach. “In my mind, it’s more of a hazmat thing.”